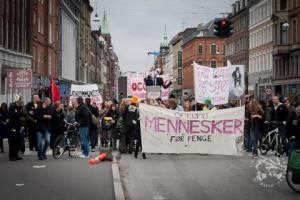 In solidarity with the Occupy Movement’s Global May Manifesto, the Danish faction manifested today a parade in the streets of Copenhagen.

The procession was centred around a four-meter tall effigy of a politician controlled with strings by actors parodying fatcats – or the “1%”, as the OWS movement terms the wealthiest top-notch of society. The climax of the parade unfolded in front of the Danish parliament square, in a dramatic and symbolic cutting of the puppet-chords to symbolize the demonstrators’ protest against financial lobbyism in the Danish government. In addition to the parade, the day was celebrated with concerts and speeches by prominent figures such as Hördur Thorfason, a central actor in Iceland’s refusal to pay the national debt created by rampant speculation that bankrupted the country in 2008, and Anton Nielsen, a Danish freedom fighter incarcerated six months for donating 3000 USD to the organization PFLP – Popular Front for the Liberation of Palestine. The day was wrapped up in front of the Danish stock-exchange with a speech held by a delegation of Spaniards who expressed their profound concerns about the crisis in their homeland. Mikkel Klinge from “Syntestanken” presented the financial crisis as a game of monopoly – and gave a short talk on how we can change the rules of the game.