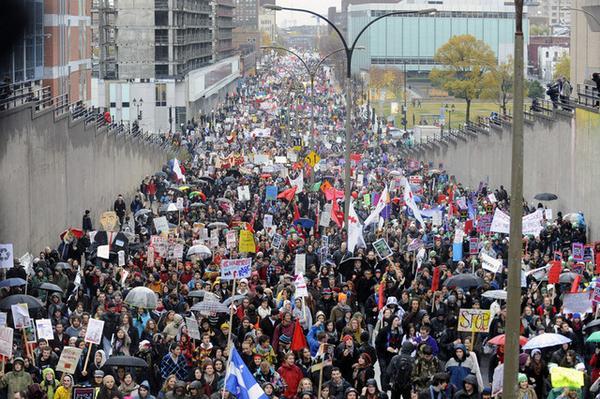 We are living a historical moment in the province of Quebec, Canada. Since 2010, students and progressist forces are striking against an austerity budget of our government. The scolar fees are raised of 143% between 2007 and 2017, so students are striking against this policy and are asking for free education.Students are strinking everyday since 13 weeks now, and the government accepted to negociate after 82 days of strinking but was never open to discuss about the decision of raising scholar fees.

Today, our majoritary government (the liberals of Jean Charest) passed a law, the law 78, that harms totally our fundamental right to protest, to assemble and freedom of expression. All the population is asked to mobilize against this attac to our democratic and fundamental rights. It is the first time it happens in Canada.

Occupons Québec, les indignés de Québec decided democratically last saturday to assemble each saturday pacifically on the public place to continue the movement, and it is possible that we are arrested tomorrow according to this law. In this historical moment, may 18 2012, the population of Quebec needs your solidarity to protect the international rights we are fighting for.

If it is possible for you to support us by going to our ambassy, or the Quebec office in your city to defend the international right of expression, of assembly and of protest, you would give us a great help. Please send this message to the other Occupys and Indignados.

With solidarity and indignation,