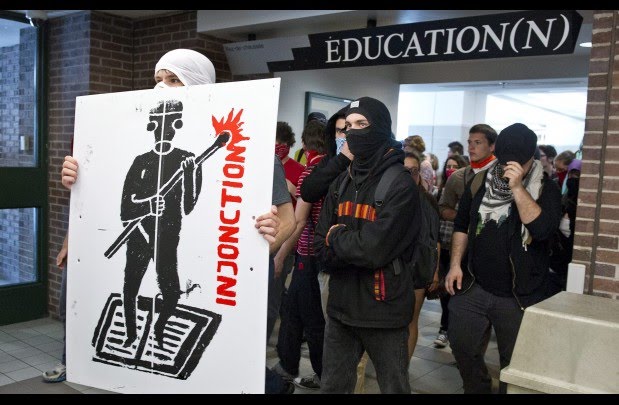 We write you during a dark time for democratic, human and associative rights in Quebec with the following appeal for your help and solidarity. As you have no doubt heard, the government recently enacted legislation that amounts to the single biggest attack on the right to organize and freedom of expression in North America since the McCarthy period and the biggest attack on civil and democratic rights since the enactment of the War Measures Act in 1970. Arguably, this recent law will unduly criminalize more law-abiding citizens than even McCarthy’s hearings and the War Measures Act ever could.

Among other draconian elements brought forward by this law, any gathering of 50 or more people must submit their plans to the police eight hours ahead of time and must agree to any changes to the gathering’s trajectory, starttime, etc. Any failure to comply with this stifling of freedom of assembly and association will be met with a fine of up to $5,000 for every participant, $35,000 for someone representing a ‘leadership’ position, or $125,000 if a union – labour or student – is deemed to be in charge. The participation of any university staff (either support staff or professors) in any student demonstration (even one that follows the police’s trajectory and instructions) is equally punishable by these fines. Promoting the violation of any of these prohibitions is considered, legally, equivalent to having violated them and is equally punishable by these crippling fines.

One cannot view this law in isolation. In the past few months, the Québec student movement – inspired by Occupy, the Indignados of Spain, the students of Chile, and over 50 years of student struggle in Québec; and presently at North America’s forefront of fighting the government’s austerity agenda – has been confronted by precedent-shattering judicial and police repression in an attempt to force the end of the strike and our right to organize collectively. Our strike was voted and is re-voted every week in local general
assemblies across Québec. As of May 18th, 2012 our committee has documented and is supporting 472 criminal accusations as well as 1047 ticket and penal offenses. One week in April saw over 600 arrests in three days. And those numbers only reflect those charged with an offense, without mentioning the thousands pepper sprayed and tear gassed, clubbed and beaten, detained and released. It does not mention Francis Grenier, who lost use of most of an eye when a sound grenade was illegally thrown by a police officer into his face in downtown Montreal. It does not mention Maxence Valade who lost a full eye and Alexandre Allard who clung to life in a coma on a hospital bed for days, both having received a police rubber bullet to the head in Victoriaville. And the thousands of others brutalized, terrorized, harassed and assaulted on our streets. Four students are currently being charged under provisions of the anti-terrorist laws enacted following September 11th.

In addition to these criminal and penal cases, of particular concern for those of us involved in the labour movement is that anti-strike forces have filed injunctions systematically from campus to campus to prevent the enactment of strike mandates, duly and democratically voted in general assemblies. Those who have defended their strike mandates and enforced the strike are now facing Contempt of Court charges and their accompanying potential $50,000 fines and potential prison time. One of our spokespeople, Gabriel Nadeau-Dubois, will appear in Superior Court under such a charge for having dared say, on May 13th of this year, that “I find it legitimate” that students form picket lines to defend their strike.

While we fight, on principle, against this judicialization of a political conflict, we have no choice but to acknowledge that the struggle on the streets has been, for many, transferred to the courtroom and we must act to defend our classmates, our friends and our family. This defense needs your help. Many students have been denied access to Legal Aid to help them to defend themselves. This, while students filing injunctions to end strikes have been systematically granted Legal Aid. While sympathetic lawyers in all fields of law have agreed to reduced rates and alot of free support, the inherent nature of the legal system means we are spending large sums of money on this defense by the day.

It is in this context that we appeal to you to help us cover the costs of this, our defense. Not only must we help those being unduly criminalized and facing injunctions undermining their right to associate, but we must act now and make sure that the criminalization and judicialization of a political struggle does not work and set a precedent that endangers the right to free speech and free assembly.

If you, your union, or your organization is able to give any amount of financial help, it would make an undeniable difference in our struggle. In addition to the outpouring of support from labour across Quebec, we have already begun to receive trans-Canadian and international solidarity donations. We thank you for adding your organization’s support to the list.

If you have any questions, please contact us via email legal AT asse-solidarité.qc.ca <http://xn--asse-solidarit-okb.qc.ca>. Telephone numbers can be given to you in a private message. You can also send you donation directly to the order of “Association pour une solidarité syndicale étudiante” (2065 rue Parthenais, Bureau 383, Montréal, QC, H2K 3T1) noting “CLASSE Legal Committee” in the memo line.