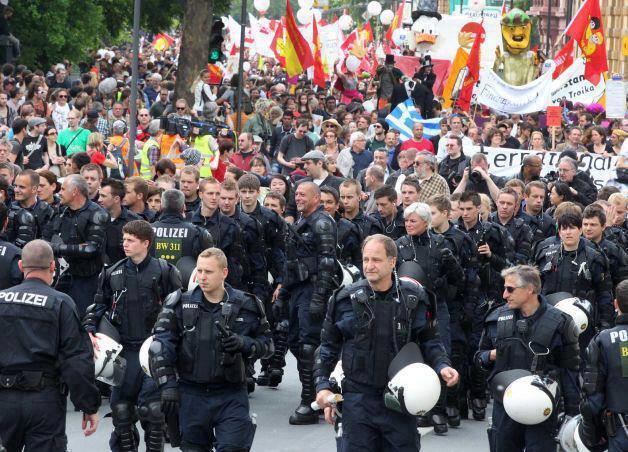 “In order to correct rumors spreading on Facebook, mostly linked to a picture of police forces in front of our May 19 demonstration, we need to explain the following:

POLICE NEVER JOINED OR SHOWED SOLIDARITY IN ANY WAY WITH THE BLOCKUPY FRANKFURT PROTESTS.

Their strategy always was to fabricate retroactive legitimacy for the city’s bans of our protests by trying to escalate peaceful situations (as shown in the video below). The city of Frankfurt and the authorities staged a state of emergency, claiming that political activists were potentially violent by intent and illegally arresting over 1400 persons. The police strategy was obvious: to not allow us to rest, talk with each other or come together. Even during the night they constantly followed us around and tried to provoke us. On Saturday, police forces stopped and held many persons who had traveled great distances by car, train or bus to join our legalized demonstration, and they even turned people away.
We had to struggle the whole time to maintain our right of assembly and to be able to carry out our demonstration. Claiming that the authorities and/or the police supported us in any way is a heavy blow in the face of those fighting for our cause and who were subject to the unacceptable treatment of police forces imposed on us from May 16-18.