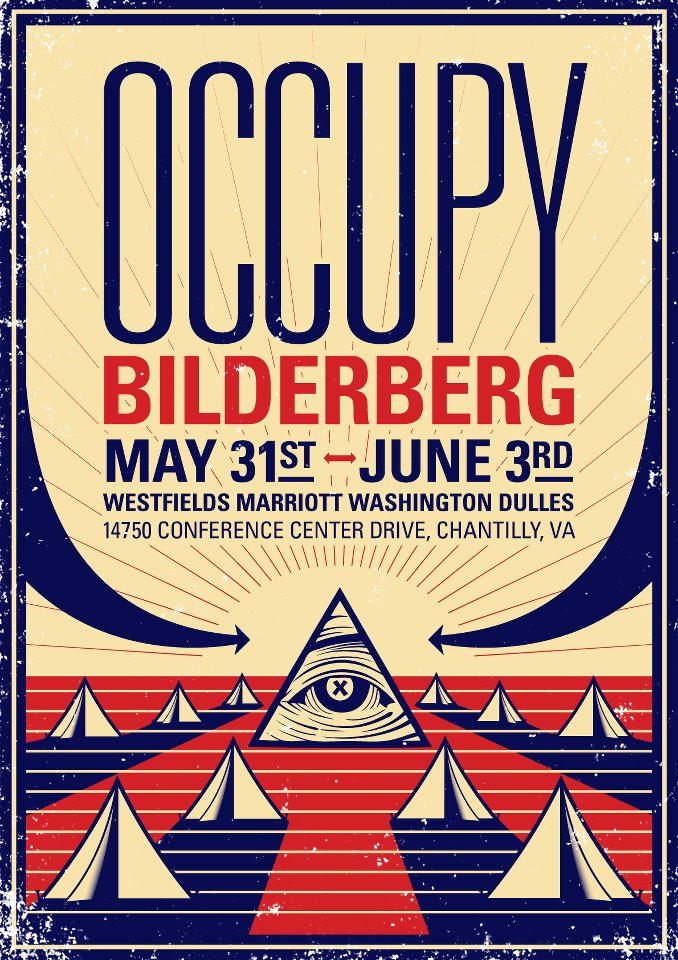 It is now confirmed that the Bilderberg Group will hold their 2012 conference at the Westfields Marriott Washington Dulles hotel in Chantilly, Virginia from May 31st to June 3rd.

The Bilderbergers hate the spotlight. It’s only in recent years that the media has even acknowledged their existence and the group itself, comprising some 120 influential power brokers in the fields of business, politics, media, academia and banking, has been forced to set up a website and issue a yearly press release.

This is thanks to the fact that ever increasing numbers of protesters are gathering outside wherever Bilderberg meets to demonstrate against the elitist confab’s role in secretly steering world events outside the purview of democratically elected governments.

Following Jones’ call to occupy Bilderberg, the grass roots activist community has gone into overdrive. A detailed Facebook page has been set up along with a website in addition to numerous other alternative media websites who are getting on board with the event.

We urge as many people as possible to travel to Virginia at the end of the month to do what the maionstream media habitually fails to accomplish – speaking truth to power and demanding answers as to why Bilderberg attendees think they can break their own country’s laws, such as the Logan Act in America and its equivalents elsewhere, by meeting secretly with foreign agents while serving in public office.

As we have exhaustively documented, there are numerous examples to illustrate the fact that Bilderberg is not merely a “talking shop” as some in the corporate press frame it, but a venue where consensus is formed for the implementation of both national and geopolitical policies.

In 2009, Bilderberg chairman Étienne Davignon bragged about how the Euro single currency was a brainchild of the Bilderberg Group.

“A meeting in June in Europe of the Bilderberg Group- an informal club of leading politicians, businessmen and thinkers chaired by Mr. Davignon- could also ‘improve understanding’ on future action, in the same way it helped create the Euro in the 1990s, he said,” reported the EU Observer in March 2009.

The foundations for the EU and ultimately the Euro single currency were laid by the secretive Bilderberg Group in the mid-1950’s. Bilderberg’s own leaked documents prove that the agenda to create a European common market and a single currency was formulated by Bilderberg in 1955.

As we first reported in 2003, a BBC investigative team were allowed to access Bilderberg files which confirmed that the EU and the Euro were the brainchild of Bilderberg.

In spring 2002, when war hawks in the Bush administration were pushing for a summer invasion of Iraq, Bilderbergers expressed their desire for a delay and the attack was not launched until March the following year.

In 2006, journalists who got leaked information from inside Bilderberg predicted that the U.S. housing market would be allowed to soar before the bubble was cruelly popped, which is exactly what transpired.

In June 2008, we learned that Bilderberg were creating the conditions for a financial calamity, which is exactly what began a few months later with the collapse of Lehman Brothers.

Bilderberg has habitually flexed its muscles in establishing its role as kingmaker. The organization routinely selects presidential candidates as well as running mates and prime ministers.

Despite widespread expectation that former British Prime Minister Tony Blair would be announced as the first European Union President, the former Prime Minister of Belgium, Herman Van Rompuy, was picked for the role just days after he attended a Bilderberg Group dinner meeting.

Bill Clinton and Tony Blair were both groomed by the secretive organization in the early 1990’s before rising to prominence.

Barack Obama’s running mate Joe Biden was selected by Bilderberg luminary James A. Johnson, and John Kerry’s 2004 running mate John Edwards was also anointed by the group after he gave a glowing speech at the conference in 2004.

Despite the fact that the establishment media, many titans of which are Bilderberg members, routinely plays down the weight of the group’s influence on world affairs, in a 2010 radio interview former NATO Secretary-General and Bilderberg member Willy Claes admitted that Bilderberg attendees are mandated to implement decisions that are formulated during the annual conference of power brokers.

Although the topics on the agenda are usually disclosed during the course of the Bilderberg meeting, we already know that the group will have an influence on picking Mitt Romney’s running mate for the U.S. presidential election, with Florida Senator Marco Rubio being the firm favorite.

Rubio recently flaunted his “foreign policy chops” during a Brookings Institution speech in which he called for the U.S. to attack Syria and Iran.