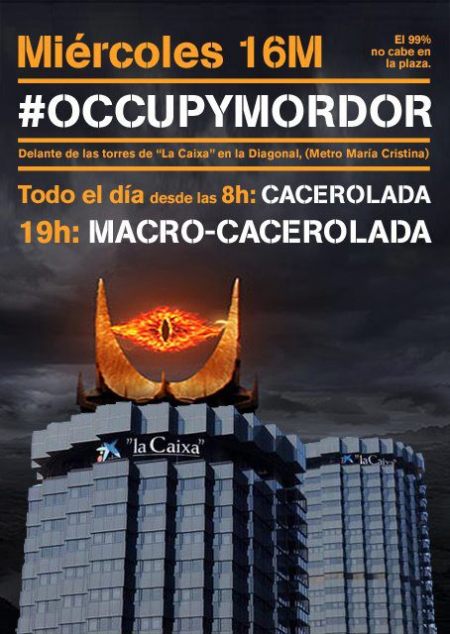 “The hobbits united will never be defeated!” #OccupyMordor continues in Barcelona, against a huge bank via @okokitsme pic.twitter.com/PF2d1tL9

THIS SPRING WERE NOT INTERESTED IN THE SQUARES
WERE GOING AFTER THOSE RESPONSIBLE
THIS 2012 WE OCCUPY MORDOR:
THOSE WHO ARE RESPONSIBLE FOR EVERYTHING
WERE NOT GOING TO ALLOW IT

WE (#NOSALTRES) ARE THE 99%
PERMANANT CACEROLADA* INFRONT OF MORDOR
#CAIXAROLADA
#OCCUPYMORDOR
* CACEROLADA = Banging of pots and pans, a popular form of protest in Spain, as it was in Argentina in 2001
**Caixarolada = Cacerolada against the main Spanish bank La Caixa

“We are going slow, because we are going far!” This is the slogan from the Indignados of Spain, the indignant ones, who since May 15th 2011 have being engaged in a peaceful revolt against the harsh austerity measures being imposed in Spain, against the fact that Spain has the highest unemployment rate in the developed world (24%, 50% for the less than 25′s), against political corruption and cronyism and for a better world. We here in Spain were influenced by the uprisings of the Arab Spring and the gentle reclaiming done and still being done on the island of Iceland. Since last year a lot has happened, inspired by the goings on here in Spain, people in New York decided to try to do the same there and that has led to the phenomenal success of the Occupy Wall Street movement and related groups globally.

We are in a terrific moment of change, although life is getting increasingly difficult for many in Spain, it is also very exciting to feel like we are fighting to change things around and that we can win. Belief in winning is key to all this, we are not simply “fighting the good fight”, we are fighting to win and we fully believe we will get there. Key to winning is strategy, from day 1 the #SpanishRevolution has been explicitly nonviolent, as has the occupy movements, this has allowed the movement grow from strength to strength as more people get involved. But, there have been some random acts of violence by black block and / or undercover police, Chris Hedges (US journalist and war correspondent) has spoken very well on why we need to avoid such confrontations. Here in Barcelona, a city which has had a very bloody and violent history, there has been many moments of police violence in the past year and there were violent clashes during the recent 29M general strike (29th March). Many were afraid that there would be more acts of violence and destruction on the big #12M15M celebrations to mark the 1 year anniversary of the #SpanishRevolution, which began last saturday, 12M. Most things went to plan but in Madrids Puerta del Sol there were violent arrests and evictions each of the 4 nights, indignados made accusations of police violence. In Barcelona there was no violent moments and once again the city is buzzing, heres a short review of what has gone on:

#12M Last Saturday, was massive and amazing, upto 200,000 people took to the streets. Leaving from and returning to our spiritual home; Placa Catalunya, where indignados occupied and lived in the square for 3 nights. The Catalan minister of the Interior, Felip Puig, had agreed that people could occupy the space from Friday untill Tuesday night, 15M, the actual birthday date. There were stereo #Occupy actions to coincide with this day all over the world. Also in the square, from Friday at 6pm till Tuesday evening, there was a Peoples Forum, a series of workshops and open discussions related to how we can get ourselves out of the crisis. Sitting in the square that night, after the many noisy hours in the streets, listening to the general assembly, shaking hands in agreement and later chatting with friends, we knew for sure that the #SpanishRevolution is back… We’re going far!!!

#15M Another really big day, it started early with people going to concentrations outside banks in different barrios (neighbourhoods) of the city. Outside one of the branchs of La Tarrassa, at the intersection of C/Sal del Cent and Passeig San Joan, the road was blocked for a few hours while people who recently lost their homes to the banks went about setting up meetings with those banks in the future, an important step for these people, already deep in crisis.

At 1pm people met at Placa Catalunya and hundreds marched together through the streets for a peoples picnic of sorts outside the headquarters of the PP offices in Catalunya, the PP are the conservative party in power in Spain who are bringing in all these austerity cuts which are hurting people so badly. At 4pm people finished up and marched up to Diagonal, at this point the crowd had reached about 2,ooo. 3 lanes of Avenue Diagonal were taken over by the crowds and at this point people were surrounded by the Mossos (local Catalan police force) riot squad, who escorted them all the way up to #OccupyMordor, the main offices of the bank La Caixa. After a half hours break there was a Peoples Court to assess the culpability of the banks in causing this crisis, robbing people of their own money, taking over their homes and kicking them onto the street becuase people cant pay their mortgages… 3 People, well puppets representing these white coller thieves, were put on trial and all were found guilty (see full trial vid below). All were dealt with by the guillotine. After that a very loud Cacerolada began, followed by a general assembly. Many ideas were discussed and some proposals were backed by all there through consensus, including the idea to stay in this space, to #OCCUPYMORDOR and to hold out untill the bankers have been put in jail. Some 20 or 30 people spent the night sleeping outside Mordor, but police arrived at 1am and took identifaction details of all invovled, if people have details taken a second time in a similar manner they can be given a hefty fine.

Everyday since 15M at 8am and 7pm there are popular caceroladas (pot banging sessions) and the numbers attending to bang make noise is growing daily. Whereas in Placa Catalunya the acampada was a huge space, it was not a zone very highly frequented by local people, its mostly tourists who arrive there after going up the Ramblas. Now at Mordor the indignados are based around one of the busiest working areas of the city, at rush hours people are coming in and out of the metro station to work in their offices. Another hugely positive point is that the site is right on Avenue Diagonal, the main transport artery into the city. This has allowed for a great show of support from those in vehicles going by the indignados; cars, buses, lorries all beeping their horns and waving fists in support. It is an amazing thing to be up there, banging pots and pans and police barracades… the noise is deafening… THIS SPRING WERE NOT INTERESTED IN THE SQUARES… WERE GOING AFTER THOSE RESPONSIBLE.

#22M Things are growing and growing and yesterday there was another massive show of strength; 150,000 people took to the streets in an education strike to support public education and fight against more government cuts. The Yellow wave was seen everywhere in town.

Here are 3 #OccupyMordor vids
NOSALTRES MAI NO HEM MARXAT #CAIXAROLADA PERMANENT 8h 14h 19h #OCCUPYMORDOR
(WE WILL NEVER LEAVE. PERMANENT #CAIXAROLADA 8h 14h 19h #OCCUPYMORDOR)
**Caixarolada permanent a les Torres de Mordor: #OccupyMordor
(Permanent Caixarolada at the towers of Mordor)
JUDICI POPULAR A LA BANCA
(Peoples court at the bank)
Why all the fuss? I direct you to a fine essay, from ROAR written by Jerome Roos: The meaning and necessity of revolution in the 21st century

The global day of action on May 12 will mark the resurgence of our resistance. But what is the way forward for our movement in these times of crisis?

On the Edge of History

We are living through historic times. While the future may look bleak and uncertain, we are – in our own particular way – blessed to live through an era in which the very word ‘revolution’ is no longer just the abstract obsession of some fringe romantics inside the Old Left. We are living through a time in which the word capitalism no longer invokes hard work and ample reward, but the lack of work and opportunity for a growing number of people around the world. This is a time in which the very existence of revolutionary theory and practice is no longer considered just an academic or activist privilege, but a pressing global necessity and – increasingly – a factual reality on the ground.

In a recent artilce from EL PAIS, it stated: The 15M increases its citizens support, After the 1 year anniversary mobilisations, 68% express sympathy with the movement, after a year. 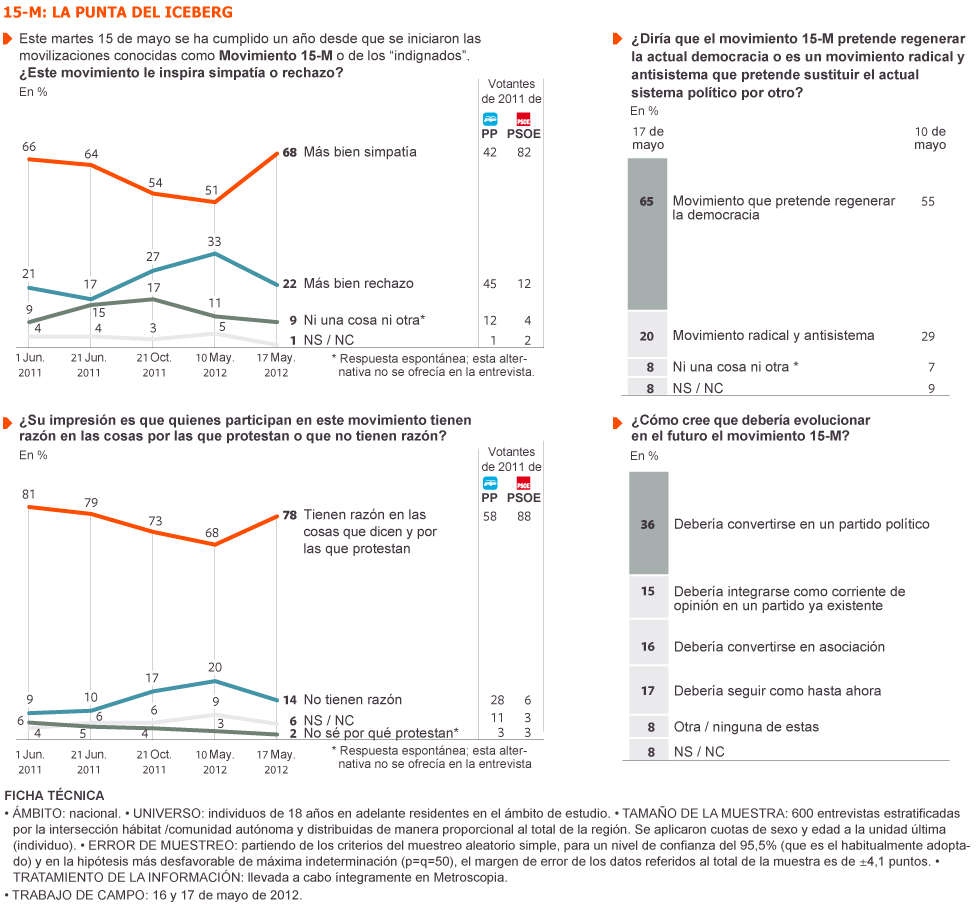 #VagadeFam: Lastly, 1 man has taken the most extreme step to attempt to get the government to change their mind: HUNGER STRIKE. A 28 year old man, Adrià Torres, from Manresa, has been sitting for the last week in the main political square of the city, Placa Sant Jaume, and will remain there till they change their minds.

The fellowship of the pot…

The Boss, Bruce Springsteen, dedicates “Jack of all trades” to the INDIGNADOS (the indignant ones) in CATALUNYA at his concert in the olympic stadium last night in Barcelona City, he spoke in the local Catalan language.

Arranca el juicio a la banca, guillotina preparada.
The trial has started at the bank, the guillatine is ready