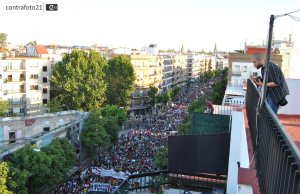 The tide of public sector cuts continues to ravish the European education system. Attacks on Spanish universities began with the passing of Plan Bolonia, which intended to commoditise tertiary education. Higher productivity was sought through a shorter and more intense university experience, resulting in the cutting of class time and a hefty increase in course work. Under the recently elected right wing government of the Partido Popular (PP), as part of an austerity agenda, cuts to education have intensified the detrimental nature of the proposed changes.

A population that suffers from the highest European youth unemployment is expected to levy the sharply increased tuition fees. Figures from the country’s leading newspaper El País underlined the average degree will rise in cost by some €540. In some cases, for those repeating subjects, fees could face a 100% rise. According to the Ministry of Education, repeating a module for the fourth time could cost in the region of 5000 to 7000 Euros, which is double the cost of an entire academic year. To add to this, cuts to education have been projected to be around 3 billion Euros. Such measures will only prevent the majority of students from completing degrees and will ensure university education becomes less accessible to those with lesser financial means.

In response to the passing of such reforms, a nation wide education strike took place on 22nd May. Thousands across the country marched against the cuts, protesting especially against the endangering of public universities. However, in the Andalusian capital of Seville, the movement has subsequently gained in strength. Both the student and teaching bodies have called a two-week strike to highlight the violent nature of the proposed measures.

Many have protested against the strike on the grounds that it prevents teachers from the right to work and students also who are currently in the height of their examination period. This measure was agreed upon however by the student union CADUS in conjunction with professors. The latter group argued that a strike was the only viable means of protest given the lack of dialogue the current minister of education had presented regarding the reforms.

The movement boasts strong support in numbers. General assemblies over the last two days have officially registered 2100 attendees. Similarly, the occupation of the central faculty has ranged in the thousands, with students spilling out of designated classrooms into passageways. Areas of study have nevertheless been preserved, as it was agreed in the general assembly that despite the lack of classes studying would continue in preparation for exams.

The merits of this movement are surely its long-term objectives and intentions to widen the frontiers of the struggle against cuts. Motions at the general assemblies in Seville have moved to encourage other Spanish universities to follow suit, in order to create a unified agenda. Students have also organized protests outside the Andalusian Parliament, while momentum is being further built upon through the calling of another march on 30th May. Plan Bolonia was in fact blocked in Greece as a result of months of academic mobilization in universities. In the fight to save public education from a private austerity agenda it serves as a lesson to the burgeoning Spanish student movement.