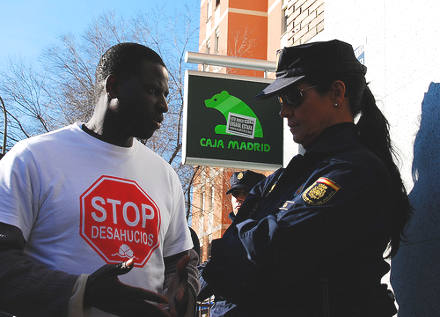 The process begins pointing at Rodrigo Rato (second vice president of Spanish government and Minister of Economy between 1996 and 2004, and just-resigned Bankia chairman) and plans uncover the bad management of politicians and bankers responsible for the crisis, proposing to end with the impunity of their acts and behaviour.

May 23, 2012. – Members of various groups participating in the 15M movement (’spanish indignados’); DRY (Real Democracy Now) with its Citizen Rescue Plan, the PAH (platform of affected by mortgages), the Citizen Debt Audit platform, X.net, #CierraBankia, TomaTuBanco (’take your bank’), Democracy 4.0, # OpEuribor, Iaioflautas (elder activists), TomaParte and many others, have coordinated this specific initiative.

Through citizen journalism, curated by Minileaks website, volunteer lawyers and groups of experts in financial crime; the project collects anonymous information that any citizen wishes to give to uncover civil, criminal and ethical implications of this “crisis” and prosecute those responsible … starting specifically with Rodrigo Rato.

The people have decided to do what governments will never do.

What is proposed with @15mpaRato campaign? Why Rodrigo Rato?

#15MpaRato considers it essential for Spain to start a process similar to the Icelandic experience, including trials to point out those responsible for this scam called “crisis.”

Rato’s C.V. embodies [the paradigm of politicians that jump from one millionaire position to another http://15mparato.wordpress.com/tag/1000culos] (Spanish) without an audit of their management.

On May 7th 2012 Rodrigo Rato announced he was leaving his post as president of Bankia, in exchange of a compensation of 2.1€ million, just before the bank sunk and the government gave away 10,000€ million public money as a reward.

Rodrigo Rato leaves the bank where he earned 2.34€ million a year without any audit or report on his work, having turned Bankia into the most relentless institution with those affected with mortgages and the leading entity evicting families from their homes.

Rodrigo Rato left the IMF on June 19th 2007, without completing his term as managing director and with a devastating report on his management, at the time this crisis was brewing (Spanish).

He also held the positions of Second Government Vice President and Minister of Economy between 1996 and 2004, without an investigation on his responsibility in the “Gescartera” scam or his role as one of the architects of the Spanish housing bubble.

The groups involved in this campaign think that Rodrigo Rato is as good a target as any. The campaign starts with him, but it will continue with the rest.