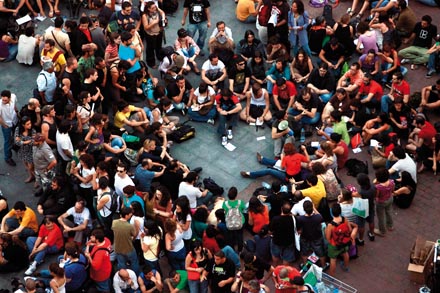 This text was published in the 173 issue of DIAGONAL by Amador Fernández-Savater is a Spanish author, editor of Acuarela books and freelance researcher.

“More wood, this is war!” The train in the Marx Brothers’ film is the most accurate picture of present-day capitalism. Running away, fleeing forward, dismantling itself to further fuel the machine: destroying rights, guarantees, life, wealth, resources, care, bonds, the entire building of modern social civilization. The mad rush of capitalism threatens to bring everything down with it. There is neither an overall plan nor a long-term prospect: just take all the wood necessary to keep the machine running. Capitalism has gone completely punk: “no future”.

Deep down, something is broken. We act as if nothing has happened, but we know it. The general feeling is that “everything has become possible”: for the EU to expel Spain from the euro, a bank run, a ‘corralito’ or an insurrection. Just anything. But we cling to the more remote possibility: that things just stay the same, that we return to “normal”. Capitalism is improvising, but so are the movements that oppose it. No compass is of any use now, the maps that we have are falling from our hands and we have no idea where we are heading. The only thing that we can do – or so it seems – is to follow the events of the day: the King’s speech yesterday, Repsol’s troubles today, and tomorrow we’ll see. Time is out of joint.

Protest seems pointless. Despite more than ten general strikes the Greeks have been unable to slow down the absurd speed of the locomotive even slightly, or even to decrease its terrible destructiveness. It is as if the powers-that-be have been disconnected from society and there is no way to reconcile them. It is scary indeed. The pace of capitalist destruction has been multiplied by a thousand since 2008. Achievements that required decades of work and struggle are being cancelled in seconds. And we don’t know how to stop this.

If everything has to go down, we can at least take part in the sinking. A friend told me that in Barcelona the tolerance for street violence during the last general strike was massive: “you cut, I burn.” A legitimate response (what is burning a waste container compared with burning millions of lives?). More wood, this is war: cuts, repression, lies. The normal, obvious reaction, is anger, hatred, violence. Legitimate – and indeed useless. Your head keeps banging against the wall, your anger growing stronger, blind and desperate. But the wall does not yield.

They set the agenda.

They set the time frame.

They set the stage.

Has anyone out there seen Michael Collins? The movie about the life of the Irish revolutionary leader opens with a re-creation of the Easter Rising of 1916. The IRA has momentarily taken over an official building, but the English are about to chase them out. This isn’t the first time: in line with the rules of conventional warfare the IRA is losing all the battles. Within the organization there are those who think that the continuing “blood sacrifice” contributes to the birth of the Irish nation: repression brings new recruits to the cause, and new uprisings. Worse is better.

Michael Collins thinks nothing of the sort. While in prison, he reflects on this and proposes a radical strategic shift: “from now on we must act as if the Irish Republic was a fact. We will defeat the British Empire by ignoring it. Not by following their rules, but by creating our own”. Thus began a historic guerrilla war, which for years made the British go mad, and ultimately forced them to negotiate the first peace treaty giving independence to the Irish.

What Collins decides is to stop banging his head against the wall. He does not simply want to be right, nor is he ready to sacrifice anyone for the sake of a better future. What he wants is to live and to win. And winning implies the creation of another reality, concretely: to truly counterattack, the opposition must start building a new reality, which is paradoxically based on a fiction (we should act as if the Irish Republic was a fact).

Fictions are serious things. The eighteenth-century French revolutionaries decided to “act as if” they were no longer subjects of the ancien régime, but citizens able to think and write a constitution. The proletarians of the nineteenth century decided to “act as if” they were not the mules that that reality forced them to be, but people like the others, able to read, write, speak and organize themselves. And they changed the world. Fiction is a material force as soon as we believe in it and organize ourselves accordingly.

So let’s not complain, resent, react, or sue, but rather, act – act as if the Republic of the 99% was a reality. Instead of playing their game by their rules, let’s fight to ignore those rules and create others. What could this mean?

I guess the first thing of all would be to issue a statement declaring a massive break with the corrupt reality of economics and politics. A serene, quiet, gesture to convey just one message: “you’re fired, we say goodbye”. It would be like our Tennis Court Oath. Then we should infer what possible, practical consequences would derive from the impossible: if the Republic of the 99% was a reality, what would it be? We would set the time frame, the subjects and the scene. Make them exist and be respected, and make them last and grow. In short, inhabit here and now another country: real and fictional, visible and invisible, intermittent and continuous.

The best way to defend something is to reinvent everything.

Not for you and your folks, but for the 99% (we’re all riding on the same train).

And our revenge is to be happy.