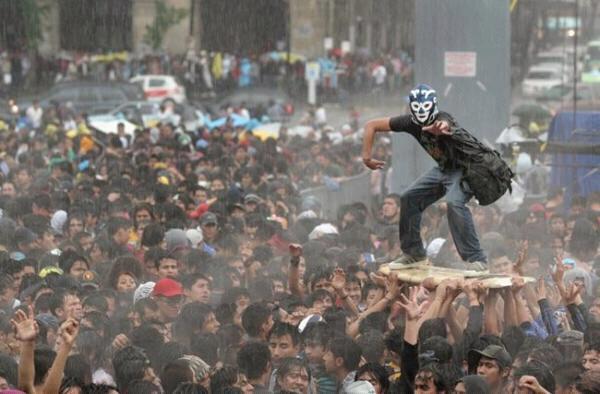 The current situation in Mexico demands its youth to take the present in their hands. It is time for us to fight for a change in our country, it’s time that we strive for a Mexico that is more free, more prosperous, and more just. We want the current situation of misery, inequality, poverty, and violence to be resolved. We, the youth of Mexico, believe that the current political and economic system does not respond to the demands of all Mexicans.

We, the students united of this country, believe that a necessary condition to correct this situation is to empower the common citizen through information, because it permits us to make better political, economic, and social decisions. Access to information allows citizens to demand and criticize, in a reasoned manner, their government, policy makers, businessmen, and society itself. That is why the main demand of YoSoy132 is the right to have access to information and the right of freedom of expression.

Today, the youth of Mexico has lit a light in the public life of the country. Let us take on this historic moment with bravery, responsibility, and integrity. Let us not wait any longer. Let us not be silent any longer. We, the youth, say, “Present!”

To the national and international media, to the relevant government bodies, to the general society of Mexico, YoSoy132 declares:
First. We are a nonpartisan movement made up of citizens. As such we do not express signs of support to any candidate or political party, but we respect the plurality and diversity of the members of this movement. Our desires and demands focus on the the defense of freedom of expression and the right to have access to information; with the understanding that both of these are essential to form a conscientious and participatory citizenry. Therefore, we promote an informed and reasoned vote. We believe that the current political circumstances, abstaining from or not voting are ineffective actions to advance the construction of our democracy. We are a movement concerned for the democratization of the country; as such, we think that a necessary condition to achieve this involves the democratization of the media. This concern stems from the current state of the national press and from the centralization of the media in the hands of the few.

Second. YoSoy132 is an inclusive movement that does not represent only one university. Its representation depends only on the people who join this cause, which is articulated through the university committees.
In essence, our movement seeks the democratization of the media in order to ensure transparent, plural, and minimal standards of objectivity to promote awareness and critical thinking. This is why:
We demand real competition in the media sector, particularly with regard to the media duopoly of Televisa and TV Azteca.
We demand that all media (radio, television, and print) incorporate instruments to safeguard the public interest.
We demand that the various schools of communication publicly bid for their public channel’s license.
We demand that access to Internet be a constitutional right, under the terms established in Article 1 of our Magna Carta.
We demand that there be spaces for debate between youth, academics, and the media about the above demands.
We demand the safety for the members of this movement, who express themselves freely throughout the country, and for particular journalists, who have been struck by violence. Furthermore, we express absolute solidarity with the people who in recent days have been suppressed in different states of the republic for expressing their ideas.

Our immediate demand is for a national televised broadcasting of the debate of the candidates for the presidency of the republic. This is not an imposition on a privileged audience, but rather its a way to guarantee the right to choose to either see it or not, to those who today do not even have that possibility.

To the university students and to the youth of Mexico: this movement calls on you to organize, to join and make these your own demands and to express them, especially using your creativity through culture!