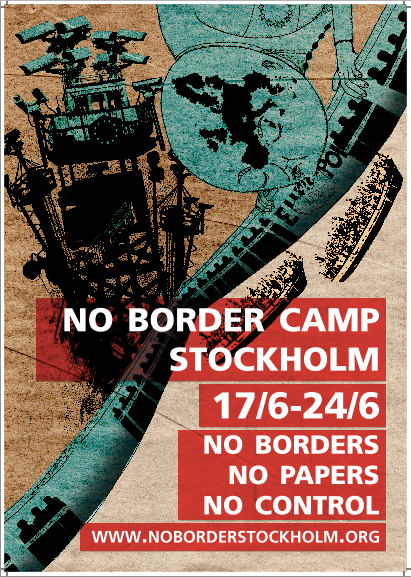 12 million refugees are in the world today.
235 900 people applied for asylum in EU in 2010 but only few were permissible to stay.
2000 people died in the Mediterranean sea in 2011 when they tried to reach EU from Libya and Tunisia.

WHAT IS A NO BORDER CAMP?

Since the 1990s, action camps have been taking place under the name ‘No border’ to put focus on the borders that separate people. Regardless of whether the focus has been borders that the state maintains or those that capitalism establishes, the camps have served as autonomous free zones – built by people to bring together all the various fights against borders and migration policies, to share knowledge and experiences and take direct action against an authoritarian society, of which borders are the most visible manifestation.

No Border is no organization but a concept, an idea. It is about fighting for a world without borders, where everyone has the possibility and no one is restricted from moving freely across the globe without ever being called illegal.

Borders affect us all, yet they affect us differently depending on gender, class and ethnicity. The violence and control of the state does not only occur at external border zones but also at airports, hospitals, ports, subways, schools, work places, streets and squares. It is spreading like a poison gas in the air we breath and becomes a part of our daily life. The constant hunt for non-European migrants legitimizes persecution of everyone who does not seem to fit in. Borders create racism.

Border politics is joint within the EU and Sweden has a active role in this. In the European Union non-European persons who cross borders are being criminalized, put in prison and deported: migration is talked about as a security threat these days. In Sweden it is also bound to be more effective and cheap. It is made more effective through specially trained plain clothes cops working together with the tax office who conducts raids in work places, quicker decisions and executive deportation orders, and co-ordinated mass deportation in joint FRONTEX flights. This year the deportations increased 40 %.

People in the insecure situation which the borders create are exploited by capitalism. It creates workers who are a cheap and an expendable work force for the state and it’s private contractors. Workers who are exploited while at the same time being used for undermining salary levels and the social safety nets. Border politics enable corporations to make big money on serving the state’s deportation machinery with control services, identification and surveillance because of a security need the border politics have invented.

The violence of the borders are always kept silenced. In closed of arrests people are being led with handcuffs, diapers and stuffed with sedatives to a waiting plane from the cargo entry. The detention centers are built in the outskirts of cities, hidden in industrial areas or far away from the public eye. Corporations can without a problem make money with no responsibility in an extremely well paid sector.

But this is something we never have a moral obligation to accept or maintain. Borders are constantly unmade by being crossed without the right papers; the system of citizenship challenged by persons trying to exist in spaces without citizenship; walls overpowered by being climbed over and escaped from. We call upon all people to take their rage against the borders to the streets in Stockholm and break the silence by confronting the border violence. We call upon a week of direct action against the border- and security politics. Come to Stockholm and show your resistance and dissent against racism and your love for a world without borders, control and papers. Come and destroy what’s oppressing us and create something new.

WHAT ARE THE GOALS OF THE CAMP AND IT’S ACTIONS?

PRINCIPLES OF THE CAMP:

HOW CAN YOU SUPPORT AND HELP WITH THE CAMP?

A self-organized camp will be nothing but what we make of it. Everyone is able to participate and find their own roles in making a No Border camp happen!