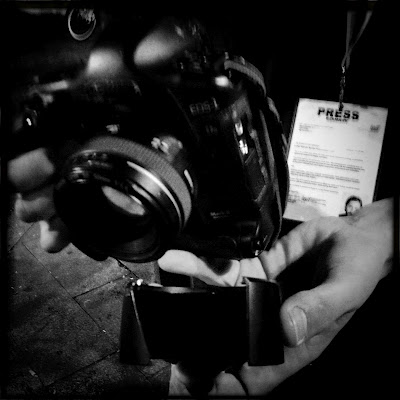 Three hundred indignados demonstrated on Wednesday afternoon at the Puerta del Sol because of the rise in risk premium. 15M protesters decided in the deliberative assembly on Monday to hold a saucepan-banging demonstration in front of Puerta del Sol, after the escalating distrust of markets overcame the barrier of 500 basis points. Celebrations to commemorate the movement anniversary were going on pacifically, as in previous days. After an hour of songs, beeps and a saucepan banging, 15M protesters decided to march to the Bank of Spain. Two police cordons of riot policemen blocked the way leaving them literally locked. Media reporters that accompanied them were caught in the same circle.

The tension was maintained for nearly an hour as the circle narrowed and supporters came to the other side of the fence, called from social networks. Some people tried to leave to avoid being caught in the police charge, but finally, riot policemen offered a way out for those if they went out pacifically. Before the indignados decided to accept the offer, the police cordon blocking the entrance to Sol disbanded. Happy people chanted “Yes, we can” as they ran to embrace the other indignados waiting them at Puerta del Sol. “It’s over kidnapping citizen,” some shouted. It was at that moment when one riot policeman came out from behind the police cordon that stood in the street Alcala, headed Javier Zurita, photojournalist from the German Agency Laif and, without a word, threw his camera to the ground.

Zurita was photographing a few riot policemen that were discussing with protesters and he could not see the policeman, who headed him without being noticed. “He hit my camera on purpose to throw it to the ground. The lens is now broken and the camera is damaged”, the photographer says. The riot policeman left rapidly ignoring Zurita’s claims. The policeman headed his group and fellow policemen closed ranks, preventing the passage of Zurita. The photographer tried to catch the aggressor, but he had disappeared in the row of comrades who claim to have seen nothing. “The policeman was not identified but there were six colleagues who have seen it all,” says Zurita.

The German agency photographer went to ask for explanations to the riot policeman head, and he, quite rightly, said that he did not know the situation and apologized for any possible incident that could have happened. “Policemen should not act in such a way. I will try to find out what happened, but of course if you do not know who did it, we cannot do anything.” Another officer asked: “Isn’t your camera covered by the agency?” The photographer could not identify the policeman because he was not wearing the plate number on his jacket. Riot policemen head said: “This behavior may have been an unfortunate event, but it is not our way of proceeding”.
Javier Zurita asked: “If this is not the way you normally proceed, I cannot understand how this is constantly happening in recent days. If you act this way with media workers, what will you do with people with much less visibility? I have to be identified and I can be tried if I act badly, then, why aren’t riot policemen wearing their identifications visible? And so, if a new unfortunate event happens again, we can report the aggressor to the police.”
A short distance away, there was another photojournalist, Javier Bauluz, part of a team of Pulitzer prize-winnig photographers from Associated Press, who says in a video how he was rebuked by riot policemen on 12th May, when the protesters were evicted from Puerta del Sol (Minute 3.35). He says he was covering the eviction information when the police began to push him: “I got hit in the face and back even though I identified myself as a journalist. They accused me of being blocking the Gran Via. Do I block the Gran Via alone?”. His aggression is another one added to several aggressions to media reporters.
Some photojournalists were literally expelled from Puerta del Sol the day of the first eviction on the grounds that they should stand behind the police cordon. “I was taken to Callao being pushed because it was assumed that there was the police cordon there. How am I going to take pictures if they’ve pushed me for ten minutes away from what’s happening?” one reporter said. Gabriel Pecot, photojournalist, comments: “Police acted with violence towards us, preventing us from working during the evictions, despite being clearly identified as press”.
Bauluz has just published evidences of these acts: “We have pictures and videos. They cannot treat the press that way. We only come to do our job”. (watch here all the evidences)