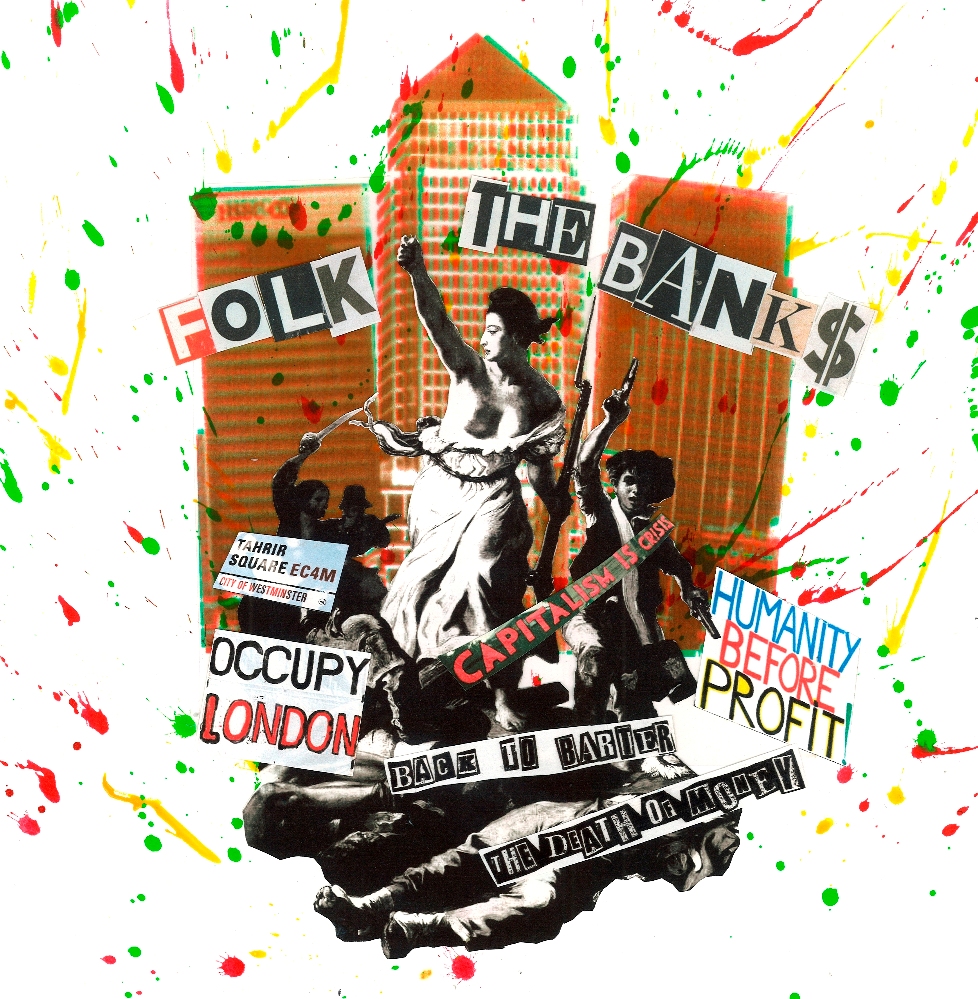 Hey and solidarity from London,
The day has finally come –  the Folk the Banks album by Occupation Records – created by occupiers from Occupy London to help fund Occupy and related movements – is out! Available as Pay What You Can Afford for digital downloads (plus CDs, vinyl, T-shirts etc) the album features Tom Morello, Ani DiFranco, Billy Bragg, Martha Wainwright, Get Cape. Wear Cape. Fly, Chumbawumba, Peggy Seeger, with iconic artwork by Jamie Reid – famed for the Sex Pistols’ ‘God Save the Queen album artwork. Press release is below with more details.
We’d be very grateful if you can help spread the word via your networks to make sure the word gets out – http://www.occupationrecords.com/. We’ve got lots more coming up – albums, gigs, community events – and will be in touch! Will also – fingers crossed – be announcing how people can apply for funding shortly depending on how successful this is!
Lots of love from Occupation Records x
Folk the Banks! Occupy benefit album now out – Pay what you can afford downloads!
An experiment has begun! ‘Pay what you can afford’ for the Folk the Banks album out now featuring Occupy supporting artists including Tom Morello, Ani DiFranco, Billy Bragg, Martha Wainwright, Get Cape. Wear Cape. Fly, Chumbawumba, Peggy Seeger, with iconic artwork by Jamie Reid – famed for the Sex Pistols’ ‘God Save the Queen album artwork. [1]
With all profits going to Occupy and related movements globally, which Occupation Records was set up to benefit, ‘Pay what you can afford’ digital downloads are now available from the Occupation Records website (http://www.occupationrecords.com/) plus CDs, vinyls, limited prints of the Jamie Reid artwork and ethical fair wear Folk the Banks T-shirts by THTC. [1] [2] As a special thank you, those donating over £5 for digital downloads will be entered into a draw for an Occupation Records bundle!
Tom Morello said: “The wealthiest CEO’s reward themselves with million dollar bonuses while millions are out of work. What can we do about it? We can protest against it, fight back against it, and sing songs that do both.”
The album will also now available around the world online at stores including Rough Trade, 7digital and HMV, as well as in CD and vinyl in stores across the UK from Wednesday 6 June. Also on the album are Chris T-T, Ryan Harvey, Tao Rodriguez-Seeger, Anais Mitchell, Show of Hands, King Blues, Leon Rosselson, The Young-uns, Oysterband, Jim Moray and Eddie Morton.
Jamie Reid said: “It was an honour to be asked to do this artwork for the Occupy movement. I have been involved with doing ‘protest’ visuals since the early 70’s, and I hoped with this image to incorporate ideas from this source, putting them into a modern context within the birth of a whole new form of protest and resistance, against the increasing corruption and corporate greed of current policies and economics. Learn from the past. Live in the present. Look to the future.”
Adam Jung, Artist and Industry Relations for Occupation Records, said: “Occupy has pushed the demand to address social and economic inequality to the fore by continually developing creative new ways to spread our message. Occupation Records and today’s release of Folk the Banks utilising a pay what you can afford format is offering another alternative.”
Folk the Banks will not be available via Amazon of Apple’s iTunes due to labour and human rights violations. [3]
Full Folk the Banks album track listing
1. Billy Bragg – Which Side Are You On? [Original]
2. Anais Mitchell – 1984
3. Ryan Harvey – See It Through [Original]
4. Show of Hands – Arrogance, Ignorance, and Greed
5. King Blues – We Are Fucking Angry
6. Chris T-T – A-Z (Piano Version) [Exclusive]
7. Get Cape. Wear Cape. Fly. – Gamblers Lament [Original]
8. Ani DiFranco – Coming Up [Exclusive]
9. Peggy Seeger – Doggone, Occupation Is On [Original]
10. Leon Rosselson – Money Matters
11. The Young-uns – Hard Times
12. Martha Wainwright – No Woman, No Cry
13. Oysterband – The Early Days of a Better Nation
14. Chumbawumba – The Old School Tie
15. Jim Moray – The Rufford Park Poachers
16. Eddie Morton – Union Jack
17. Tao Rodriguez-Seeger – Well May The World Go [Original]
18. The Nightwatchman: Tom Morello – World Wide Rebel Songs
Notes
[1] Folk the Banks album available on a Pay What You Can Afford basis at http://www.occupationrecords.com/. Folk the Banks flyer – http://www.occupationrecords.com/shop/flyer_folkthebanks-A4.jpg. Occupation Records on facebook – https://www.facebook.com/occupationrecords / twitter – https://twitter.com/#!/OccuRecords. Folk the Jubilee video with Martha Wainwright’s version of ‘No Woman, No Cry’ at http://www.youtube.com/watch?v=gVKIEZ6XMRk; Video playlist of artists from Folk the Banks album – http://www.youtube.com/playlist?list=PLD318C9F0C49858FA
[2] Occupation Records is a benefit record label raising funds for, and spreading the messages of the Occupy and related movements through the release of benefit albums, alongside merchandise and live events. The label is an attempt to bring the ethos of Occupy into the music industry in a very practical way. It is run under the ethos of Occupy. All the profits from the album are distributed to the global Occupy movement and related and allied movements. Decisions are made by consensus, all members are represented by a union, finances transparent and open, with distribution and manufacture being ethical and transparent. The label has also initiated community engagement projects such as most recently “School of Rockupy” were young people are joined with music artists to write, produce, record and distribute a track in one day getting their message out utilising the processes of Occupy. The next School of Rockupy will be taking place in June 2012 – details of the first edition with Kate Nash can be found at http://schoolofrockupy.wordpress.com/. Members of the collective behind the label are also actively involved in Occupy London.
[3] Occupation Records says no to Apple’s iTunes and Amazon; challenges music industry
http://occupationrecords.com/news/?p=1 / Apple, Foxconn slammed by SACOM on worker abuse in China / http://www.pcadvisor.co.uk/news/mobile-phone/3361345/apple-foxconn-slammed-by-sacom-on-worker-abuse-in-china/Fair