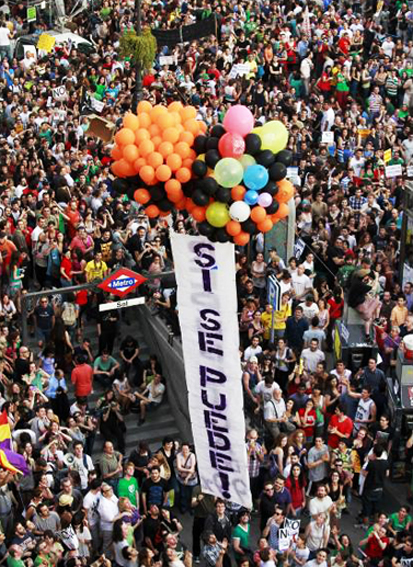 On May 15th of last year we said: “Nobody expected the Spanish Revolution.” It’s been 12 months of debates and actions, of getting to know each other, and testing what we could do together. We see that bipartisanship has not listened to a single one of our demands. How then can we defeat the dictatorship of the market? How can we win a new regime of rights for all? How, in short, can we conquer a real democracy?

A government without a parachute

The first premise that we need to remember is that the current crisis is political and only political. There is no economic argument that justifies austerity policies that ultimately push us into recession. The problem lies only in the accounting hole of the large Spanish and European financial institutions – generously fattened off of several decades of successive financial bubbles united in an economic model based in brick, mega events and infrastructure that we never asked for and that today show an authentic black hole of debt and dispossession – and the incapacity to find a profitable business niche in a situation of the general decline of the market. In this sense, all of the decisions directed by financial rigor, austerity and deficit control are only oriented toward defending the interests of the large creditors – banks and investment funds – that have turned the public debt into big business, the only business now available.

The second premise results from the first: the political decisions that have ended up leading to the debt crisis are made only in a few centers of power. At the European level, the only one that really matters, the centers are the German government of Angela Merkel and the rigidly orthodox European Central Bank. At the Spanish scale, but only as a simple messenger, the last link of a long chain of command that begins with the large financial institutions: the State government and the autonomous communities, which can be more or less in agreement with the ideology of adjustment and debt, but don’t have any plans other than to cut rights and welfare.

We see that our government doesn’t do anything to stop the debt from growing and growing. Latin America lived a lost decade. A decade of poverty is foreseen for Greece. The growing snow ball must be stopped. The more time passes, the poorer we will become, the more unstructured our public services will become, the less room or maneuver we will have. Any government that doesn’t say enough and break the vicious circle of debt is an illegitimate government. A government that sells its citizens to save the banks’ profits is an illegitimate government. In Argentina, after the crisis of 2001, only the government’s fall opened a process that ended the debt. In Iceland, only the expulsion of the politicians allowed for the default and change of economic direction. But, how to overthrow a government? The rhetoric of bipartisan democracy is powerful, although legitimacy does not only depend on votes.

We launch ourselves into anticipating some events of the immediate future: there will continue to be new attacks on the market, the risk premium will go above 600 points, European intervention in the Spanish economy will stop being wrapped up in the rhetoric of “European politics” to be one of direct control of the public accounts to guarantee the debt. At the same time, there will appear, and they are already here, the first talks of reform: they will talk about abandoning, always partially, austerity measures, of recovering the path to economic growth, of partially maintaining the Welfare State. However, we shouldn’t conform, it’s only about rhetoric and partial measures to dole out a process of brutal dispossession. Simply, our political class, both Spanish and European, totally lacks an alternative that doesn’t consist of following the mandates of those that really direct the continent’s economic activity: the large financial institutions.

When they say, “we can’t allow the occupation of the plazas, it will erode confidence in the markets,” they are giving us a clue. What would happen if at some point we remained in the plazas? In Egypt they defeated a dictator and in Iceland a corrupt government. But, what would happen if the risk premium shot up without people in the streets? In Italy they have imposed a president that nobody voted for. When Rajoy’s government falls, maybe they will convoke elections or establish an alliance between the PSOE [Partido Socialista Obrero Español – Spanish Socialist Workers’ Party], the CIU [Convergència i Unió – Convergence and Union (Catalan Party)] and the PNV [Partido Nacionalista Vasco – Basque Nationalist Party] to ensure the debt payment and to balance the power of people taking the streets. But they would only govern to be the privileged witnesses of the rapid erosion of their legitimacy, by making visible the separation between society and the political class, between the real country and the representation of the country.

“Spain is too big to be bailed out,” we’ve heard said a thousand times. What would happen to the German and French banks, the creditors, if they saw that there is no way to pay the debt. If Italy is infected? Even more interesting, what if movements like the 15M take hold in other countries, like Italy? Could they be capable of maintaining the same policies of austerity and cuts in favor of the creditors with Europe socially boiling over and the currency in free fall? Could they continue governing as if nothing were happening? Could they maintain the same policies of social dispossession throughout the continent faced with movements that bring together diverse peoples on a European scale? Could they continue accelerating the looting in the context of blatantly leading economies to ruin?

Because of this, the revolution seems to consist in displacing the current political elites that aren’t going to do anything for the common people. The fundamental question resides in the following equation: how to make the destitution of the political class be paralleled by the constitution of new forms of democracy at different scales from the local to the continental? Here, again, there is no path to follow. Undoubtedly, we will find valuable all experiences of the creation of alternatives, self-management and the direct appropriation of public services, updating forms of use and management of common goods. Also, the assemblies in the plazas or work sites and digital networks provide experiences and tools for the democratization of politics and power. Without these experiments, in fact, there can be no real democracy. It is time for change, for innovation.

In parallel, new electoral candidates will appear – for example, the pirate parties or broad coalitions of small parties – that will attempt to wrest away the ability to exercise political power from within existing institutions, even if only so that those same institutions don’t impede the creation of other new ones. We will have to demand of them, of these new political platforms, that they have clear and consented upon democratization programs, and remind those candidates that their mandates are revocable and should be fully under the control of of new forms of democratic intervention and should assume the ability to generate proposals for citizen assemblies. Ultimately, that they should obey and do it thanks to a new system, a system that is more democratic and more just. There are more than enough examples of of new forms of institutions like those that have crossed Latin American in the last ten years or those that have emerged from the Icelandic revolution. The party system doesn’t work, the near absolute delegation of sovereignty to someone who doesn’t have any responsibility for their voters is dangerous for democracy and welfare.

From the days following May 15, 2011, we have spent a long time thinking about this constituent process: what new forms of direct participation and deliberation to use, how to reform the electoral system, what social rights will need to be legislated, what type of financial controls to impose and what kind of economy we want to promote, and much more. Much, therefore, is already advanced, we only need a way to make it happen by uniting forces.

This is only one of the possible stories. Be it is how it described here or in another way, we will only stop society’s submission to the debt payment if the 99% lose our fear and say enough. We can never really know how to change things, but it can only be accomplished with much desire. For the moment, maybe, it is enough to insist in a method that works and that we know. Repeat ourselves and repeat ourselves. Occupy the plazas and avoid any provocation. For every eviction, a new concentration of thousands, tens of thousands, until the plazas are ours again. And when it is necessary to stay indefinitely in the plazas, with a unanimous scream: “They don’t represent us.” With one goal: A real democracy.