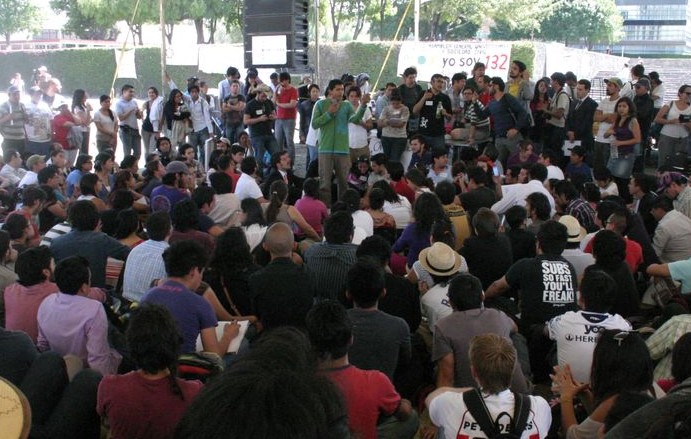 Nearly two weeks have passed since the first massive Yo Soy 132, or I am 132, protest in Mexico on May 23. On that date, thousands of Mexican university students, academics, youth, as well as some who were not-so-youthful, began to mobilize for the democratization of Mexico’s media and against the role that the media is playing in the upcoming presidential elections. And the youth are seriously moving.

Everything started the day students mobilized under the #YoSoy132 Twitter hashtag, which became a global trending topic for more than six days. From that moment on, they have changed political discussions in the country in a way that nobody anticipated. Some months ago, it was considered almost a given that Enrique Peña Nieto, the prefabricated Institutional Revolutionary Party (PRI) candidate pushed by the country’s media duopoly —Televisa and TV Azteca — would win the elections handily. But this student movement that began 40 days before the elections may change a history that appeared already written.

With presidential elections less than a month away, this episode of student revolt against Mexico’s mainstream media and for what they call an “authentic” democracy will be a milestone both before and after the voting on July 1. In record time, they have begun to organize themselves, carving out and building new spaces for participation and political organizing that transcend the electoral status quo.

Proof of this was the celebration of the First “Yo Soy 132” National Inter-University Assembly, held on May 30 in Las Islas, Ciudad Universitaria, in Mexico City. More than 7,000 students from all over the country participated. They divided themselves among 16 work tables and discussed issues such as public spaces within the media, the movement’s political position, information surrounding the elections, transparency in the elections, ways of organizing, ways of publishing, art and culture, education policy, health and science, violence and repression against social movements, post-election plans, the environment, historical memory, and the participation of Mexicans living outside the country.

The creativity of Yo Soy 132 was evident in the marches that they held during the month of May. Now, that creativity glows in their organizing style. The group’s website, created hours before the first major march, is now itself a social network where one can register as a member, chat, read working documents and discuss them. The structure recalls Ning, an online platform that allowed people to create their own social networks for free, but that in April 2010 became pay-only.

Whereas previous student movements organized themselves into federations and confederations, working only through internal assemblies, the Yo Soy 132 students have begun to work along the most horizontal lines possible, using virtual platforms. Each new member that joins the online social network can join a “cell” or group. Some groups correspond to the working tables from the May 30 assembly, while others are distinguished by universities, regions of the country, or even the diaspora, for those Mexicans who want to join the movement but live outside the country. At the time of this writing, there are 165 cells, and that number is growing daily. There are nearly 70,000 users registered on the Yo Soy 132 social network in all.

One example of what is occurring among these cells outside of the country is what has happened in the city of Barcelona, where Mexican students have already begun to organize. First, students at the Universitat Pompeu Fabra (UPF) got Arnulfo Valdivia Machuca, the international PRI campaign coordinator, to cancel his visit to a conference at that university at the last minute, after it was revealed on social networks that he had hidden his party membership and position in order to trick the audience. Later, various Mexican residents of the Catalan capital made a video in which they identified themselves as part of Yo Soy 132.

The cell that has the most members is the group at the National Autonomous University of Mexico (UNAM), with 1,179 members. It is worth noting that the majority of the groups identify themselves as “nonviolent action groups,” and that there is actually a rule within the Yo Soy 132 movement against participation in violent actions.

This organizing style combines the old methods of making decisions through assemblies and consensus with the use of social networks to both broaden and deepen the discussions, thereby enlarging the space for participation. Yo Soy 132 supporters from different states and countries can now make themselves visible to each other, be present and develop collaborative work in a network that thrives on virtual proposals where physical presence is not necessary.

The Yo Soy 132 movement opted to define itself as independent of any political party, and it openly declared itself against any media attempt to promote a candidate, in particular from Televisa and TV Azteca. Organizers also declared themselves against media manipulation aimed at restoring the “old anti-democratic system” represented by Enrique Peña Nieto. That proposal was greeted by a roar: “Atenco will not be forgotten!” and “We are neither hateful nor intolerant, but we are fed up [with Peña Nieto]!”

Proposals were also reviewed on how to avoid electoral fraud and how best to document possible irregularities during the elections. The students proposed creating a Yo Soy 132 commission that would register itself as an election observer on Election Day and create their own system for counting votes. They also demand that the next presidential debates — set for June 10 — be shown on the national channel, following a format proposed by universities and moderated by academics.

Yo Soy 132 members insisted on maintaining an organized movement, in order to be able to respond quickly to eventual electoral fraud, and they proposed inviting the presidential candidates, if elected, to commit to carry out an enforceable recall consultation halfway through their six-year term.

Far from trying to affect the youth vote, the members of Yo Soy 132 do not support any one candidate and defends the freedom for individuals to decide. They also believe in the right to a well-informed and well-reasoned vote.

As for their plans after the July 1 elections, they claim to represent national demands that go beyond the electoral context and are positioning themselves to be a force to be reckoned with for the coming president. Among their demands, they are considering calling for the unconditional and immediate freedom of all political prisoners in the country, an increase in the minimum wage and a reform in the political process, which would include the recall consultation process, referendums and plebiscites. They have also discussed the creation of a citizens’ youth parliament, which would take actions against corrupt authorities and work to fulfill of the San Andrés Accords. The movement has repeatedly stated its opposition to neoliberal policies.

With regards to security issues, people in Yo Soy 132 demand an end to the current strategy being pursued in the war against organized crime, the return of the armed forces to their barracks, no more military amnesty and the creation of popular forums to discuss solutions to the problem of drug trafficking. They also demand that the current president, Felipe Calderón, be tried for his war on drugs and organized crime that has left more than 50,000 dead and for the cases of femicide in Ciudad Juarez and the state of Mexico.

On June 5, representatives and spokesmen from the different universities and the cells that exist within the movement met at 4 p.m. in the Faculty of Architecture at UNAM and tried to reach a consensus for more than eight hours on the proposals that came out of the 16 work tables of the first assembly.

The press and the media were not granted access to the meeting so that they would “not feel pressured and not distort information.”

In parallel, and for the first time, faculty from different universities around the country held an Assembly of Academics at UNAM. Teachers, academics and intellectuals who for many years weren’t organized decided to come together and endorse the demands of Yo Soy 132.

Going beyond the springtime bloom

In Mexico, what has transpired over the last month has already begun to be called the “132 Spring,” alluding to the Arab Spring. Regardless of whether the spring arrives or not, something is blooming. Today’s students are showing that they are not depoliticized and are capable of organizing themselves in ways far more creative and innovative than earlier Mexican social movements. They have created doubt around the victory of a candidate who was already considered the winner and they have used social networks as a space to provide alternative information in response to the traditional discourse used by the powerful media elite.

Octavio Solís, an historian at UNAM, commented that “the electorate has stopped being a purely political question; it is now a social question.” At the same time, he recognized that “if Enrique Peña Nieto wins these elections, it will be a huge blow to morale. Because of that, it is so important that Yo Soy 132 has begun to draw up post-election plans so that the demands will continue if he wins or loses.”

There are two important challenges that Yo Soy 132 must overcome for the Mexican Spring to truly bloom: expand the political demands that began with the first assembly on May 30, and create an organizational body that goes beyond the spontaneous outcomes of the assembly. Moving towards this goal, they should also take advantage of the months that lie between the presidential elections and the December inauguration.

In the meantime, in Madrid’s Puerta del Sol, the epicenter of a social mobilization that spread to the rest of Spain and hundreds of cities around the world, the Spanish Indignados announced their endorsement for the Yo Soy 132: “We send our solidarity and support to the movement that is expressing itself in Mexico, for the dreams that we share and the future we deserve.” It appears that the feeling of indignation is global.