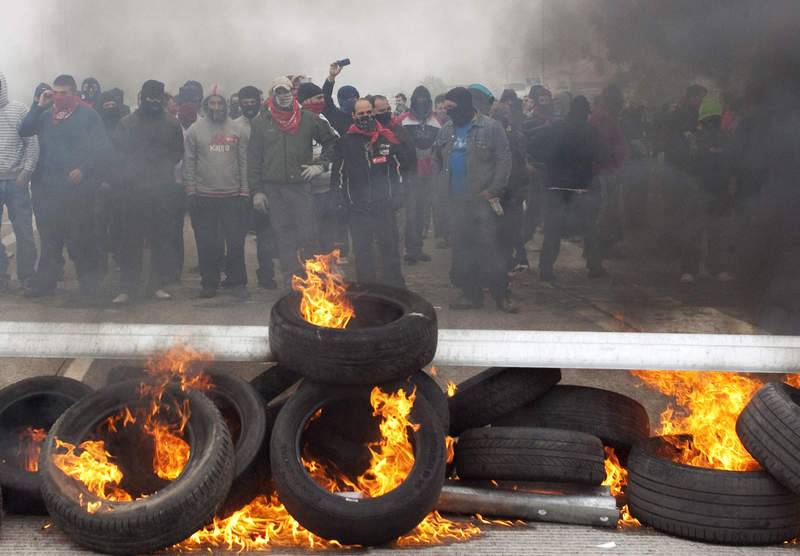 The REALITY almost in the Nalon Valley is far away to ressemble the Eden Garden that the workers organizations try to sell us on the 90´s:

The miner´s found are touching the bottom..
The retraining… we don´t have it an we are not gonna see it
At least TODAY working for HUNOSA ( one of the biggest miner´s company) is the best option for many young people of the coal mining area.

But it´s ok!! we are at least the ones who drink more Cider and that´s what we export from the Cuenca ( as we call here the coal mining areas)

quote-explanation of this last sentence: ( this was A joke cause in Asturias the cider and the apples.. are a main part of OUR CULTURE ).

The disaster is served the Companys created to generate the employments that we lost with the closure of Hunosa are closing before the coal mines themselves….

It´s time to point them as NECESSARY COLLABORATORS.. in the SOCIAL RUIN of the Coal mining area.

Politics that only benficiate AN USURER MANAGEMENT CLASS that close their stalls or kiosk when they LOSE PUBLIC HELPS.

That WE ARE NOT MERCHANDISE IN THE HANDS OF POLITICALS AND BANKERS!

WE ARE NOT MERCHANDISE!!

… (A Madreña is a typical Asturian shoe made with wood..)

With that on mind you have to know that we are one the the poorest regions of Spain… and that the European Miners Founds are vital for many things in our region…. so the struggle to defend them is neccesary… but with the corruption of the sindicates in mind all the time..

This days they are cutting Highways… for those who don´t know asturias.. we have just one main highway that connect us to the rest of spain… so if they cut in campomanes we are isolated… the other way is a mountain pass road..

The miners are changing tactics.. the first days they use the cut of the highways… and with the first riots.. the response of the other days was to go to the forest near by and make a “little resistance” they also use another tactic… “little cuts” in many roads…. some of them are “squatting” the col mines… without going out…

And one of the main villages Mieres was a kind of “police state” with many identifications by secret police… all the day..

The fact is being without the european miner founds.. is a kind of suicide for a region of about 1 millon habitants most of them old people and whose well prepared… young people have to go outside to work… for the Absurd politics of our regional goverment…. the result for them is that we where in a kind.. of without “formal goverment” since last year and this 2012 the 45% of the people didn´t vote…..

For our collective here.. the peacefull way to fight against the system is clear that is the path to follow… but we know that “ their defense of their right to work and that vital money is necessary too)