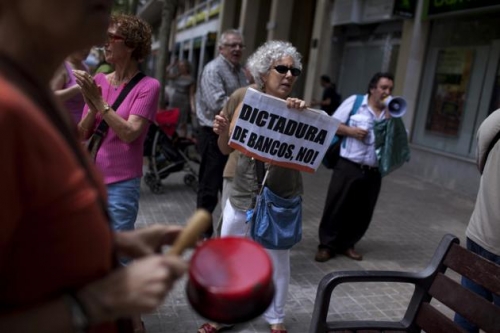 Now that Spain has become the fourth country to receive an EU bailout, the question arises why its corrupt bankers are getting away unscathed.

by Jerom Roos from Roarmag.org

With eurozone finance ministers agreeing late Saturday night to bail out Spain’s failing banks to the tune of 100 billion euros, the root of Europe’s protracted three-year debt crisis is finally revealed for what it always already was: a dramatically over-leveraged financial system that speculated wildly on real estate (in the case of Ireland and Spain) and government bonds (in the case of Greece and Portugal) without any consideration for the possible consequences.

As we have argued repeatedly over the past year, the euro crisis was never about excessive public expenditure; this was a banking crisis from the very start. That reality is now forcefully being driven home to Europe’s suffering population as 100 billion euros in taxpayer money are being put on the line to “rescue” Spain’s failing banking sector. And while the Spanish people suffer the brunt of two years of disastrous austerity measures, the bankers who put them in this mess are still running away with multi-million dollar bonuses.

With 400.000 families having lost their homes since the crisis began and with one in four Spaniards (and over one in two young people) now out of work, there is no doubt the average population is suffering immensely. Earlier this year, Caritas found that 22 percent of Spanish households now live below the poverty line, while another 30 percent are on the brink. As labor rights are being abolished, social safety nets dismantled and public services slashed across the board, a shocking 11 million people suddenly find themselves at risk of falling into poverty. Make no mistake: these are Depression-era figures.

Meanwhile, evidence has begun to emerge of a parallel society inside of Spain where the laws of physics apparently do not apply. Last month, the government moved in to nationalize Bankia — itself a conglomerate of failed regional savings banks (known as cajas) — at the cost of 4.5 billion euros, and then suddenly found that it required another 19 billion euros to continue operating. While this is more than double the total budget cuts in education and healthcare, none of this stopped Bankia from paying its executive, Matías Amat, 6.2 million euros to go on early retirement, while Bancaja, one of Bankia’s seven constituent cajas, apparently still owes its executive Aurelio Izquierdo a lousy 14 million euros.

This private extravagance obviously did not occur in isolation from Spain’s corrupt political class. In one particularly notorious example, the Caja de Ahorros del Mediterraneo (CAM), lent 200 million euros to the cash-strapped government of Valencia just two days before its collapse. Interestingly, the Valencia government is controlled by the Partido Popular of Prime Minister Rajoy, which also controlled most of the board appointments at CAM. It is no surprise, then, that attempts to investigate Bankia and the other cajas “have been blocked by the People’s party in the national parliament and the Madrid regional assembly.” The government and the banks are one and the same.

Yet despite this blatant corruption, cronyism and political collusion, Europe is adamant to save Spain’s banks from drowning. With Greek elections coming up in a week, EU leaders fear that the election of the Coalition of the Radical Left (SYRIZA), which rejects the terms of the EU-IMF-ECB bailout, could lead to market panic that would rapidly spread to Spain. Since Spain as a whole is both too big to fail and too big to bail out, EU leaders are hoping to contain the crisis through a partial rescue (a “bailout lite”) that focuses narrowly on Spain’s failing banking sector without requiring any reforms from the Spanish government.

While this sounds good in theory — the EU won’t force further austerity upon Spain — it is an aberration in truth. Once again, the bankers are getting away with murder. “This is good news for our banking system,” one financial expert was quoted as saying in the New York Times, “as is the fact that the euro group is not imposing such strict conditions.” Spanish Finance Minister De Guindos promised that “conditions will be applied to the banks, not Spanish society,” but he thereby blatantly ignores the fact that (a) today’s eurogroup statement does not spell out any tangible conditions for the banks; and (b) Spanish society will suffer conditions, albeit in an indirect way.

Let’s take a look at (a) first. What conditions will be applied on the Spanish banking sector for it to receive this bailout? Some commentators are rightly pointing out that the EU will want to make sure to stamp out some of the sector’s rampant corruption and cronyism, but what can it really do? As the Financial Times importantly reminds us, ”the guidelines [of the bailout fund] merely talk about abiding by EU laws governing state aid for financial institutions and giving regulators more authority over how to wind up failing banks.” No mention of socializing and democratizing banks, limiting executive pay, persecuting corrupt CEOs, or severing the sector’s stranglehold of democratic processes.

As for (b), there certainly will be conditions for Spanish society, but rather than being imposed directly by the EU they will be imposed indirectly by financial markets. Consider this: because the EU bailout fund cannot directly transfer money to private banks, the 100 billion euro bailout will be wired through Spain’s bank restructuring fund. As such, it will add another 10 percent to the country’s sovereign debt/GDP ratio, which in turn will further worsen the debt sustainability of the country’s shrinking economy. Last week, Fitch already downgraded Spain’s credit rating by three notches. While the bailout itself provides a loan at below-market interest rates, the accrued debt will only make it more expensive for Spain to borrow on international markets in the future.

This, in turn, will require even deeper austerity to stick to the eurozone’s self-chastising budget targets, while not solving any of the underlying problems. More and more private losses are being transferred to the public sector (i.e., the average population), but the toxic assets (i.e., the bad mortgages) are still on the books. Without finding a way to bail out the Spanish population from the bottom up (i.e., bailing out homeowners as opposed to mortgage lenders), many millions more will default on their loans and it will just be a matter of time before the giant Ponzi scheme unravels. As the influential financial blog Zero Hedge pointed out earlier, Spain is about to enter a full-scale collapse:

Until recently, the caja system was virtually unregulated … Until about 2010-2011 there were no loan regulations for these banks (Which account for 50% of all Spanish deposits). They didn’t have to reveal their loan to value ratios, the quality of collateral they took for making loans… or anything for that matter. So, with Spain today, we have a totally unregulated banking system sitting atop half of all Spanish mortgages after a housing bubble that makes what happened in the US look like a small bump.

While Spain heads straight for the abyss, dragging down the rest of the eurozone with it, the 99 percent is once again being forced to pay for the extravagance of the 1 percent — and the total collapse of its system. Following the announcement of the rescate tonight, the Puerta del Sol in Madrid and the Plaça de Catalunya in Barcelona once again filled up with thousands of indignados banging their pots and pans in outrage. “We won’t pay for their crisis,” people chanted, and “it’s not a bailout, it’s a fraud!”. Once again, they are right. But it remains to be seen whether anyone will listen…