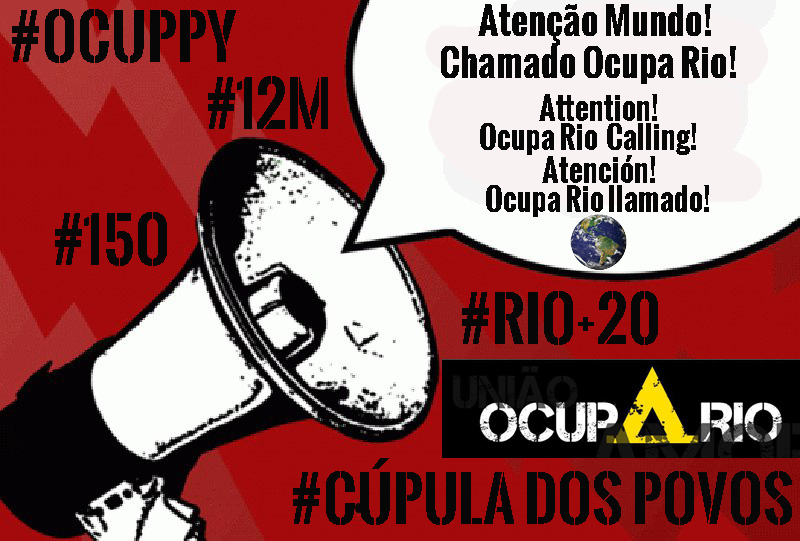 The Occupy movement is beautiful and incredibly surprising. In the last few days was able to connect with our occupiers here in Cidade Maravilhosa (´´Wonderful City“), Rio de Janeiro. The city is hosting the United Nations Rio+20 conferences on Sustainable Development and Environment, dubbed so after the first famous gathering in 1992. The current event is unprecedented in its magnitude, with participants from all over the world and a series of events happening across the city. The whole hotel system is overbooked to the point official organizers had to build a tent camp – this one legal and sanctioned, of course – to host all the attendants that were unable to find a room.

There are three main axis of discourse happening. One official, another unofficial but sanctioned, and the last illegal. The first is the Rio+20 UN conferences (un)conveniently located on the outskirts of the city; security is tight and done mostly by the military. The second is the People’s Summit located downtown at Aterro do Flamengo, where voices in general opposition to #greencapitalism have their space: miles of (big) tents with generators cover the landscape, and one can find stages, food courts and cash machines. Social movements from all over the world are exchanging there daily in a melting pot of ideas.

These voices claim to challenge the status quo by exposing its idiosyncrasies; these encounters are indeed way more politicized than the ones happening in Rio Centro (official UN Rio+20), which are marked by a nauseating smell of real politik.

At the People´s Summit, one can see all colors, traditions, languages and heritages, making their voice a bit more heard. There is one caveat though: the People´s Summit is sponsored by the state, NGOs and corporations. One cannot avoid noticing.

And lastly, there is the Rio+99 OccuSummit, happening at Praca do Cavalo, Aterro do Flamengo. Occupiers here come from many different states in Brazil and some come from abroad. Demographics? Mostly young people, but presence of other age strata is noticeable. Politically speaking, the camp seems to lean towards anarchism but moderates and reformists are also sharing grounds. Middle class and poor people are sharing the space in a total of about hundred people. Some interesting stories were heard. For instance, one of the occupiers started an Occupy Favela in the favela he lived, was greeted by the drug lords of the ´´morro“ with an assault rifle, and after explaining that it was a peaceful protest against the oppressive police state and the ongoing war on the poor in Brazil, he was granted to stay and occupy. Pretty AMAZING feat.

Also, looking through an Occupy Anthropology lens, there is a curiosity noted: the hand signals are a bit different, even within Brazilian Ocupas. Decentralization and locality at their best.

The Rio+99 OccuSummit has been camping for 5 days now despite a decree that was passed by the state banning non sanctioned public encampments during Rio +20. The ´´approved“ camps though – where many indigenous, campesinos, and other voices in struggle are camped – are suffering with crowded facilities and a couple days ago rotten food was given to indigenous people. Green capitalism treats voices in struggle pretty well apparently…

What one has to ask now is how each of those three axis of discourse position themselves regarding the critical issues of our times. Stay tuned for more information and actions. More can be found @occupyrio and http://www.ocupario.org