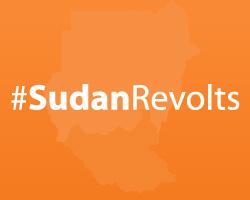 As Sudan approached its first week of continuous protests triggered by recently announced economic austerity measures, a country-wide call for protest was made for Friday (June 22) after prayers. The protest was called “Sandstorm Friday” and it asked citizens to move out of mosques into main streets and bridges.

The Sudanese public answered the call and a long day of mass protests all across Khartoum and other states such as Shendi, El-Obeid and Port Sudan took place.

Some protests happened after the Friday prayers, others only started picking up in the late afternoon; and others such as the Jabra protest only started at night. The first reports of protests came from Al-Kalakla in Khartoum and Wad-Nobawi in Omdurman. Then the situation escalated and the protests moved to Al-Daim, Khartoum Three and Sahafa, all neighborhoods in Khartoum. In Bahri, protests and arrests were observed by Girifna members on Maoona street and Bahri Al-Amlak. In Omdurman, the protests spread to Al-Abasiya and Ab-Rouf according to eye-witnesses.

This protest was organized in Wad-Nobawi and came out of the Ansar mosque.

On the other hand, the protests in Al-Daim and Khartoum Three became very intense and protestors burned a police truck in Al-Daim. Protests in Al-Daim were always exceptionally strong as it is the neighborhood of the late Dr. Ali Fadul, who was arrested and tortured to death by the security agents in the government’s first year in power.

Additionally, during Al-Daim protests, one Girifna member was injured on his foot as he was escaping heavy tear-gas.

Another eye-witness reported that the tear-gas used later in Al-Daim was different, it had an immediate effect and some protestors fainted because of it.

In Burri, police blocked side streets to prevent protests from spreading as Burri was the site of mass protests against the rapid increase of prices late last year.

Another Girifna member, Mohamed Ezzeldeen was arrested earlier today and released after mid-night. He was arrested along with Amira and Amani Osman and Amro Najeela. Ezzeldeen reported that Najeela was beaten. They were released in the early hours of Saturday.

Moreover, Girifna is particularly concerned about Osamah Mohamad, who was arrested on Friday while protesting in Burri, and has not been released yet. We fear for his safety particularly since he appeared on Al Jazeera English, the day before his arrest, explaining why he will participate in the protests planned for June 30, 2012.

Protests continued on Street 60 after midnight. Girifna observed security agents on the streets and heavy police presence. Just after 1 a.m., a protest broke out in front of Jaresh hospital, protestors were shouting “Freedom, Freedom, Freedom”.

1 thought on “The Events of Sandstorm Friday #SudanRevolts”