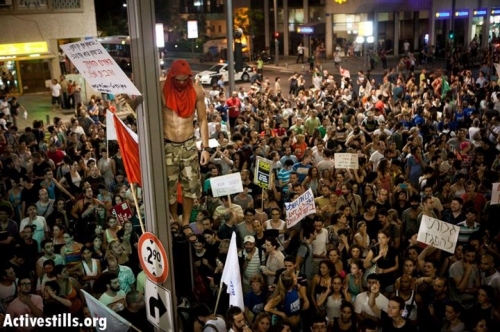 Days after an attempt to re-occupy Rothschild Blvd was violently thwarted by police, Israel’s J14 activists are back in the streets in radicalized form.

Interesting developments in Israel, where the J14 social justice movement (wiki) that burst onto the scenes last year with tent occupations and the country’s largest street protests ever now appears to be making a radical comeback. Last Friday, police thwarted an attempt to re-occupy Rothschold Boulevard in downtown Tel Aviv — the spiritual home to last year’s protests — arresting the movement’s icon, Daphni Leef, who was the first to pitch her tent there last year.

In response to the excessive use of force by police, activists immediately poured back into the streets. This weekend, over 4.000 protesters marched through Tel Aviv, occupying highways, smashing banks, besieging the municipality and clashing with police for over four hours (read a full report here). Writing for the excellent +972 Magazine, which commits itself to “independent reporting and commentary from Israel and Palestine”, Noam Sheizaf observes that:

There is no denying that something has changed in the J14 movement. Last year’s consensus-building atmosphere was gone, replaced by a surprising level of bitterness and anger. Many protesters spoke of the need to take the political battle to the streets, now that even the government’s mild promises from last year weren’t fulfilled, and especially due to the lack of Knesset opposition …

Another interesting development is the change in the way the media treats the protest. Last year, proxies to the prime minister spoke of “media conspiracy” against him, due to what seemed like the mainstream media’s favorable treatment of J14. Things couldn’t be more different today. J14 was blamed for the economic slowdown Israel is experiencing, which sent the media market into a deep crisis. As a result – and perhaps, out of growing dislike of the protesters themselves – the media tone has changed to one that ranges between ignoring the protest and bashing it.

J14 is now the protest of the outsiders. With no backing from the media or major political parties, it is no longer the summer festival people claimed it was in the past. Some questions – like the debate on the need to discuss the other urgent political issues, and most notably the occupation – still haunt the movement. Yet there is renewed energy in the streets, at least in Tel Aviv.