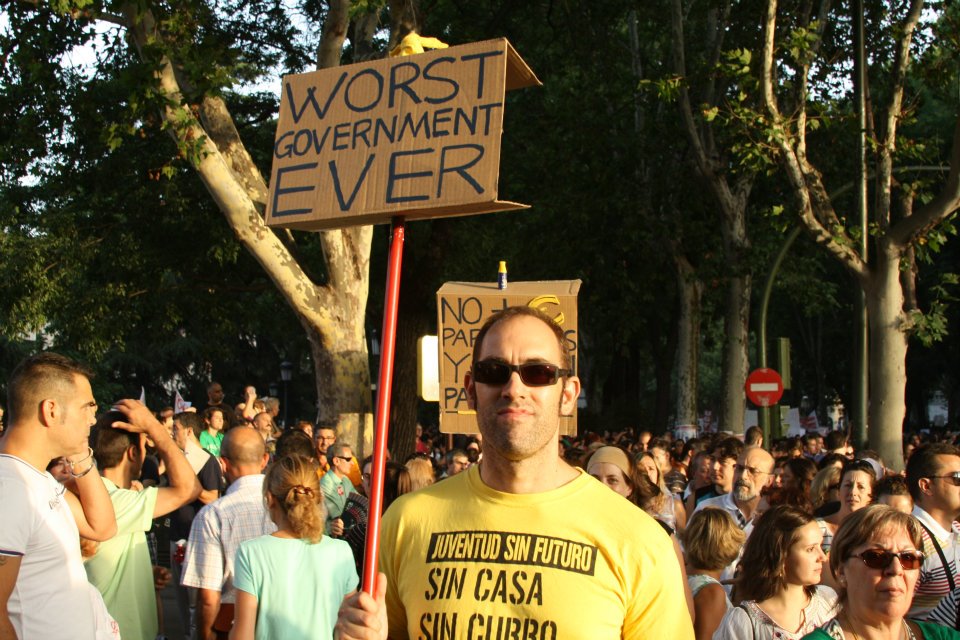 Struggles converge as miners, firefighters, judges, public employees, the unemployed and even the army step up their resistance against EU-enforced cuts.

On Thursday, millions of Spaniards took to the streets in over 80 cities around the country in the largest protest since the past 15th of October, just hours after the Rajoy government ratified the largest budget cuts in the history of Spanish democracy. Once again, in times of crisis, the system shows it true face: as Congress and the streets around it were barricaded by militarized police forces, the ruling party (PP) enforced its absolute majority by carrying out the vote alone, while other parties left Parliament in protest.

Prime Minister Mariano Rajoy arrived five hours after the debate had begun, just in time for the crucial vote. He has yet to appear in Congress to explain the actions his Government is carrying out, which include, apart from the mentioned austerity measures, an inexplicable deluge of lies and deliberate misinformation: as Spaniards learnt this week through the international media, their sovereignty (that is, the amount and conditions of a full bailout of the financial sector) is being debated not in Spain itself — but in Germany, Holland and Finland.

This new agreement, which Mr. Rajoy has failed to even bring up, implies a loan of up to 100bn euros that will fatten up the public debt even further. The deal, which will lead to even harsher austerity measures in the coming months, was simply left out of the public debate until mainstream media caught onto a document made public by the Dutch government mentioning the agreement and its possible conditions. A full review of this and other documents, some of which were kept confidential, was made public and explained yesterday by El Pais — Spain’s largest newspaper — and led to widespread criticism from different segments of the Spanish population.

#19June: The Climax After a Week on the Streets

These events, cramped into a very tense week, have made the legitimacy of the Rajoy government hit its lowest level so far. In fact, the pressure on the establishment is becoming ever more evident as a wide range of the population is uniting to fight back. In Madrid, a spectacular and diverse protest of hundreds of thousands (200,000 to 800,000, according to some sources) marched under different banners, flags and slogans. The large central workers union’s — UGT and CCOO — were present, as well dozens of other professional organizations, representing firemen, nurses and doctors, public transport workers, teachers from every level of public education, miners, feminist and pro-gay collectives, forest guards, 15-M sympathizers and old and new political groups — each of them with their own demands but with one common goal: “a por ellos”. Furthermore, in a very interesting twist, hundreds of local and national policemen marched as well, as their union decided to protest against falling wages and bonuses. Massive protests also took place in Barcelona, Valencia, the Canary and Balearic Islands, Seville, Alicante as well as in another 80 cities and towns across the country.

The success of Thursday’s demonstration marks the culmination of a week of unrest, with spontaneous protests organized daily via the #alacalle hashtag on Twitter, usually in front of Congress. Police presence in the area was very heavy throughout the week, and for the first time the whole premises were shut off with metallic fences guarded by riot police armed with rubber ball shotguns. The official headquarters of both main parties (PP and PSOE) were also guarded by militarized police as protesters randomly congregated before the buildings. These marches, made up mostly of indignant social workers, walked around eluding police lines chanting, making noise and blocking main roads.

Future Turbulence, Towards a General Strike

There is no doubt that social tension is on the rise throughout Spain. The government will have a very hard time to legislate as even its traditional allies are turning their backs. In a very significant declaration last Tuesday, the  AUME (Unified Association of the Spanish Military) announced that it will support future popular protests, as a response to the reduction of  their retributions and rights. Secretary General Mariano Casado, told the Público newspaper that AUME “might even contemplate calling for specific protests” involving all of its current members if the Ministry of Defense does not step back. This would be the first time in Spanish history for the military to organize a demonstration against a Conservative  government led by the PP.

At  the same time, other powerful groups are also organizing and have already announced strikes. Judges, prosecutors and other civil servants have denounced the government in a press release for “trying to dismantle the judiciary power (the General Council of the Judiciary),” as well as “attacking the independence of judges and the impartiality of prosecutors.” The seven independent associations inside the the General Council of the Judiciary have agreed, for the first time in history, on creating a joint commission to coordinate and canalize all forms of retaliation which almost surely include future strikes.

In the following weeks the situation is bound to become critical. Sooner or later Mariano Rajoy must face the inevitable bailout, which has already been passed through the Bundestag. The reaction of the people can only be guessed. It is clear, however, that the situation has reached a turning point, as several different struggles are converging in pursuit of the same goal. The common enemy — the austerity dictatorship of the Conservative government, the neoliberal EU technocracy, and the powerful financial sector — is now very clear-cut.

On Saturday, the 15-M movement is organizing another series of marches that will be arriving in Madrid from around the country. This time the key actors are not the miners, but another key constituency that has been heavily hit by Spain’s social and economic crisis: the unemployed. As activists have emphatically repeated, “if we get every unemployed Spaniard on the streets we would be millions.” The first attempt starts this Saturday, #21J. A general strike is projected for the 25th of September.

With these different social struggles converging and popular resistance exploding into the streets and squares, Spain appears to be up for a wild ride in the weeks and months ahead.