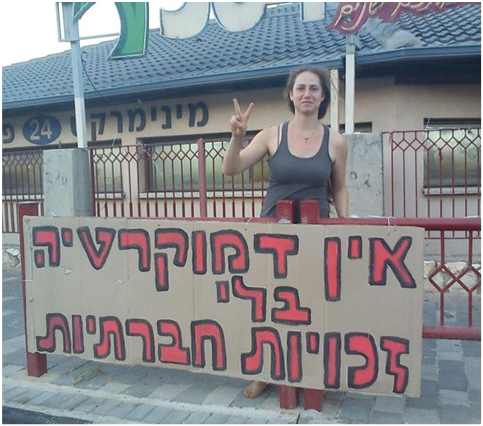 They began to come drop by drop.  Individuals arrive on Thursday.  Throughout Friday came more and more to be summed to several dozen.  It was a rush, “Gold Rush!”

This time the goal was not exploited the natural resources and get rish. This time the direction was different – to fill ourselves only from the welfare provided by nature, and not for filling our wallet. «Morning at the tentyard in the Gold Park in Kiryat Shmona.»

At the last weekends we – dozens of protest activists from the center and the North of Israel – took a step back from the local activity and opened our tents near the Gold River (Nahal HaZahav). «This sign in front of the park speaks for itself» «Two sings at the entrance: “My people are homeless” (a paraphrase of the national public housing company of Israel) | “Our group doesn’t want a revolution, it is THE REVOLUTION” (quote by famous Israeli philosopher Buber)»

Food was provided through collective purchase, shower place was at the Gold water spring down the track, loads of energy. Kiryat Shmona activists organized a variety of activities: general assemblies, work for creating a public garden, peoples parliament, a Saturday evening ceremony (Kabalat Shabat) and dinner, learning of “nineth of AV” (a day of mourning for the destruction of the temple due to mutual hate), music and singing session which lasted until the morning, and on top of it all was a demonstration in the Hazbani river. «Hanging signs at Friday. Yael and the sign: “No democracy without social rights”.»

We are talking about a group of “those people” that the protest runs in their bloodstream and do not have any intention to surrender or to give up to desperation.

These weekends in different places across this country are the product of very hectic work of constructing a outline that aims to include as many activits from as many places as possible, with an overall vision. The guideline was planned for the long-term, assuming that a viable protest, needs to be nationwide protest and not centralized. The final conclution is that we need to focus the activity and the activists each time in a different place to give a “push” to the local protest groups.

Then, for the first time it (for me It’s like a dream) came true.  The combination of small persistent local group of activists, location in an area filled with nature, a time of relief from studies and work, and advanced planning produced the opportunity to express solidarity.

Have you ever heard about 70 men and women arriving to the sleepy Kiryat Shmona to stay for the weekend? The protest creates new subject that can be defined as “Protest  tourism ” but I doubt if you will find anything about it at the local and not to mention national newspapers. For me, the highlight of the weekend was the demonstration against the phenomenon of putting fences at the points of entrance to the region’s streams by the entrepreneurs and the Kibbutzs (former community settlements) which is a growing phenomenon. A few dozen of us created a human chain blocking the passage of Canoes and Kayaks in the Hatsbani stream, using the sporadic support of kayaks that were willing to stop. This action was thought of a long time ago by activists in Kiryat Shmona, and had missed the last “push” to be implemented.  Now, thanks to the outlines and the engagement of the activist from all around it happened.  This is precisely what the outline is all about. «Stoping the Kayak movement at the Hatsbani stream»

If you were not there in Kiryat Shmona’s gold rush, I thought you should know that.