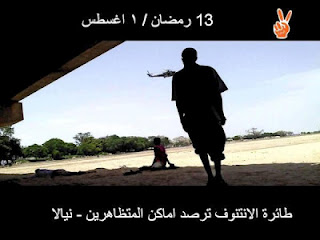 For three days now Sudanese protesters have been killed and traced by helicopters mercilessly in the city of Nyala , Darfur and yet the world is acting as if there is nothing at all.
Since Monday Sudanese citizens have been protesting in the city of Nyala, the capital of South Darfur against the rise in the prices of fuel and food as part of the austerity measures the Sudanese government announced from two months ago. Already you will be amazed to know that those who started and led the protests since Monday were the students of secondary and primary stages in the city “about 200 students”. Later people in residence areas joined the young protesters.

The protests of Nyala have been so far the largest as well the most violent when it comes to the Sudanese regime reaction as 12 protesters have been reportedly killed by the NISS forces.
Yes 12 protesters have been killed mostly from students where as tens were injured and protesters try to hide from military planes. The victims were shot in the head and chest according to eye witnesses which means snipers as we have learned through the hard way in Egypt.

Live ammunition was used aside from the usual batons and teargases. The Sudanese military police was reportedly seen in the protest helping the security forces to disperse the protests. According to eye witnesses Antonov helicopters were used to locate protesters !!

The families of the dead and injured were denied access to the hospital where the victims were transferred to by the orders of the police and the NISS. You can read more about what happened exactly in Nyala. 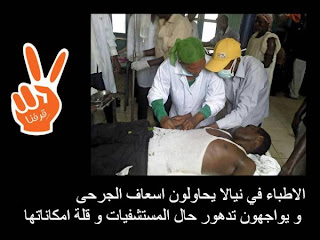 You can follow the updates regarding the protests of Nyala here on twitter through this hashtag #Nyala. The protests have not stopped so far in the city and Omdurman protesters as far as I understand is angry
Here are video clips from the protests