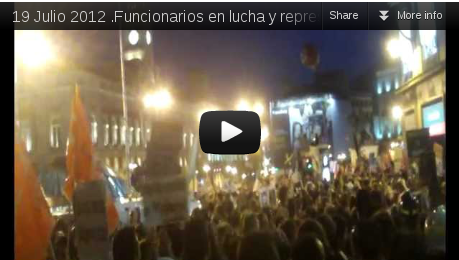 The 19th of July, there was a call to demonstrate all over Spain, done by the public servants (teachers, firemen, health care, police, etc.) More than 80 cities went to the streets to fight against the social cuts, which are taking place every month. Government has lost all peoples trust to be able to overcome the current crisis situation, so massive protests are taking place daily in many cities, but July 19th has been coordinated and the most important one this year. In Madrid over 800 thousand people joined the call. It was the most huge demonstration seen after the ones in 2003 against the war in Iraq. This is just the first signal of what will the autumn be like in Spain.