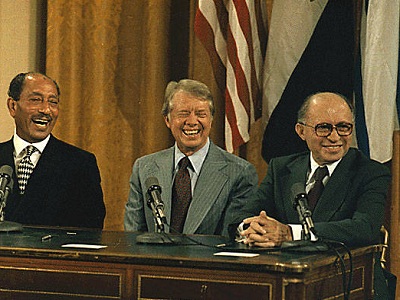 Despite early assurances by Egypt’s new President Mohammed Morsi regarding his “commitment to international treaties and agreements,” one can already foretell a likely confrontation between Egypt and Israel.

A chaotic transition notwithstanding, a new, post-revolution Egypt is emerging. It is is more self-assertive, emphasizing issues of national dignity and respect. In fact, the world ‘Karama’ – dignity in Arabic – is now paramount in the budding discourse.

The key to understanding post-January 2011 Egypt is to appreciate the inferred but real transformation of the collective psyche or Egyptian society, one that is unequivocally challenging the denigrating stereotype of Egyptians as docile and submissive.

This would mean that neither President Morsi, the Muslim Brotherhood, the Salafis, the liberals nor even the generals of the Supreme Council of the Armed Forces (SCAF) could steer Egypt in the sole direction of their own interests. Thus Morsi’s words in Tahrir Square on June 29 were by no means detached from a parallel reality of heightened expectations. In fact, no matter how fervent and ardently clear in his rhetoric, Morsi could barely keep up with what the chanting millions expected of him. He said, “I will endeavor to regain Egypt’s free will in its foreign relations. I will abolish all meanings of subordination to any power whatsoever. Egypt is free in all its actions and discourses.”

True, Morsi did state that Egypt would honor its international commitments, as it most likely will, and insinuated that Camp David is one of these. But the peace treaty with Israel is no ordinary ‘commitment’. It is an exceptional contract signed under immense pressures and sustained through constant bribes that were never ratified by a democratically-elected parliament. It was problematic from the start. The treaty alienated Egypt from its Arab surroundings and denied the country its historical role as a regional leader.

The whole endeavor was draped in secrecy and lack of clarity. For over 30 years, it defined an anomalous relationship between the US and Israel on one hand, and Egypt’s military and politically elites on the other. The Egyptian people were never a relevant component in the treaty, as is still the case. Those who challenged then President Anwar Sadat’s normalization with Israel were severely punished. Still, throughout the years, large segments of Egyptian society challenged Camp David. They were not challenging peace per se, but rather the undemocratic nature and humiliating conditions of the accords.

Sadat then claimed to represent the ‘Egyptian people.’ Of course he didn’t, but the US and Israel have historically perceived Arab nations through individual leaders. The rest simply existed but never mattered. Western countries quickly clamored to capitalize on the opportunity of ousting Egypt from the fight against Israel, generously endowing Sadat with perks, honors and funds. He was handed the Noble Peace Price in 1978, even before the treaty was officially signed in Washington. Sadat then saw himself as representing not only all Egyptians, but also the “great majority of the Arab people,’ claiming that he had responded to the “the hopes of mankind.” From a pro-Israeli Western viewpoint, he was not simply a ‘peacemaker,’ but, in the words of US evangelical preacher Pat Robertson, a ‘prince of peace’.

The mood in Israel was simply that of giddy anticipation. In 1978, Israel invaded parts of Lebanon, and shortly after peace was officiated with Egypt, it invaded the rest of the country, killing and wounding thousands of civilians. The war in Lebanon and the continued subjugation of occupied Palestinians were orchestrated by Likud leader Menachem Begin, previously the wanted head of the Irgun terror gang. But Begin was now a friend, a fellow-recipient of the Nobel Peace Prize, and a gracious host, who spoke profoundly of peace and friendship.

Camp David was never a peace treaty between two nations, but rather a political oddity sustained by billions of US taxpayers’ dollars. For decades, the question of Camp David was never truly settled. Israel accurately understood that to maintain the treaty, Egyptians would have to be forced into submission by a strong ruler, and the US understood that the ruler had to be fed with cash and other perks to remain content. Based on this understanding, Israel remained Mubarak’s most faithful ally until the very end. Just days before Morsi was sworn to power, the Jerusalem Post expressed this sentiment in its editorial: “With the junta maintaining a strong grip on power…relations between Egypt and Israel are more likely to remain stable than in a scenario where both the parliament and the presidential seat are controlled by Islamists.”

Israel is interested in maintaining the status quo with Egypt, which would help it to carry on with its colonial military schemes in Palestine and its aggressive policies in Lebanon and throughout the region. Egypt is unlikely to allow that reality to continue for much longer, particularly once the power struggle within Egypt is settled and a new political discourse is fully articulated.

Unable to truly appreciate the changing face of Egypt, US mainstream media is busying itself with neo-Orientalist discourses pertaining to secularists vs. Islamists and other wholesale generalizations. Such convenient dogmas completely ignore the fact that Egypt’s relationship to the Camp David treaty – and with Israel in general – will not be determined by a false dichotomy setting up bearded religious men against clean-shaven liberals, but by a new revolutionary mood that will continue to grip the country for years.

In Tahrir Square Morsi had proclaimed: “I emphasize the concept of national security in perspectives pertaining to the depths of Africa, the Arab World, the Muslim World and the rest of the world. Will not relinquish our rights; we will not relinquish the right of any Egyptian abroad. Our regime will drive our discourses in our foreign relations.” Egyptians would accept no less anyway, and Morsi’s promises are precisely what Mubarak withheld all these years. Per this roadmap, it is becoming clear that the new Egypt is potentially dangerous. That danger hardly stems from the religious leaning of the president or his political party, but from the very idea that Egypt’s national dignity – Karama – is compelling the country into a change of course in foreign policy.

If Israel doesn’t change its own course to accommodate this new reality, a confrontation will become more inevitable than likely.

(This article was originally published in Arab News)

– Ramzy Baroud (www.ramzybaroud.net) is an internationally-syndicated columnist and the editor of PalestineChronicle.com. His latest book is My Father Was a Freedom Fighter: Gaza’s Untold Story (Pluto Press, London.)