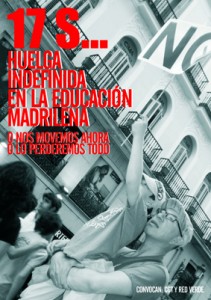 This post has been translated by our followers on Twitter, we want to thank them, for showing once more that cooperating and collaborating are the keys to achieve a global change

CGT union, supported by Red Verde organization, calls everyone out on an Education indefinite strike starting on September 17th. That same day the academic year will begin in the region of Madrid (Spain). Students and other workers are expected to join as well. A rally is also planned at 12:00 pm and another one at 18:30 pm. We are stating
the reasons for which public service workers are right to strike, and the ones you legitimately support them.

– Because only when firm actions are taken against aggressions, a systematical progress of the reforms-set of neoliberal capitalism will be ensured- the one that tends to suppress the few rights and civil liberties workers have preserved. The actions taken so far (protests, one-day strikes) were useless since their opponents had us believe in our weakness, our dispersal, and they prove some fury in their attacks.

-Because austerity measures very much affected teachers and other civil servants: their 14 monthly payments were reduce to 13, so far, and maybe to 12 in the near future.
This corresponds to a 2-months strike, but obviously with opposite results. We have learned that insufficiently firm and early actions produce negative outcomes.

– Because from inside the European ransom plan which is to subjugate the Spanish state,
even more important cost cuts are expected, as for Portugal or Greece : including public workers massive “redundancy” plans, of which a peculiarly painful one for Education Department.
Some of these employees have already been dismissed (interim workers); others are being fired according to agreements set up with UGT and CCOO.
Public Education workers, choice is ours: sacrificing a few days with no pay, or being mercilessly dumped to the street forever?

-Because major unions, such as UGT, CCOO, CSIF, ANPE, STEM, are softly supporting the government’s policy of sinking the country, not to mention public services. Severe poverty and defenselessness are increasing amongst people. Workers have no other choice but free themselves from those in power, because those in power just try to take advantage of their status to benefit themselves. They never make decisions considering workers or even citizens demands. Workers need to fight for their rights on their own, and to build their own social collectives.

-Because Education needs a radical change, and students are the ones who can make it happen. Politicians are using the crisis as an excuse to turn education into a factory of people alienated to a moral order made of mercantilism, hierarchy and inelasticity. Because Education can not be based on materialistic utilitarian principles, religious indoctrinations or political ones. Education purpose is to arouse free human beings.

– Indefinite strike is the most efficient lawful mean that workers have at their disposal, to achieve their proposals and avoid a mass suicide. No company nor public administration could sustain itself without the daily work of their employees. The State will tend to accept any demand from such a critical collective service.

Finally, we call pupils, students and workers to join the indefinite strike, to form strike committes and lines in every single education center, to thoroughly broadcast and inform about the reasons for the strike, to meet and take organisational, strategic and labor-related decisions.
We invite everyone to help us enhance solidarity and generosity towards strike companions.
We also invite to extend these indefinite strikes to other public departments, as an effective lobbying tool.
No government could breathe over a general public blocus for more than 20 days.