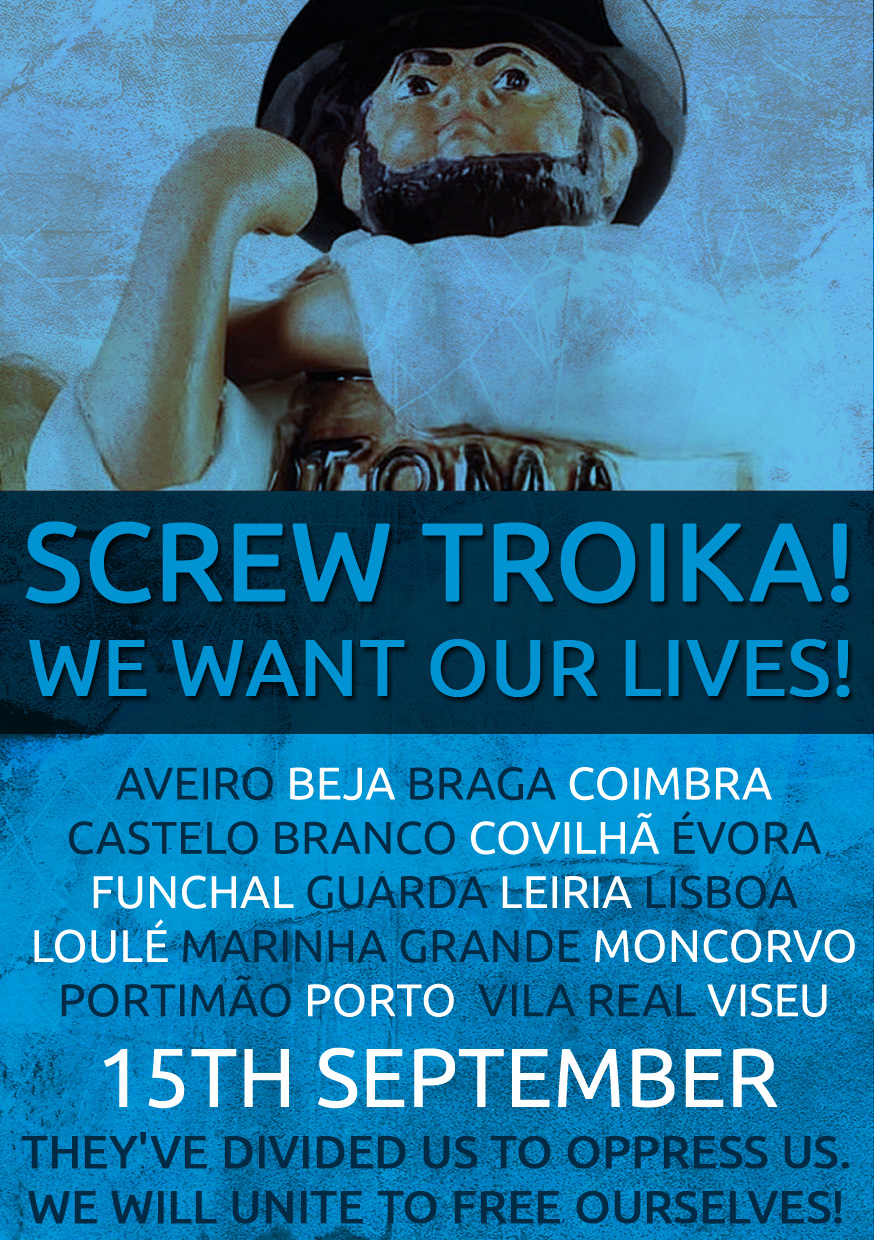 On Saturday 15 September, the people in Portugal took the streets again to protest against the Troika and the austerity measures imposed by the Government. Between 700 thousands and a million, in over 40 cities in Portugal and abroad, they took part in what is probably the biggest protest that has ever happened in the country since the Revolution in 1974. Massive numbers, demanding the immediate suspension of the austerity measures, asking the PM to resign and the Troika to leave the country, under the banner Que se Lixe a Troika! Queremos as Nossas Vidas! (Screw troika! We want our lives!):

After more than one year under the Troika management, people have seen their life conditions drastically worsen and access to basic human rights (such as health, food, education) is now a problem for many. The week right before the protest, the PM has admitted that the economic situation has gotten worst and that new austerity measures were needed. In a confusing televised announcement, he described a series of new cuts to salaries and pensions and a tax raise for wage workers in order to allow a tax cut for the entrepreneurs (an idea that the IMF representatives considered ‘creative’ ). As in Greece, Ireland, Spain and Italy, the not-so-hidden agenda is to reduce salaries, benefits and the welfare state as much as possible, so that foreign companies, especially from the north of Europe, could find economically convenient to outsource in the country.

As a reaction people flooded the streets of Portugal, outraged and in anger, but completely peaceful. The biggest rally was in Lisbon, with over 500 thousand protestors, passing in front of the building which housed the IMF delegation and ending in Praça de Españha, near the residence of the spanish ambassador, a place symbolically chosen to link the struggles in Spain and Portugal. At the end of the rally, the organizers read a text from 15M Economia/Sol and called for another protest on Friday 21 September (the day in which the President is supposed to meet with the Government representatives to discuss the economic situation) to call for the resignation of the PM:

The same night a few thousand activists continued the protest in the square in front of the Parliament.

Some pictures of the day

after, going towards the parliament

1 thought on “Portugal: We Want Our Lives”