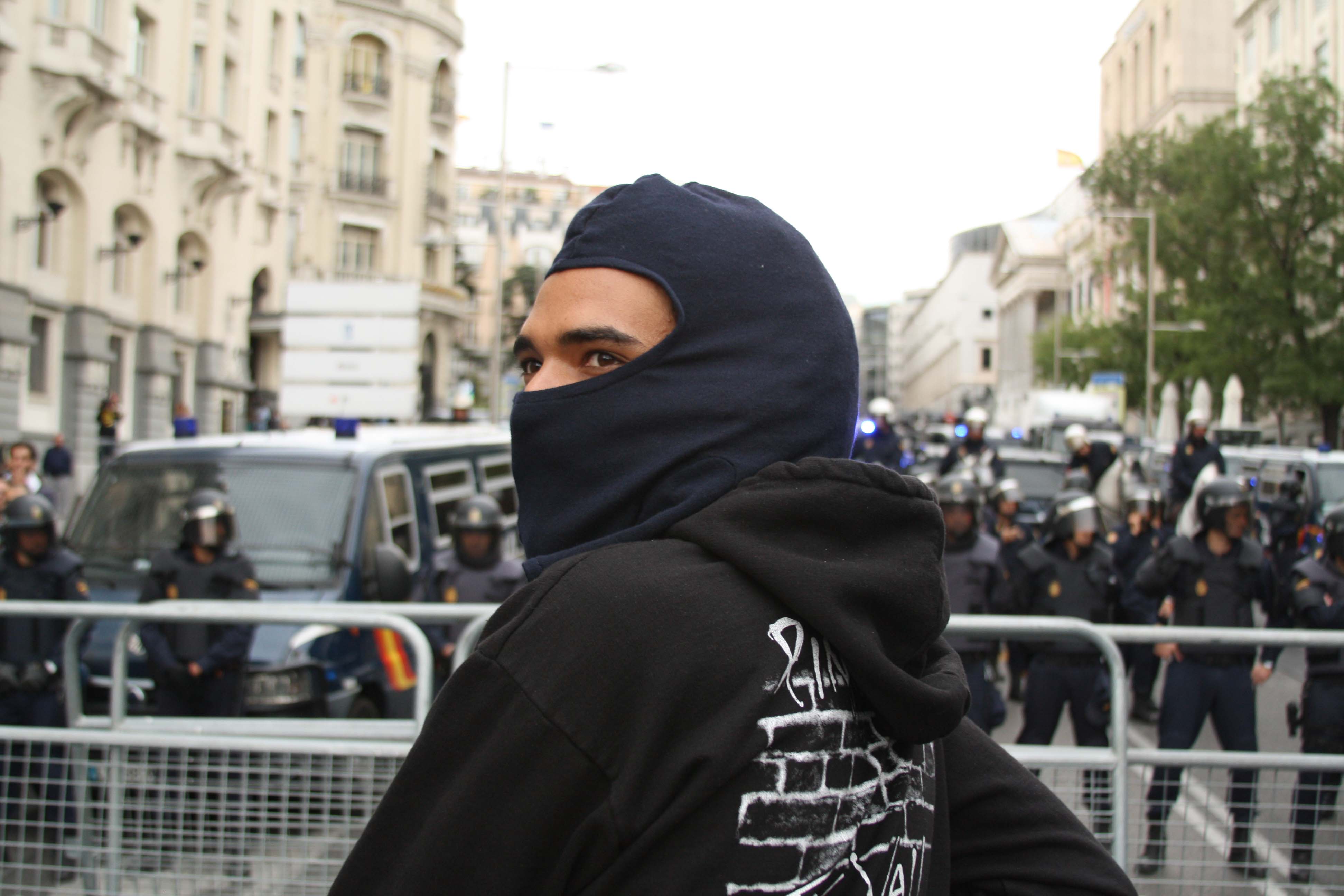 Yesterday’s protest in Madrid was different from all its predecessors since May 15th 2011. Even though it was organized by collectives close to the 15M Indignadxs movement and it’s national network of popular assemblies, most of its signs of identity were not present: the atmosphere was not festive and suitable for all ages, there was no singing or concerts, no flags or t-shirts defending universal health care or public education, and even though an assembly was held before the protest began, there were no proposals or details of the action, only speakers lighting up the mood of the crowd with harsh words. Because of the swelling rage and the noise, as well as the violent police charges in response to rocks and bottles from the crowd, it felt more like Greece than Spain. The majority of signs people carried simply read NO in black capital letters.

The #25S protest marks a clear escalation in both the attitude and methods of the 15M movement and it’s sympathizers. In 2011, from the very beginning people argued that Sol square was not the right place to protest as it was not really making anyone in power too uncomfortable, there was not enough pressure. Why not gather in front of Congress, just a few meters down the road? A year and a half later, after most protests tended to avoid direct confrontation with the 24/7 police force in front of the Parliament building, the first action directly targeting the building was planned. Because of this there yesterday’s action was not approved unanimously and many people went as individuals and not as whole assemblies or groups. In order to coordinate the event a hybrid organization was created: the Coordinadora25S.

The language used by the Coordinadora was as strong as their message. Their claims, however, are reasonable for most Spaniards: in their manifesto they state that the Government has lost all legitimacy, after breaking pretty much every electoral promise they made, they have sold out the interests of the majority of the population, prioritizing banks and markets before human rights such as health care, education and housing. Spanish democracy is now being kept hostage by foreign institutions, popular sovereignty has been kidnapped, they stated, and their demands were clear: on the 25th of September Congress will be surrounded to force the dismissal of the government and the beginning of a transparent and popular process to rewrite the rules of Spanish democracy. The Government has broken the social pact on which the 1978 Constitution is based and a new, truly legitimate one, is desperately needed. The reaction on behalf of the authorities was clear and forceful, as this was no longer a parade which merely had to be escorted: one of the main centers of power, full at the time with the country’s leading politicians, was being directly threatened. Therefore, the organization of the event was repressed harshly from the beginning. Policemen disrupted assemblies weeks before the date and identified the participants, buses bringing people in from different parts of Spain were diverted and searched, with more people being identified. A couple of days before #25S, eight of the organizers were charged for crimes against high organs of the Nation and yesterday the amount of police in Madrid hit a new record: around 1.300 police, including special horseback and riot units were brought in from all around the country. In this same tough line, the 35 people arrested will not simply be accused of resisting arrest or disrupting public order, but for attacks on the Nation. Police violence, following provocations I witnessed first hand, was as excessive as always, and included the use of rubber bullets. After several charges and scuffles 64 people were injured, including 27 policemen and one protester who was severely beaten in the head and was left temporarily paralyzed in the hospital. For the first time protesters could be seen arguing over whether to resist passively (sit down with your hands up in front of the police, seeking to demonstrate state oppression) or to fight back on their feet, pushing against police lines, throwing rocks, bottles or pieces of metal from the fences used by the police. Clearly, the trademark non-violent stance of new Spanish social movements has weakened, even though many protesters tried hard to prevent violence by standing in the middle of the confrontations. As the situation in Spain deteriorates rapidly in the face of austerity, poverty and repression, many are desperate for solutions and are willing to do anything to fight back. The confrontation with authority reached a new level yesterday and the Coordinadora has stated that this is only the beginning. More protests are planned for Saturday. For the chronology of events watch this excellent video.

P.S. These moments of passion, anger and fear are also ripe for heroes. One of the stories that went viral on the web was that of Alberto Casillas, a middle age man in charge of a bar near the heart of the protests. As hundreds of people fled from the charging police into his restaurant he took a step forward, stood in front of the door and told the riot police they could not pass. From the other side of the street protesters were throwing rocks ripped out from the pavement, and everybody (including the police) was so nervous that Alberto feared people in the bar could be seriously injured by a probable stampede. The police threatened him violently but he resisted. Later he told the press he had voted for the right wing government currently in power, but “when a Government hides behind guns they start breeding something which leads nowhere good”.