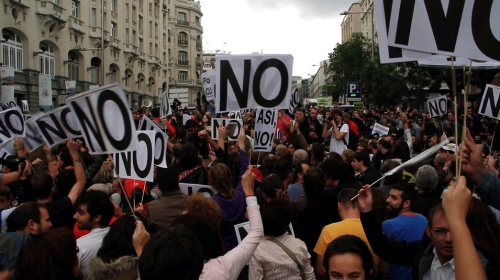 This short film chronicles the events of the past week in Spain, where hundreds of thousands took to the streets against austerity and police brutality.

This short film chronicles the events of the past week in Spain, where hundreds of thousands of people have taken to the streets to demand the resignation of the government and an end to police brutality. Many of the protests ended in clashes with the police. Since the stand off began on September 25th , the images of police brutality have travelled the world over, shocking and inspiring people across Europe and leading to an international day of action on September 29th. This film tells the story of why so many people took to the streets and follows these events as they unfolded.

Madrid On The Brink: S25 → S29 from brandon jourdan on Vimeo.