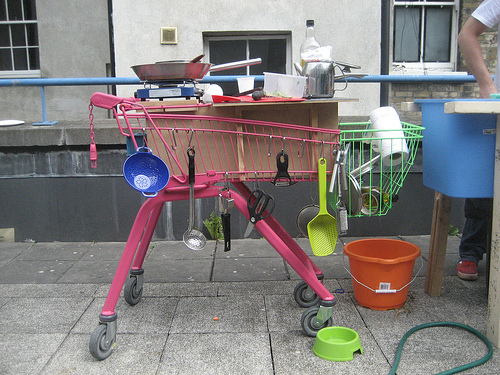 We are in a changing world,; during the last year we’ve seen protests taking place in various locations It has been surprising that many of them had a lot in common,: without talking, without being a strategic decision, many people wanted to change things that affected not only the local, but also the global .
Mobilizations around the world make people aware that in other countries things are not so different,; still, there is a need to spread the word, to understand the different frameworks and contexts, for that is needed to come together and discuss and talk,. What is it like that world that we imagine, how are we going to make it happen, because for the first time we know that we can do it, we have the knowledge and the tools, we need to share, to meet, to decide.
One of the common strategies that have been used during this year is to be where we weren’t expected, to be a surprise, to improvise, to use the collective intelligence, non-violence and inclusiveness as some of the peoples strengths.
We have been camping,or demonstrating, but those cannot be the only tools that we have for gathering,. We can imagine other simple ways to meet and, while enjoying ourselves, we can at the same time share our knowledge, the initiatives taking place, thinking about how to make those decisions that we want to make instead of those that don’t represent us.
So, in this case we think it is interesting to expand the proposal of the COCOOK movement[LINK+DEFINITION]
Among other things, cocooking means taking the street and reclaiming public spaces, abandoned or not, for public purposes. The privatisation of the common spaces is pretty scary, isolation is one of the current social symptoms,; that is, having streets, parks, squares and so on, as step sites instead of meeting places is becoming “normal”, so the need to take back public space is there.
Taking back the streets and squares is part of COCOOK, as well as cooking. Bearing in mind that talking about cooking is not just about feeding, even though it can be a real pleasure :-). Cooking means thinking about the commons, about quality of food and their properties, ecology and ecosystems, organization of consumer groups, health, or sharing knowledge. Recipes have been one of the most traditional examples of sharing, a good way to be inclusive (it is a transgenerational, gender-blind activity) and learn about how others cook, what recipes they use, what tools, what rituals. To build a kitchen means sharing certain skills, knowledge about the tools, the materials, energy optimization. And the best thing about it is that it is ephemeral, you can build it and unbuild it, anywhere, it just depens on the people.
One cannot emphasize enough how gender-blind this activity is; that is, it breaks the pattern of one gender being more active in cooking and others being viewers of a spectacle. The great about it is that it breaks this gender-based pattern by doing, and in an interesting way too!
So a COCOOK event is much more than eating, though now that we are seeing how hunger is present in our “developed” societies it would be an excuse good enough for meeting and sharing, but COCOOK is even more is about learning cooperation by doing it, but with a final prize to be shared by everyone involved or not, the meal!!! And can you imagine a better place to start a revolution than in the kitchen? Of course not 🙂
Perhaps #14N is a good moment to start COCOOKing … take the streets, take your kitchen, ask for ingredients and share&cook