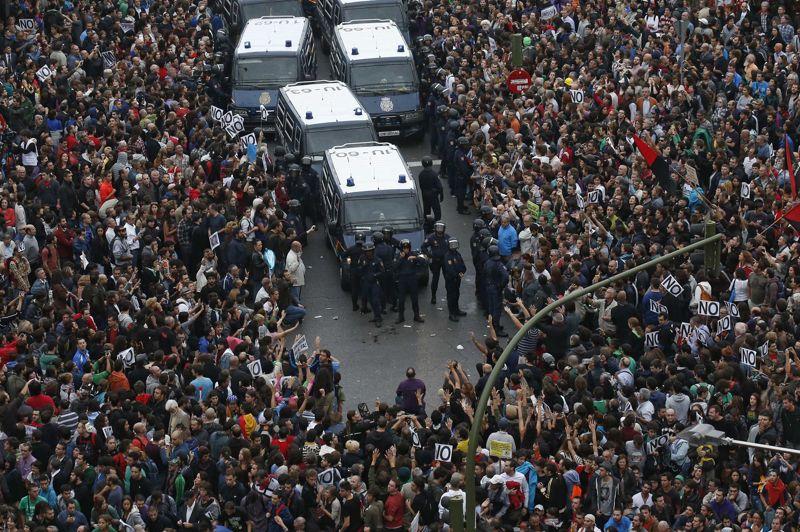 Last year in May, when I took up offices in the tent of the Communication commission of Acampada Sol, I had the amazing feeling of being in the centre of the centre of the world. Like a rock thrown into a pond, I felt how the waves of popular resistance were expanding from this square over the city, the country, the planet.

These last few days, I vaguely felt something similar. Once again, the whole world is watching Madrid.

Tonight at seven o’ clock CET we will march on parliament again to demand the resignation of the government. We will not only be Madrid, we will be thirty cities in Spain, and counting. The last popular assemblies to adhere to #29S have been Pamplona and Lugo. We will also be Lisbon, Porto, and other Portuguese cities. We will be Rome, London, Brussels, Amsterdam, Vancouver.

At the same time, there will be demonstrations for the redistribution of wealth in 40 German cities. And tomorrow will be a day of international solidarity with the Zapatistas in Mexico. Since last May, the country has been shaken by the popular student movement #Soy132, which bears many similarities to the 15M.

When you watch the news, you usually see either the familiar faces who arrive at their important meetings in blinded limo’s escorted by police, or you see rioters throwing rocks. You don’t see the 98.01% of peaceful citizens in between, the people who take the streets every day, somewhere on this planet, to demand a better world for themselves and their children.

Why don’t you see them? Because they don’t have any entertainment value for the major networks.

The news tycoons might not know it yet, but all of this is changing. We, the people, are making news ourselves. The films exposing the agents provocateur in last Tuesday’s protests went around the world. Once everybody already knew about it, the main stream newspapers, not only El Mundo, but all of them, had to bring the news as well, to avoid looking ridiculous.

Yesterday, the chief of police has been decorated for the humiliating way with which his troops were routed by the people on 25S. He received a 10 percent wage increase. The major police union SUP, the same one that offered its full moral support to the cause of the indignados in June last year, heavily criticised the decision. They are angry because the commanders get rewarded, while the officers are risking their lives.

They’re right. Police are on our side. And at every protest, they hear it from one megaphone or another: ‘Citizen police officers! Remember that you are protecting interests that are not yours! Remember that when you are ordered to charge, you are charging your brothers, your sisters, your neighbours, your fathers and your children!’

They know that. And there might come a time that they will refuse to obey.

In the meantime, we are patient. Time is on our side. The only thing politicians can do to appease civil unrest is solve the problem. This means creating the conditions for lasting and gratifying employment, and providing quality social services for all. Exactly the opposite of what’s happening.