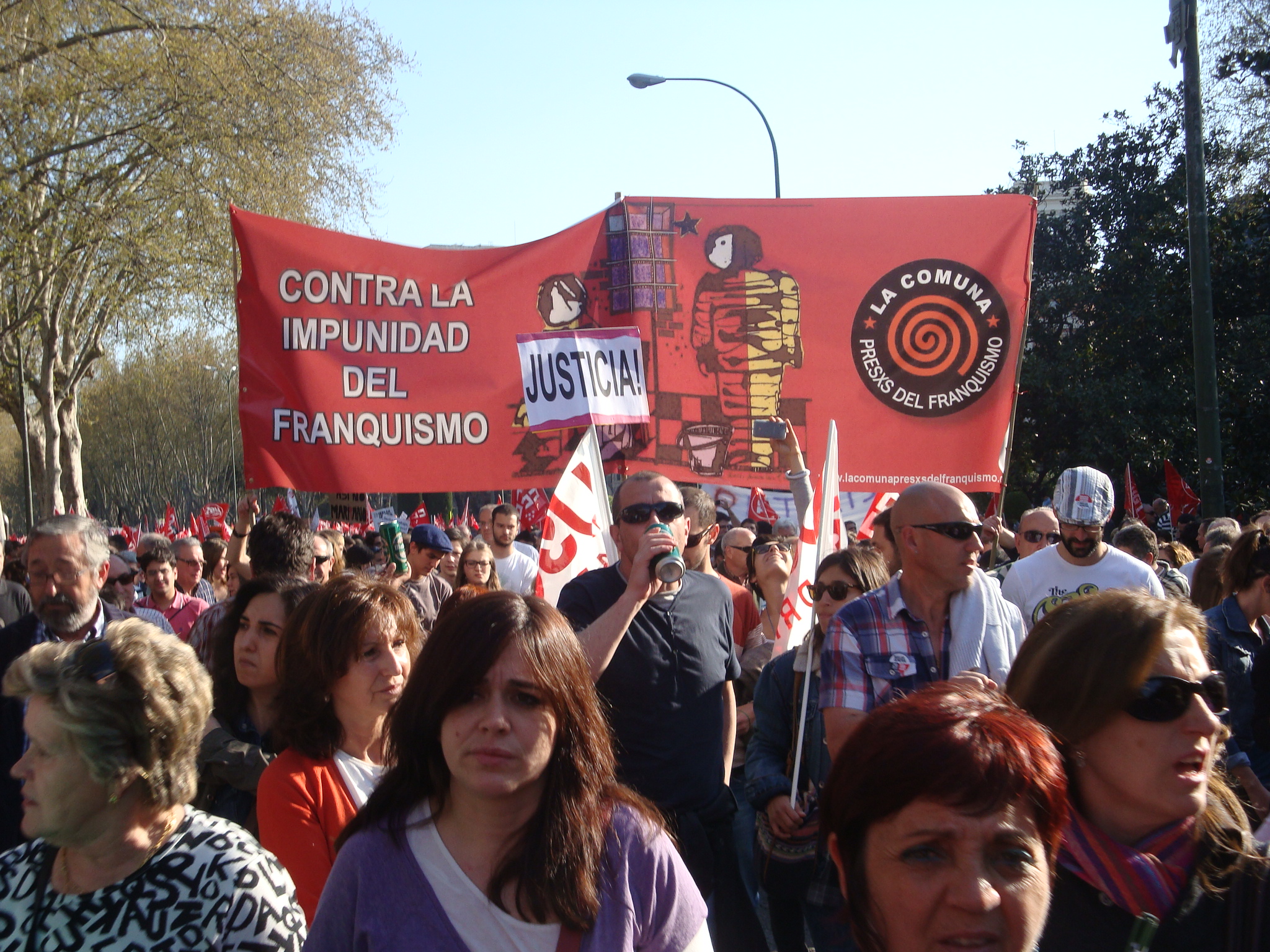 The conditions have changed, but the struggle is still the same: Unite against fascism impunity !

by Marta Rodriguez on November  2012 In the summer of 1977, the newly democratic Spanish government passed the Law 46/1977, granting thousands of political prisoners amnesty for the crimes of which they were imprisoned. Whilst this law granted them their freedom to resume their lives under the newly democratic nation of Spain, it did not bring them any closer to justice.

Opposition to Europe’s longest reigning fascist government had been met with an iron fist. Those lucky enough to escape the fate of assassination, disappearance or execution were faced with inhumane prison conditions. Inadequate food, beatings and various forms of torture were a daily reality. Many of those imprisoned were guilty of crimes that were little more than daring to print subversive literature, organizing demonstrations against the execution of political prisoners, or workplace unionizing.

Thirty-seven years later, there has not been a single Spanish investigation to hold those responsible for state crimes to account. The reasoning behind this is a simple one: Due to Law 46-1977 the perpetrators of State crimes were also granted immunity and free to carry on with their duties in this newly democratic state. Some of the same people implicated in cases of murder and torture continued to, and in some cases still to this day, occupy places in the state apparatus. The Police, Military, Prison services and judicial system are all implicated, with later including the Supreme Judiciary Power, whose membership includes those with explicit links to the dictatorship and its subsequent crimes.

This simple law that states has consequently produced a political culture that is both incapable and unwilling to face neither its past nor recognize the present. At the very foundation of this modern democratic nation lies criminality and impunity. No society can survive the ignorance of its own history without inviting the repetition of its past mistakes. This is not to say that various sections of the Spanish society are not trying to rectify the past, however they face an uphill battle. Within the Spanish legal system, attempts to investigate the Francoist Regime for its crimes during both the civil war and its subsequent 36 year reign are unlawful. The most notable recent example saw the Judge Baltasar Garzón, banned from the legal profession for investigating these crimes. However, an old movement is reviving.

With the aim of fighting for the practice of human rights, freedoms and accountability that have not yet recovered from the losses sustained as a result of the fascist dictatorship, a group of former political prisoners “La Comuna” was created. They are amongst the last victims from this period of history still alive. It is crucial we hold accountability of the perpetrators of these crimes now that still their last victims can give names, places and revive the memories of these atrocities. Abandoned by the Spanish justice system, La Comuna has focused on both direct action and the utilization of international law to question the legitimacy and legality of state and its upholding of Law 46/1977 in order to unmask this veiled period of history to ensure its lessons remain in our collective memory.

Where there should be a clear unity in the will to account for the past, there is a division in opinion when it comes to issues such as the exhumation of mass graves, prosecuting those accountable or the removal of names of public places that refer to Franco. This division in the public sphere and the silencing of pleas for justice from the side of the State, unveils an immense wall of impunity that has been untouchable for more than 30 years of suppose “democracy” in my country.
Whilst the current financial crisis has seen the Spanish government amending the constitution to appease those in positions of financial power, it is still proven inept to amend a single law that would see those responsible for crimes against humanity brought to justice and offer their victims or their families some sense of closure. In the words of a former prisoner who dared to dream of an accountable society: “The conditions have changed, but the struggle is still the same.”