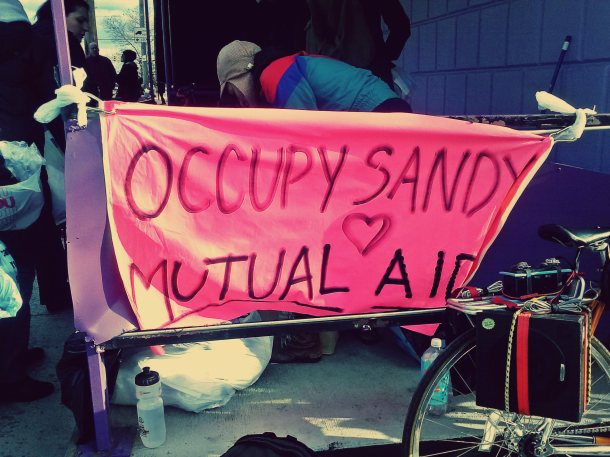 At an organizational meeting last Sunday, the office of New York Mayor Michael Bloomberg finally recognized what had become one of the major national news story of the post-election week: the extraordinary community relief efforts by the Occupy movement in the wake of Hurricane Sandy. Mainstream media outlets from The New York Times to the Washington Post to the online magazine Slate have reported on the swift and effective response of the umbrella group that has been calling itself Occupy Sandy. To borrow the metaphor of Times reporter Alan Feuer, it would seem that after nearly a year of “wandering in a desert” of proposals for structural reform and theorizing about debt, the Occupy movement has finally found its true cause and ultimate commandment: just helping out.

For those who have followed the movement since its early days in the fall of 2011, however, the emergence of Occupy Sandy has been seen less as the endpoint of an erratic and itinerant journey than a necessary step in the ongoing evolution of the Occupy movement. What started on September 17 of last year as a protest against the disproportionate influence of Wall Street on the American political and economic systems quickly transitioned into an effort to create sustainable networks of community organization. The impetus, it is true, was simple. Occupy wanted community support networks that were not determined by the corporate logic of the “bottom line” or the victimization stigma that attaches to any movement that demands “entitlements” or “handouts” from the government. The encampment in Zucotti Park to which all could freely come and go symbolized an aspiration that would be central to the 2012 election. This should not be a country or a world divided into givers and takers, corporate “job creators” and Romney’s now-infamous “47 percent.” In an era in which we are increasingly coming to terms with the fact that technologies such as the Internet that are essential to our daily lives have not been built and sustained by the government or the private sector but by “peer networks,” this emphasis on grassroots connectivity was not incidental to the early success of the movement. To acknowledge the simple point that everyone — working-class, middle class, and homeless; black, white, and Latino — both contributes to and benefits from our society could become the baseline for a new political discourse. Within the first week of setting up camp in Zucotti Park, people in Occupy started talking about the importance of systems of “mutual aid” rather than systems of “charity.” Charity means: “I’m fine, so I’ll give you something.” Mutual aid means: “We’re all in this together, so let’s help each other out.”

The distinction between charity and mutual aid was often met with the usual sneers about the idealism of Occupy Wall Street. Yet the recent efforts of Occupy Sandy have demonstrated the practical and logistical value of mutual aid. While government agencies like FEMA have struggled to mobilize their bureaucratic machinery and large charitable organizations like the Red Cross have gotten stalled in attempts to funnel money, clothes, and food from donors to victims, Occupy Sandy has been successful in large part because it offers itself as a network of and for people and communities. The relief centers set up by Occupy Sandy have prioritizedmeeting people’s needs directly rather than telling them what to do and how to get help. The organizer Catherine Yeager put it succinctly in an interview with Democracy Now outside a relief hub in the Rockaways: “FEMA down the street… is handing out pieces of paper that tell you to call a phone number to get help. Here, you come, and you get help immediately.” This determination to address basic needs has been a concern of the Occupy movement from the very beginning, as anyone who ate the free meals provided by the group Occupy Kitchen in the encampment at Zucotti Park last year will know. It is not that Occupy has seen the light. It is that the relief work after Hurricane Sandy has allowed the world to bear witness to the fact that Occupy and its 99 percent slogan have always been about more than just protest.

Perhaps the biggest shift in public perception that has taken place over the last few weeks is the realization that the Occupy movement is as good at cooperating with communities as it is at protesting inequality. Similarly, some of the more intransigent members of Occupy have recognized that, despite the insufficiency of the response by FEMA and large charity organizations, many members of state and local governments have been tirelessly working to help New York communities rebuild and restore. Residents on Staten Island gushed about the dedication of the Department of Sanitation workers who were removing rubble from collapsed and damaged houses day and night, and comments from multiple sources indicate that police officers and military personnel have coordinated directly with Occupy Sandy relief hubs. These are good signs. One of the main obstacles that Occupy has confronted in the last year has been its tendency to consecrate a stereotypical image of the activist as its public face, failing to acknowledge and accept that anyone who builds truly democratic community structures should be considered part of the movement. Hopefully the heightened publicity surrounding Occupy Sandy will help to underscore the inclusiveness of its aims and put to rest the idea that Occupy is at its core an “anti” movement. Let’s start by admitting that relief hubs are not the Promised Land that errant onetime-protesters have somehow wandered into, but one more destination on our shared route to profound and constructive political, economic, and social change.