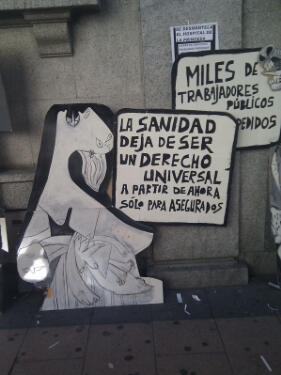 Thousands of people have peacefully demonstrated at the doors of Hospital de la Princesa on Diego de León street in Madrid.

This public health center, one of the most important that Madrid relies on and that has served millions of patients since opening, is going to suffer a drastic change of activity due to budget cuts and consequently a dismantling of the specialized services offered there.

Currently it is one of the most well-equipped hospitals in the city, in facilities, services, specialized areas and research. It boasts a staff of highly qualified professionals and furthermore, patient treatment has been noted to be consistently exemplary.

The president of the Community of Madrid intends to designate these facilities for geriatric care for patients with mild conditions, therefore eliminating medical specialties, urgent care, ambulance services and considerable endowments for the scientific research conducted there.

This operational budget cut is supposedly aimed at eliminating redundant services. However, in practice this would translate to overcrowding in other public hospitals and a decline in the quality of healthcare.

The current healthcare system is a traditional, social model in contrast with the proposed measures that would privatize these services. Through privatization they would externalize health services just like non-health services. This would mean that public hospital personnel, including longtime staff members, would have to look for work in other hospitals – given that although they would continue to receive public money, management would be private.

According to a healthcare worker who participated in the demonstration, healthcare will soon suffer major changes:

“10% of public healthcare centers will be privatized. The Hospital de la Princesa will be converted into a geriatric center. It’s unknown what they are going to do with the Carlos III Hospital. The Cardiac Institute will become a type of specialized unit of the Clinic Hospital. The privatization of six new hospitals created in 2008, whose funds will continue to be public money.”

The companies bidding to become owners of these six hospitals that are going to be privatized include: Capio Sanidad and Rivera Salud.

Capio Sanidad is the company that manages private healthcare in Valdemoro and Móstoles, two key neighborhoods in Madrid in which workers’ conditions are notably worse than in other public hospitals, according to one of the healthcare professionals at the demonstration.

Note that in the stated company one of the shareholders is Rodrigo Rato (former president of the economic ministry in the José María Aznar administration and former director of Banquia) and on his board of directors is Ignacio López del Hierro, husband of Dolores Cospedal (President of Castilla la Mancha) and that Teresa Echániz, sister of José Ignacio Echaniz (Healthcare Advisor), is a subdirector of research at Capio Sanidad.

The demonstration took place peacefully stopping traffic on Diego de León street and adjacent streets. Beginning at 11:00a and ending around 1:00p, thousands of people, among them public hospital workers, patients, and others who rely of Hospital de la Princesa, have raised their voices for the right to public healthcare – quality, free, and universal.

There were no apparent incidents except for the identification of some citizens by government security forces that had done nothing remotely violent or illegal, treating participation in a protest that was not officially approved (although it was announced through media and social networks) as a criminal act.

Despite facing coercion through administrative offense and economic sanction, the protests will continue indefinitely every day at 11:00a and 6:00p.

In related news, last week a new law was passed requiring any citizen who wants to make a formal administrative complaint against the government to pay fees up to 2,300 euros to file it. Through these measures they are once again impeding the constitutional right to defense against judicial attacks by the government, though even more unscrupulously than in the past.