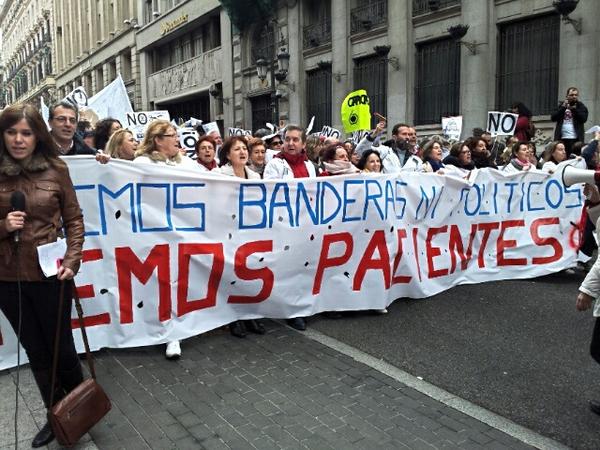 Source:eldiario.es
Translation: Possible thanks to TTS twitter followers, special thanks to @Dali_Moral

Another ‘white tide’ of public health workers and users in Madrid flodded the streets of the capital on Sunday morning to protest against a plan to restructure the public health sector announced by the the regional government of the Community of Madrid. The plan intends to privatise the administration of six public hospitals and 27 centres for primary care.

‘Public health must be protected not marketted’, ‘Murdering health care cuts’ and ‘They save the banks and close down the hospitals’ are some of the messages cried by thousands of people dressed in white coats marching in four columns in a demonstration organised against the plans of the regional government which had the main hospitals of the Community as points of departure.

After blocking the Paseo de la Castellana (a main artery of the Capital) the four columns gathered in Plaza Cibeles at 12 noon and from there they headed to their final destination at Puerta del Sol where the regional government has its seat.

During the march the protesters demanded the resignation of the Regional Health Minister, Mr Javier Fernández-Lasquetty. Next Monday Mr Fernández Lasquetty is meeting the Coordinating Committee of Health Care Professionals to ask the Committee representatives for specific proposals that would allow the government to save the 533 millions of euros to be cut in the regional health care budget. Also on Monday at 8:30 a.m. it will take place a meeting between the Directorate for Human Resources and CSIF (a Union of Public Servants) together with the Sectorial Committee for several union workers (SATSE, CC.OO., CSIT-UP, UGT, AMYTS y USAE) who will present to the Regional Ministry their proposals for reducing public spending.

Despite these meetings, health care users and workers have emphasized that the protests will continue and new actions are programmed such as a demonstration on the 19th of December called by the Sectorial Committee for the unions. A march against the so-called “Sustainability Plan” will be held from the Rayo Vallecano football stadium to the seat of the Assembly of Madrid. Another action planned for the 20th of December involves a sit-in in front of the building of the Health Care Ministry to be held during a meeting of the Inter-territorial Council for Health Care to discuss budget reduction measures.

Longer than a month defending the Health Care System

Madrid’s public health care users and workers have been protesting for more than a month against the plans of the regional goverment presided by Mr Ignacio González. For several Sundays, the white colour has been taking the centre of Madrid. After the first ‘white tide’ which took place on the 18th of November, unions represented by the Sectorial Committe for Health Care Unions (Satse, CCOO, Amyts, CSIT, UGT and USAE) together with the union AFEM called for a demonstration on the 27th of November which gathered more than 15,000 people (70,000 according to the unions). The protest was held at the end of a 48-hours strike by health care workers.

Again, last Sunday thousands of people marched chanting the slogan ‘We are doctors, we are patients, we defend public health care’. The previous Wednesday a thousand people had gathered in front of the seat of the Assembly of Madrid to protest against the cuts on the health care budget. There, hundreds of health care workers and users denounced that the government of Madrid was using austerity as a mask to hide a plan to ‘privatise’ and ‘dismantle’ the public health care system. The police arrested a person who allegedlly had tried to get into the building.

Since the plan was announced last October 31, workers are keeping lock-ins at twenty-odd hospitals in Madrid. Citizen initiatives have also been seconded, such as #abrazaTuHospital (hug your hospital) in which thousands of people made human chains around health centres. The regional Health Minister referred to the protest as ‘a show of affection’ to the health centres and to those who work in them. In addition, since the Health Minister’s Office ordered the removal of information placards about the planned measures because ‘they can be misleading’, white sheets can be seen hanging from windows and balconies on numerous buildings in the region.