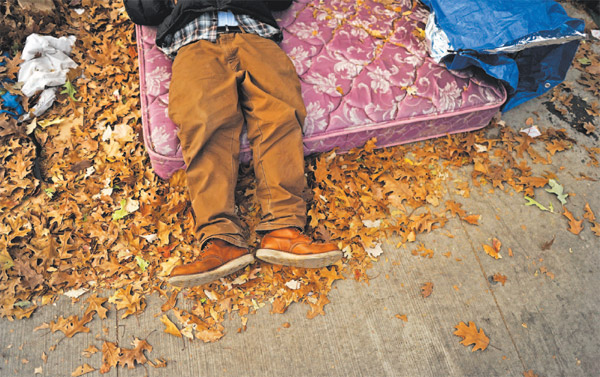 it is strange to think about Finn. too many questions floating around about what makes us human. grotesque, inappropriate and poisonous, yet orgasmic to the point of liberation. political bodies like Occupy Wall Street aren’t any different. you check the pulse to see if it is dead.

whoever had a loved one perish in front of their eyes quickly learns that death is not an instant. it is rather a process. a poignant singularity. that one slow decay of function and corporeal integrity; ~ a dissipation of the vital. death comes with rigor mortis, a sort of rigid immobility. what remains vital to life, though? to movement, to a [political] movement? what keeps it going towards its political horizon?

one day, a victim of a cardiac arrest arrived in the morgue. after preparing the corpse for a thorough physical, accessing its cavities, collecting postulates, dogmas and fluids, one could finally diagnose the massive transmural infarction that ripped its left ventricle open. the pericardium flooded and compressed the chamber. blood was where it shouldn’t be. yes:: all that was peripheral to the heart of #occupy, in the end, strangled its chambers into massive submission. the killing of bloom, a restriction of ontological possibilities.

now #occupy is a body in the mortuary. or maybe, a body in a cocoon.

might be time to ask Occupy Wall Street — which de facto is now its many OFFSPRINGS, offshoots — if they will overcome the collective identity crisis and embrace the transmutation of its old body politik into this entirely new creature. what is embodiment?

what clearly emerges from the #OWS chrysalis is not a butterfly — what came out from it is a political Chimera. you only need to observe #OccupySandy, #Novads, #StrikeDebt, and many other ethotic constellations out there in the starry night of #occupy to see how our universe looks like today.

and it is still beautiful.

our real enemy in the quest for horizontalism was the uneven circulation of biopower. the “social capital” that ran through our daily relations nurtured few at the expense of the many. in every instance, every created space. aye, the assemblies gathered activated bodies and that was a success in and of itself, but as far as horizontalism goes, empowerment was unevenly distributed. collapse was inevitable ~ and here we are.

how can occupiers, or whatever post-mortem name moving forward, create fluid-flexible architectures that are able to channel biopower to all the political tissues in need of nurturing? and not only to those few who accrue massive amounts of biopower? — the political question is in fact a physiological one.

and it’s no one’s fault. as was said, it is EMERGENCE :: the result of infinite autonomous decisions, individual and collective.

and where is #OWS right now? is the morgue really the end?

“death is only the beginning”, says the Egyptian book of the dead. so probably there is more to the network now than ever before.

the sea may kill the Nile, but only to make it infinite. we have reached the end of the delta, where all the diverse political currents flow to their place in the political spectrum. it’s a kaleidoscope. we recognized our alterity, our DIVERSITY. the liberals are here to stay [weren’t they always here anyway?] the radicals of the Left and Libertarians now understand that DIVERSITY OF PROCESS doesn’t necessarily mean political nihilism, and the right wing bigots, well… these continue their fierce counter-attack.

but if we are to move forward and beyond this dead carcass, we MUST recognize our diversity. a plurality which cannot (and maybe should not?) be contained in containers. the old body politik of occupy collapsed into itself, but like a supernova, it outshined an entire galaxy and gave birth to thousands of FRESH political constellations. which can still find lot’s of resonance and common ground to work together. and when this is not possible, it is ok as well.

now, we live a Kafkaesque moment; a deep estrangement; a critical ambivalence and a crossing to the other shore.

#occupy in post-Diaspora becomes a CHIMERA.

This is the End Of the World.
this is an obituary.
and at the same time,
a birth certificate.

Here are some links: