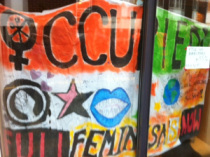 From: http://reclaimit2013.wordpress.com/
Seventy activists from feminist groups, Occupy, UK Uncut, Solidarity Federation and Disabled People Against Cuts have today occupied London’s historic Women’s Library in a daring bid to save it from closure.

In a secret action, a small group of women from the specially-formed Reclaim It! group led the take-over of the library in central London at 1.30pm. Within minutes they were joined by a larger crowd of protestors who had been led to the location by the organisers from two meeting points.

The occupation is part of a growing wave of feminist anger against the government’s austerity regime. Banners hung from the occupied building highlight the effect the cuts are having on women, such as the nearly 30,000 women turned away from refuges last year due to lack of space.

University history lecturer and library user Josie Foreman said: ‘The Women’s Library houses a world-renowned collection of women’s history. Much of its archive documents women’s struggles for equality. At a time when women are bearing the brunt of this government’s savage cuts, cuts which compound the gender inequality of our society, this history is more important than ever. We are here to fight for our right to access that history, which is our history.’

The occupation was planned to mark International Women’s Day, ironically the day The Women’s Library exhibition ‘The Long March to Equality’ was due to end pending the building’s closure.

Local resident and mother Jane Summers said: ‘Women have suffered the brutal blows of this government’s attacks on vulnerable people. Cuts have ripped vital services from the heart of our communities and endangered lives through the reckless closure of women’s refuges and domestic violence services. In occupying The Women’s Library, a treasure trove of women’s history, we stand in the tradition of the suffragettes and Greenham Common protestors in our realisation that at certain moments in history it is ‘deeds, not words’ that matter.’