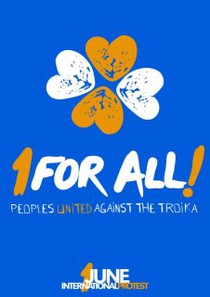 Europe is under a violent attack by the financial capital, represented by the troika (IMF, ECB, EC) and by the successive governments that apply concerted policies with these entities, despising and destroying the people. We know that this offensive is set on breaking the peoples, rendering them slaves of debt and austerity. This offensive crosses Europe and it must be defeated by an international struggle.

Each one of us, in each country, in each city, in each house, with our own specificities, feels directly the measures that annihilate the rights conquered throughout the decades, measures which aggravate unemployment, privatize everything that can make a profit and repel the countries’ sovereignties under the propaganda of “external help”. It is urgent that we join forces to fight-off this attack.

The appeal we launched for a decentralized international protest has circulated through dozens of movements in Spain, France, Italy, Greece, Cyprus, Ireland, England, Scotland, Germany and Slovenia. Several international activists, from different European countries, were present In a meeting on the 26th of April, in Lisbon, where this international proposal was discussed.

In the end, we reached a consensus to launch an international protest for the next 1st of June, under the motto “Peoples United Against the Troika!”.

This is the beginning of a decentralized, inclusive and participatory process. We wish to build it collectively, joining all forces available. Henceforth, the date of the 1st of June will be spread on a European scale, and we urge everyone to join this international protest against the troika and against austerity… for the peoples to take control of their lives.

We wish to continue to broaden our contacts, both nationally and internationally, for we are aware that only the sum of our voices can stop the new waves of austerity that are being prepared. The peoples of Europe have demonstrated in several moments that they’re not available for more sacrifices, in the name of a future that will never come. The time has come for a massive demonstration of the capacity of these peoples to coordinate the struggle against these policies.

From the North to the South of Europe, let us take the streets against austerity!