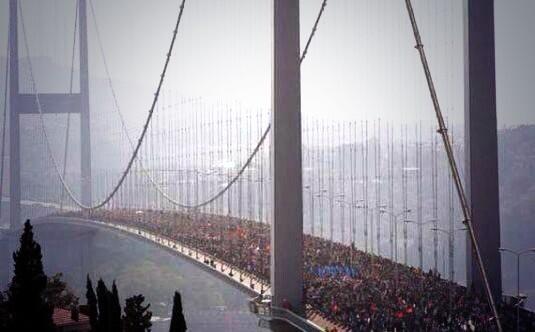 Since the 27th of May, Istanbulites from all social and political backgrounds and ages and from all over the city had been continuing a peaceful resistance in Gezi Park, the city’s largest public park, soon to be demolished due to a so-called renewal project. This Project foresees the erection of a big mall (designed as the replica of the once Ottoman Artillery Barracks) in the place of those trees.

The police intervened in the park 3 times, each more violent than the other:

The first intervention was in the morning of May 28th, a crowd of about 50 protestors were tear-gassed directly in their faces.

In solidarity with the protestors, hundreds arrived in the evening and the occupation movement grew bigger. Right afterwards, the second intervention came early in the morning of May 30th at 5 am. The riot police set fire to the tents and tear gas and pepper sprays were used incessantly, causing serious injuries.

Against this inhumanity and extreme violence, the reaction was the occupation of the park, this time by thousands.

And this morning proved to be the culmination of violence and barbarism that no words can describe, with an unproportional use of force. The exit of the park was blocked by the police, thus locking the group in the park. The protester were then taken under crossfire of tear gas and pepper bombs, nearly getting choked to death. The only way out was by breaking the walls and many were wounded during this escape.

At the moment, brutal intervention against the protestors continues. The group has been pepper-sprayed and tear-gassed once more as they were leaving the area after reading their press call! At the moment, some are in Divan Hotel at Elmadag, having taken refuge there from the effect of the gas attacks.

Literally, almost all of Taksim Area, where Gezi Park is, is tear-gassed and pepper gas-sprayed; especially the side streets around Taksim Square are under clouds of gas.

Dear friends, we believe we need nothing else to add; the scenes talk for themselves.

Your valuable support and solidarity will indeed fortify our determination and resistance. Please share this news, name it and shame and blame the responsibles so that this insanity and brutality practiced against human rights defenders can be terminated through international pressure.

CALL TO THE INTERNATIONAL OLYMPIC COMMITEE

This is also a call to the IOC to take Turkey out of its list of 2020.

If Olympics means friendship, if Olympic Games mean peace and companionship, these videos are enough proof of how the government violates the ideals of Olympics. Having Istanbul on the list will be tantamount to pepper-gassing these ideals.

In the name of solidarity and friendship