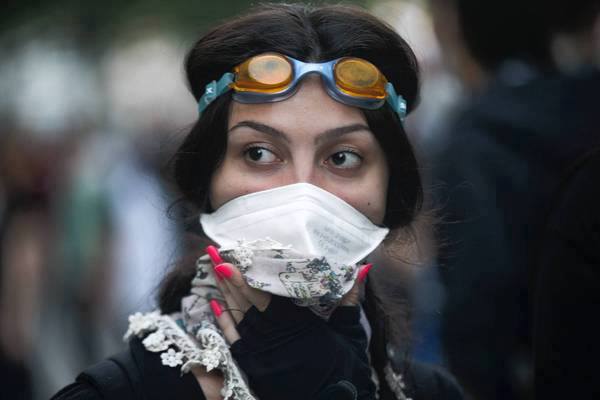 Here we are going to publish a post written in tts mailing list, giving a brief update on #occupygezi. We’ve omitted the personal details and just reproduce the analysis about what happening in Turkey for its interest.

” As you know the ‘unrest’ sparked from the Gezi Park which is located next to the Taksim Square. Where big clashes took place last month between police and the people ıt was about the May 1 mobilisation. The meetings organised by Gezi Parkı resistance platform which is mainly resisting the commodification of the City and public spaces..They started to gather at the Park on the 28 and 29. The engagement with police on the 30st and the brutal attacks came from police on the 31st however sparked the massive nation wide uprising against the government. Social media has been used by actıvısts and cıtızens exactly like it was used in Tunis, Egypt, 15M, 15O and OccupyWS, Peaceful protest meetings met with brutal oppression by the police,pictures and info coming out on that second generated anger and it spread with the speed of light. There were reports from uprising and clashes at around 70 cities ın 3rd day of the protests, illions of people went out to the streets, parks and squares, most of the time peacefully in almost each case polıce attacked severely by using strong gasses and chemicals.
There were speculations of course but feelings anger and message spread very fast.

The main stream Media, almost 30 privately owned TV channels as well as many radio stations didn’t put anything on air about what was happening on the street and central squares across the country ın many large cities including largest ones: Istanbul, Ankara, Izmir, Adana, Eskisehir. Since 2 days ago this was the case and,almost 5 days long total black out was adding more people to the revolt. The aggressive and macho reaction of the head of the government towards masses and media’s total silence, only grew the anger and participation. Many non party, non organised people followed the events via social media, live
streaming, twitter, facebook and went out to the streets. Same as in other cases like Wall Street occupation but here participation went massive in very short time, without mainstream media coverage. Being under attack and huge protests

now media is apologising now and started to show some moderate and very limited most of the time manipulated news from the ground. The uprising and message went beyond the Park in the first day, democracy become the central issue, people everywhere calls Erdogan to resign, solidarity actions and groups spread across the world, it is feeding in other countries as it happened before with the precious uprisings.
At the moment protests and gatherings continue and no one knows where is this headed, the momentum is lower today thogh in comparison to yesterday on the twıtter and Facebook, but also on the streets for the moment. İt might be after the apologies came from deputy prime minister but also president Gul’s softer approach. The day before and yesterday we had also general strıkes by two large confederatıons, taking place. So today started as a working day It might get ınore intense towards the evening again. There were also arrests related to tweets sent, and other issues are coming up like the deregulatıon of the status of the national Parks so they could open them to markets.

Brıef background for the Turkish context:
AKP was very successful in braking the rule of traditional elite structure and capturing the State during its first 2 terms. As one of the AKP ministers said internal and external conditions were overlapping, in favour of AKP. Like the post 9/11 US policy, crisis in the EU, rising of the BRICS etc. By massive privatisations, reforms/deregulation in health, education, social security as well as labour market they could attract massive foreign investments; large portion of the oil profits from the Gulf flew in some says even in cash carried by large planes.

Massive infrastructure and City Transformation projects have been launched and tenders given to emerging new ‘green’ Anatolian capital,.Middle and small sized entrepreneurs transformed and interlocked to these internationalising capital groups. Most importantly traditionally ruling Military cadre jailed and the rest got under control. Secret service and other state apparatus as well, like juridical system, totally captured by the government, but also its ally international Gulen Cult, whose leader Fetullah Gulen is living in the US. And the Cult especially strong in and control the police forces, President Gul is the man of Gulen.

This was also meant commodıfıcatıon of rivers, lakes, forests, beaches, parks and trees that are potentially providing large rants to be transferred to emerging new Islamic elite. Among many other platforms formed in last years Gezi Park Resistance Platform, alliance of organisations, left parties and groups were active in the fight against the expansion of neoliberalism to all sphares of life its disasterous outcomes.
This is for the moment.,I will try to write more on the ‘Capulcu’ charachter of the movement and configuration of forces alliances,in solidarity