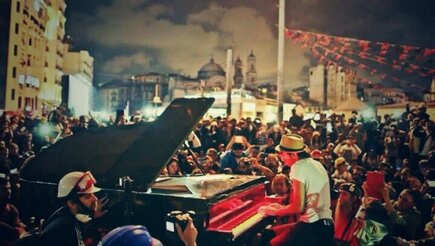 In the last few weeks I have been talking with many Turkish people: I listened to their stories, looked at pictures and videos they had sent me, chatted with them. I felt their hope and their anger, trying to understand their feelings and express them in my articles. Then, when you get emails like this one, a journalistic summary suddenly seems to be useless: you realize that such an email cannot be shortened and the only thing you can do is to translate it as literally as possible so that you don’t miss a word; because every sentence is important and the testimony of a young man has turned into a declaration of love for his people and his country. Here is the letter:
I am trying to follow international media since the start of the Turkish Resistance but I don’t think there is enough coverage from the world media that asks and answers these questions: ‘Who are they?’ and ‘What are they trying to do?’. I can’t blame them, even most of my friends who resist with me can’t clearly understand what is actually going on right now.

What’s happening right now in Turkey has never occurred before in recent history. We are resisting a fascist prime minister and brutal police violence peacefully. We don’t have any guns, 1% of us are throwing stones at fully armed police forces and the other 99% are trying to stop them doing it. We are amazingly conscientious. 90% of the crowd has not supported any political party in their lives, most of them have never identified a candidate to vote for in the elections that they felt represented their interests. I haven’t heard a single anti-religious chant in the events. There is just one chant which is targeted towards the government, simply ‘Government resign’. We are chanting this constantly and mostly at one person: Recep Tayyip Erdogan. We don’t want to get rid of the government which is elected in a fair, democratic election, although popular opinion is that it is an oppressive and restrictive one. We know what we don’t like and we have had to take to the streets to demonstrate (peacefully) that enough is enough. The vast majority of us have have been extremely good at exercising restraint – we have been very careful not to cross the line, fighting violence with violence as we do not want our cause to be devalued. Our unwillingness to debase ourselves and descend into pointless violence is of paramount importance especially when fighting against a tyrant ruler who is narcissistic and cruel. Due to the fact that his administration has been credited with unprecedented economic and political stability by the Western media, Erdogan has become an egomaniac, he believes he is untouchable and often acts in direct contravention of our secular constitution. He has lost his ability to listen and believes he has an enormous army that supports him no matter what happens.

Saying that, this is completely different to the Arab Spring. We are not against a corrupt government (although they are corrupt). It is not about money, although we are not a rich country. We have double GDP per capita compared to Egypt or Tunisia. And It is not like Occupy Wall Street, although we don’t like the system either. It is something completely different, completely new to the world. This is not a revolution. This is a resistance movement of people towards a person who breaks their hearts, who exploits their sense of honour, who thinks he can dictate their lives. This is a resistance movement against his police forces, who use brutal force against people who are playing guitar and reading books as a way of protesting. This is an intelligent and educated crowd. Things people share on social media and chant in the streets are insightful and often hilariously funny as, fortunately, we have a great sense of irony. Our government seems to want to take part by releasing ridiculous statements such as these: ‘We have not shut down social media during these events and this clearly shows how democratic we are.’

Here is a video of me with a Celtic jersey throwing a tear gas grenade back to where it came from, before it affects people (video 17, editor’s note). It barely affected me because I has a gas mask and gloves. I saw many people including a lot of young ladies who did the same thing with their bare hands and without a mask. This a kind of bravery I have never witnessed before and will probably never see again. This is a movement no one has been prepared for. Neither the USA, nor the UK has planned for it or understands it. We don’t want them to take part in our resistance. We know what they have been doing to our country for decades and refuse to take their money or become entangled in their power struggles in the East.

This is a movement without a head, without a leader. The bond between the people is what gives the movement its momentum. In other words this is a resistance without guns and leaders but with intellect, education, humor and a big big heart at the centre of it. The good thing is we have already gained enormous ground and that is what most of the people, including my friends don’t understand. People are still thinking in terms of vote shares, parties and leaders to vote for. They are pessimistic that nothing will change and everything will go back to normal in a week. That is exactly what Erdogan has thought from the beginning. This is what he and my friends are missing. We have already won because:

– We are be incredibly powerful as we are united by our bond against a common enemy – someone who constantly humiliates us;

– People learn unity and cooperation not from leftist books but from standing in the streets together;

– There are a lot of people who love and are proud of their country for the first time in their lives;

– We see that we can stand against brutal force with only our brains and our hearts.

The feeling of this victory is fantastic. I left Turkey 7 years ago to move to the USA to get out of a declining country just to be back 5 years later because I missed the 10 people I cared for. Now for the first time in my life I love more than 10 people. I am in love with everyone in the streets. I am proud of being a Turkish citizen for the first time in my life and it is an amazing feeling, definitely beyond any words. I am working as a technical director at a London based creative agency and on Friday morning I was working on a website of a luxury travel company. On Saturday, I was throwing tear gas grenades back at the police to protect the people I care about. Last week I was afraid that Turkey would be ruled by Sharia law like Iran, now I am thinking about how we can become a democratic and civilized country like Sweden. On Saturday my mother begged me not to go to the protests, yesterday she took my swimming goggles before joining the protesters herself.

This is a big and unique change. Culture in Turkey is changing bit by bit and it will take some time for people to get it. Most people will get it eventually and whoever doesn’t will get left behind. We have grown up, and now it’s time for our country to do the same.