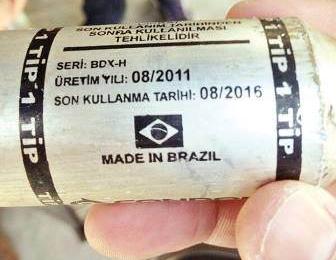 How it changes. When I was in Istanbul last April the mood was sombre. Even the most ebullient of friends were downcast. The latent hostility to the regime was always present, but the AKP’s hegemony, I was told many times, went deep. Erdoğan was a reptile, cynical but clever and not averse to quoting the odd verse from Nâzım Hikmet, the much-loved communist poet imprisoned by Atatürk. The poet had escaped in a boat and been rescued by a Soviet tanker. ‘Can you prove you’re Hikmet,’ the captain asked him. He laughed and pointed to a poster in the captain’s cabin which had his photograph on it. He died in Moscow in 1963. His remains are still in exile. Talk now was of food (the exquisite wafer-thin pizzas from the Syrian border) or the delights of children produced in middle age. Complaints were varied. An old cinema on İstiklal was about to be dynamited. It would be replaced by yet more characterless shops that have already disfigured this historic street with its arcades and Belle Epoque apartments (where, once upon a time, many wealthy Armenian merchant families lived).

There had been a few mild demonstrations against the execution of the movie house, but symbolic in character. The newspapers were talking of the regime’s latest PR triumph: sixty ‘wise men’ who would be consulted from time to time. There were photographs of their first assembly in the Dolmabahçe Palace, a suitably kitsch setting for a kitsch gathering. An old acquaintance, Murat Belge, was among their number. Encouraged by the indifference, Erdoğan proceeded with other plans: A shopping mall in Gezi Park, a new bridge over the Bosphorus and a new grand mosque to steal the landscape from Sinân’s delicate creations. The citizens of Istanbul were never asked for their views. It was this lack of any consultation that angered the citizens and triggered the occupation of the tiny green space in the heart of the city.

As we all now know, the spirit of conciliation is not the Turkish prime minister’s strong point. Nor is generosity of heart or mind. He loathes secular intellectuals, refers to the founders of the republic as drunkards or alcoholics (as if those were their defining characteristics rather than outwitting Lord Curzon and the British Empire to create a republic) and talks constantly of the danger from left-wing ‘terrorists’. When angry, which is often, Erdoğan takes on the character of a village bully, sometimes embarrassing his colleagues. Socially conservative, politically unscrupulous, economically beholden to the building industry and militarily/politically Nato’s favourite Islamists, the party in power ignored the voices on the street.

They were meant to be the model for other Muslim countries. Erdoğan’s arrogance in using violence – baton charges, water cannon and tear gas, against mainly young people – has wrecked the model. Hence the note of exasperation from the White House, and the familiar request that ‘both sides should show restraint.’ The police assault on unarmed and peaceful occupiers backfired badly. Within 48 hours every city, bar four, had experienced solidarity demonstrations and occupations of public places. The tiny protest had grown into a national uprising against the sultan of the building trades, large and small. When I arrived in Ankara on the evening of 15 June, the tell-tale signs were visible. Water-tanks and scorpions (police command cars) were stationed on the main streets, ready to go into action.

It’s the first time I’ve experienced protests that begin at night. People come home from work, change, eat, discard their ties and get ready. Water bottles and handkerchief, soaked to protect against tear gas. At 10 or 11 p.m. they come out, usually in small groups, crossing streets like shadows till they reach Kuğulu Park and smile as thousands are already there, chanting slogans, singing songs, taunting Erdoğan. The police attack. Barricades hurriedly go up using advertising boards, the odd car and anything to hand. Water cannon try to disperse them. They fail. Then the tear gas (imported from Brazil). It keeps coming. The demonstrators disperse, assemble again and so it goes on till 3 a.m. or later. Action will be resumed the following night.

While this is happening on the streets, in apartment windows the mothers and grandmothers of the demonstrators bang pots and pans in solidarity – and as a warning to Erdoğan, for this is a very old Turkish protest pioneered by Janissary corps to warn the Ottoman sultan that enough was enough. In Istanbul, when Erdoğan asked parents to take their kids home, thousands of mothers joined the occupation, bringing pots, spoons and pans with them. Erdoğan denounced the protestors as çapulcu: ‘looters’. As in Paris in May 1968, the young Turks chanted: ‘We are all çapulcu.’ When I visited Kuğulu Park there was a slogan on the wall: ‘Welcome to the çapulcu fest.’ Passionate arguments were taking place, free libraries in every corner, free food brought by parents, and hope written on young faces. Steve Bell’s cartoon of Erdoğan as a water tank dousing the people is on all their phones. I asked a young woman about the word. She laughed: ‘Yes. Our response was immediate. The semiotics of this uprising are certainly very interesting. But more importantly, what next? Our demobilisation would be a big tragedy.’ A young man interrupted: ‘We can’t hold on to the squares for ever. We need something more.’ How the new opposition regroups is difficult to say, but if a new democratically structured political movement is formed (like, for instance, Syriza in Greece) it could give a permanent voice to the people from below.

A monthly public assembly in Istanbul, Ankara, Izmir, Bodrum, Antakya and other cities to discuss the situation at home and abroad and report on the building of a new movement would create something permanent and make the clearing and reclearing of the squares a bit meaningless. This is my hope. Some agreed, but a young student piped up: ‘I’m a neoliberal capitalist and I’m here.’ Others laughed. I asked him why he was there. ‘Because of the police violence.’ ‘But the police violence is being used to defend neoliberal values.’ ‘No. Neoliberalism promotes liberal values.’ ‘Where?’ ‘In the United States.’ I said what had to be said. A woman doctor told me she had to leave for a doctor’s assembly. The government is demanding that doctors who have been treating thousands of wounded demonstrators must hand over their names. The assembly is unanimous. No. Turkey has suddenly changed. The new generation is on the parapets. To demonstrate that he still has mass support, Erdogan had to ship and bus his supporters from all over the country. Few were impressed. The battle lines for the next elections have been laid. The builder’s friend can’t be the prime minister again. He was hoping to amend the constitution and make it presidential or failing that, to become president à la Putin. It will be more difficult now. He should read Aziz Nesin’s popular short story, ‘The New Prime Minister’, in which the sultan, tiring of a politician who is getting all his ideas from a mule, appoints the animal in his stead. – See more at: http://www.lrb.co.uk/blog/2013/06/19/tariq-ali/in-ankara/#sthash.8Beeb9ke.dpuf