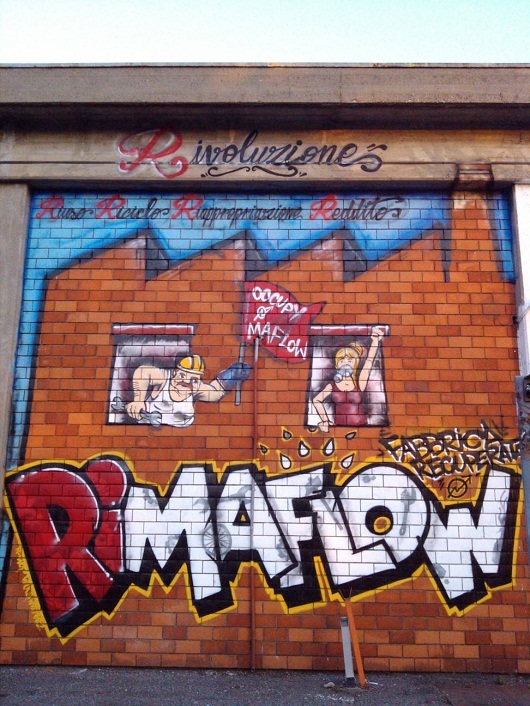 Have you heard the story about the Italian workers who took over the bankrupt company that previously employed them and started a new cooperative, all while doing something for the environment?

This is the story of Ri-Maflow.

n March2013, agroup of some fifty workers in the town ofTrezzanosul Naviglio nearMilan, decided to occupy the factory where they used to work and run it as a cooperative making and selling recycled electric and electronic components.

These workers were previously employed by Maflow, an Italian multinational that made pipes for car air-conditioning systems.

For many years, Maflow was a market leader servicing many big car companies; BMW was its biggest customer.

But after a series of financial difficulties, the company closed down its main Italian arms at the end of 2012.

The workers, however, refused to give in. A few days after they were made redundant, a group of former employees broke into the factory and started the machines again.

And that’s when Ri-Maflow was born as a social co-operative making its first steps towards providing a future for the occupiers and their families.

At its peak in 2007, Maflow comprised 23 factories across the world including four inItaly. There were 350 workers at the Trezzano plant alone.

Founded in 1973 under the nameMurray, the company was originally a role model for reconciling the need for profit with a strong commitment to its workers.

However, in 2004 it was sold to a private equity company and in 2009 it went into receivership after it declared 300 million euros of debt.

Various attempts were made to revive its ailing fortunes including a buy-out by the Polish industrial group Boryszew, who reduced the number of employees to 80.

It was during this time that the seeds of the idea of turning Maflow into a social enterprise were planted. Nevertheless, in December 2012 the Trezzano plant was closed for good.

Before the announcement of the closure, former Maflow workers were already holding sit-ins and strikes to fight for their jobs. They even pitched tents in front of the factory and camped outside. But once the factory was finally closed, they decided to occupy it.

The question was what to do next.

Michele Morini, one of the workers, explains: “We were quite confused, but after month-long discussions some of us decided that we could use the plant and the materials to start a cooperative.

“We would reuse the electric and electronic components, and kill two birds with one stone: creating a job for us in the long term, and doing something good for the planet.”

That’s how, in March 2013, Morini and 16 fellow workers founded Ri-Maflow, supported by another fifty former Maflow employees. Together, they set up the association Occupy Maflow.

“With the small bonuses we’ve received for being fired and with the social security allowances, we know that we can go on with this project for a couple of years without worrying too much about making our ends meet,” says Morini.

“And looking for a job, nowadays, is time and resource-demanding anyway, so we’ve chosen to invest in our future and in an environmentally-friendly activity.”

Writing our own rules

In the past few months, Ri-Maflow has attracted a considerable media attention inItalyand abroad, and its members have made contact with other similar organisations.

Through the Occupy Maflow association, they’ve hosted representatives from Argentina’s Fabricas Recuperadas(Recovered Factories) movement, Italy’s Officine Zero (a former company which repaired train coaches for the Italian railways and which was eventually taken over by workers to deal with recycling and reuse in transport) and  Vio.Me in Greece (another experiment of workers taking control of a bankrupt building company and kicking start the production using left-over material).

“We’ve just begun and we’re still far from being self-sufficient,” says Morini, “but we’re already receiving requests from other workers who are in the same situation, and they want to know how we built the co-op.

“Some people are already sending their CVs for our consideration. I smile when I get such mails, but I also hope that in the future we will be able to give a job to some of them. When we decided to start the Ri-Maflow, we thought we had the long overdue opportunity to make our own small contribution to change something in the capitalist system. To start writing our own rules. And if we hadn’t done it here and now, when would we have?”