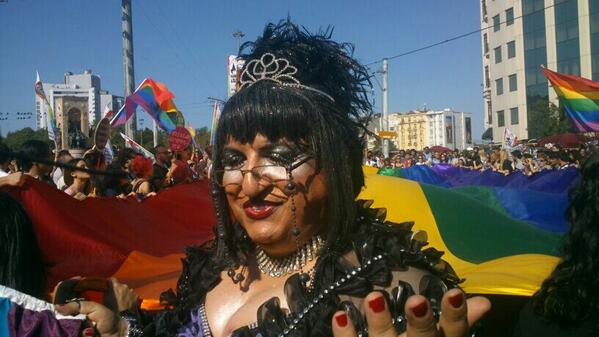 It’s pride week in Istanbul, and this time the term pride has a double meaning. On the one hand, the LGBT folk are proud to be queer, and on the other hand, after their heroic stand against police, the rest of us are proud to have them among us. Last Monday, the week kicked off with a good vibe and a swinging march through Istiklal Street. It was only a rehearsal. The big parade will be next Sunday.

Yesterday, indignation spread through Turkey as the man who killed Ethem Sarısülük with a real bullet was released, pending trial. The judge only needed a week to establish that the police officer in question acted within the ‘limits of self defense’.

It’s a dangerous precedent, because if the killer goes unpunished it may pave the way for a police officer’s ‘license to kill’. But it’s just as dangerous if you look at it from the other side. If a cop can fire at an unarmed protester and get away with it, then what should a protester be allowed to do to protect himself from police?

“The water cannon tried to spray me, your honour. It was only in self defense that I blew it up with a bazooka.” Or: “They were firing tear gas at us, your honour. So it was perfectly legitimate for us to shell them with mortars.”

These things are not going to work. Police can have good reasons to disperse a crowd, and a crowd can have better reasons to disperse police. Both sides can employ a series of escalating measures to achieve this objective. But there’s no point in killing each other. That’s not fair.

If you do, you have to respond for it. As a protester, and as a police officer. But there is a difference. A protester is a free agent, whereas a cop acts on orders. This means that in the interest of discipline a commanding officer should bear responsibility for the behaviour of his troops. If one of them acts with disproportionate force, then the commanding officer will have to be punished to the same extent as his subordinate. You kill someone, you go to jail. And your commander with you. This could go all the way to the top. If the prime minister willfully orders a violent crackdown, he will have to be held accountable for all ensuing damage inflicted upon his own citizens.

After the decision to release the officer was announced, the local popular assemblies immediately organised a series of demonstrations. We went to stream the one in Kadıköy, where thousands of people marched from their home base in Yoğurtçu Park to the centre of the district and back.

It was good, it was loud, and the whole district played its part. Those who didn’t march and chant, banged their pots and pans from the windows. Those who were sitting in the bars applauded as we paraded by. The cars honked, the drivers raised their fingers in sign of V for victory.

“Kadıköy don’t sleep! Come down and take freedom into your own hands!” people chanted. And much more. “Rebellion! Revolution! Freedom!” To police: “Take off your gear and we will see who is the strongest!” And, one of my favourites: “A thousand greetings to Madrid, Athens, Tahrir and Brazil!”

Upon return to the park, people gathered in general assembly. The whole place is under permanent community occupation. There were two free bars – franchises of the original ‘Çalpulçu Cafe from Gezi Park – one library, a supply centre, an exposition and an art corner. After the GA, the Coordination group of about a hundred people met on the playground to discuss the demonstration and future events. Today, again, there will be protest marches in all of Turkey.

Napoleon reportedly said that if the world were one single state, Constantinople, the city of two continents, would be its capital. In these days, it truly feels that we are the centre. All around us, the world is rising up. From the Far East to the New World. Thailand, Indonesia, Korea, Bulgaria, Brazil, Paraguay. The first wave of revolt in 2011 was mainly limited to the western world. Now the movement is expanding into a #GlobalRevolution.

So be prepared. Soon, this show will come your way. It’s the biggest show you’ve ever seen. And you yourself are going to be the star! You’re going to love it, I can tell you. There’s nothing like revolution.