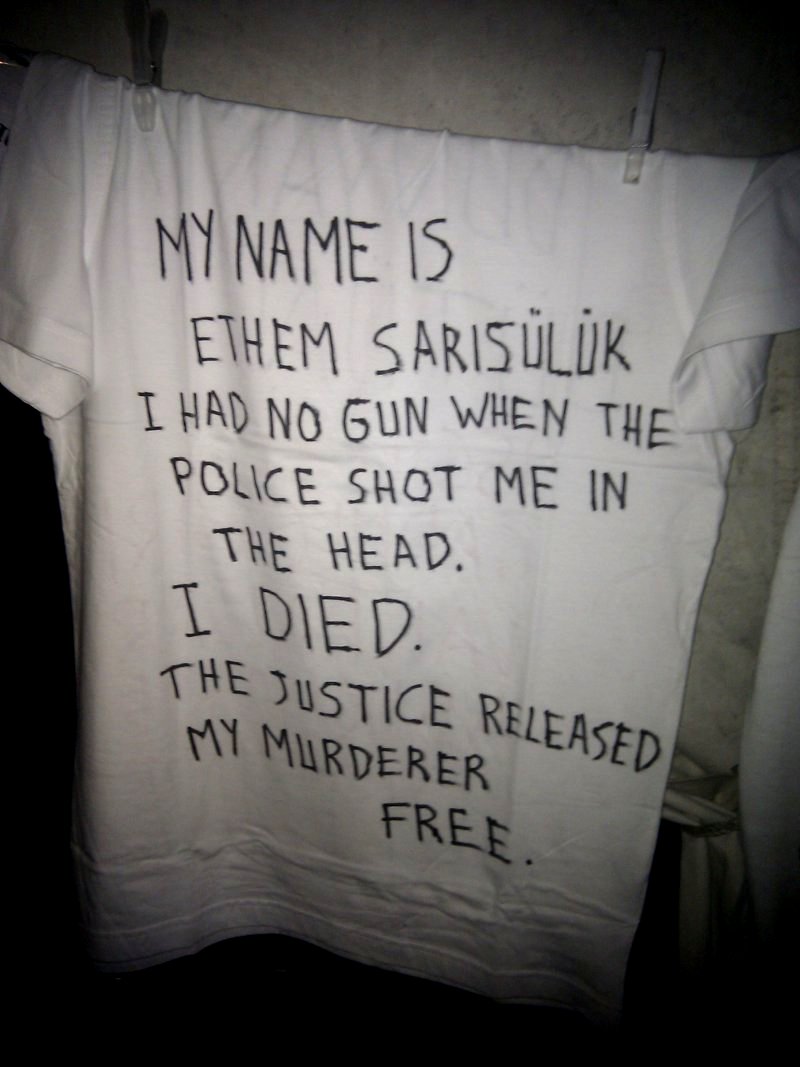 The weather is not helping to enjoy the life going on around the tent in solidarity with #occupygezi, but does not discourage them to do actions in support to what is happening in Turkey. A couple of days ago a event in Facebook appeared, an action to denounce the release of the police officer who killed Ethem Sarısülük. There is a need for justice in the case of Ethem Sarısülük, as it is known “He didn’t die,he was killed!”, these last days many actions took place around Turkey and now it was time to react outside.

The call was to meet in Alexanderplatz, in the center of Berlin, a very big square, surrounded by malls, shops, etc, not the best place to be visible but in the center of the city. In one corner of the square stands the WeltUrh, a clock that shows the times around the world.
A human chain surrounded the WeltUhr,  many of them wearing T-Shirts denouncing the fact the police who killed him is free, for some moment time had to stop, there is a need to remember those killed during the protests, to ask for justice in the case of Ethem Sarısülük, killed, as shows this video, by the police.
Around 50 or 60 people gathered, there were new faces, many of them were people probably not politically engaged with any party or organization but that have understood what is happening, this coming together, the strength and energie that comes from Turkey.

After an hour, the action came to an end and most of the people went back to the tent in solidarity with #occupygezi. In Turkey, one of the things that #occupygezi has changed is the fact that everybody can come together against the murder of an inocent, this time was , the 18 year old Medeni Yildirim. There is a feeling of being together and fighting together against injustice and for freedom. Friends that are in Istanbul have told us that national turkish were present for the first time in a demonstration denouncing the killing of a kurdish person, so it looks that a deep change is taking place inside turkish society, is that change going beyond the borders?

Let’s move back to Berlin, the reaction was inmediate and there was a demo in Kreuzberg, with around 100 people, crying for freedom, making Taksim present, trying to open spaces where dialog is possible.