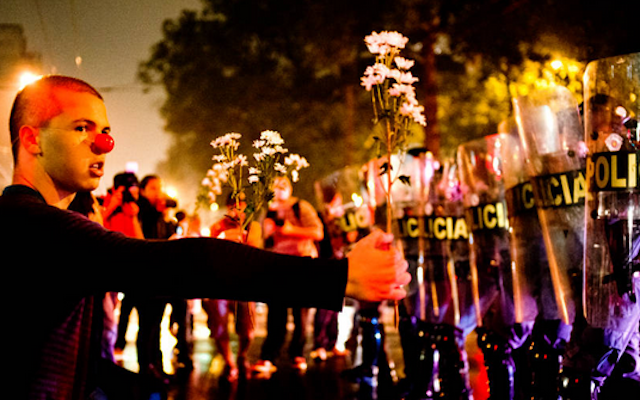 The sleeping giant is waking up. Brazil is awakening from the Fake Progress Dream of the 1%. Brazilians are taking the streets, but the media only talks about macro politics. Brazilian youth-and-not-so are demanding other economic, civic and social ways. But the media hides the facts:
political assemblies in public, occupations of municipal assemblies (as
Belo Horizontes´s occupation), new networked collectives fighting for the right to the city, for political participation… Media are showing empty reality shows, just as Turkish TV showed penguin documentaries when #OccupyGezi was coming to life. Istanbul and São Paulo are the twin faces of the Global Spring, a remix of the same shout. The same Brazilian tear gas is being used in Istanbul’s Taksim Square and Avenida Paulista in São Paulo. It is the gas of neoliberalism.

“You are not a mature movement because you don’t identify your leaders”, said Fernando Haddad, mayor of São Paulo, after the huge protest on June 13th. And the meme warriors responded in a collective text:
“It is you who is not being mature, because you don’t understand the
new logic of activism, self-organization, intelligence and collective outrage”.
A nice detail of this still growing, networked Brazilian revolution was the open letter that Movimento Passe Livre (the collective that made Brazil burst) sent to Dilma Rousseff, Brazilian president, after being invited to a meeting: “This invitation is a surprise. We hope this means that Government will change its position and that dialogue will extend to other causes”. Movimento Passe Livre stated that there were no leaders at all. They are the 99%.

Power focuses on public transport fees. And Government tries to find any kind of leadership. But the Brazilian meme is being remixed in Twitter, Facebook, YouTube and social media. Just as with Istanbul´s protests, which quickly moved beyond Taksim’s Gezi park demands, the Brazilian protest is now beyond #PasseLivre (free pass). A better public transport – even a free transport petition – is still an important demand in cities like Florianopolis, Belo Horizonte, or Recife. But the desire is bigger. The Direitos Urbanos collective – based in Recife, an important city in the north east – is fighting for a better city, from transport to ecology. #EuMePrepresento (I represent myself) is working on a national demand for an open democracy.

And the meme is mutating. First It was #OcupaCopa (#OccupyWorldCup), with crowds in several cities protesting the World Cup and economic speculation. It was #VemPraRua, a kind of “take the street”, spreading throughout the entire country.

It is not just about transport fees (although it also is, yes). It’s the economy, stupid. It’s Global Spring, stupid. It is #Vdevinagre, a mock tag that denounces the fines given by police to protesters using vinegar to protect themselves against tear gas. It is a remixed images flow feeding

From Arab Spring to Occupy Wall Street. From 15M-Indignados to
#OccupyGezi. From #YoSoy132 in México to #VemPraRua. It is the
same global noise. But mass media iisn’t paying attention to this
huge emotional network, to this upcoming meme war.

Brazilian jammers don’t want Brazil to be a ‘big economy’ if that means
being an unequal country. They don’t want to be a BRIC, if that means
taking loans and destroying the Amazon forest. They just want bikes and
networks, public space and music, open data and love, freedom and food
without transgenics, hugs and copyleft ideas. They just want to remix Emma Goldman´s hit: “if I can´t dance, it is not my revolution”. Let´s dance, #BRevolution, as Çapulling movement does in Istanbul´s streets & squares.Dança na rua, Brasil. #VemPraRua