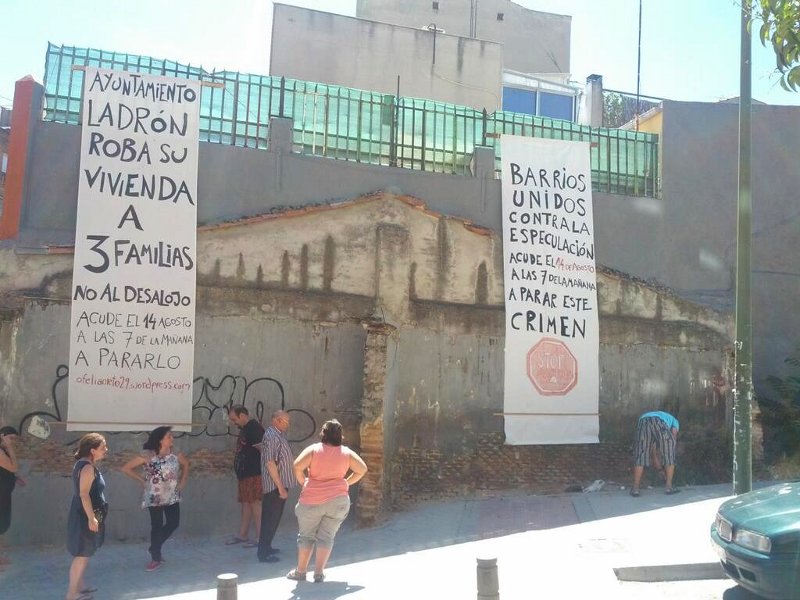 The fight of the Gracia-Gonzalez family against Madrid’s city hall tear
down threat accomplishes one week. It was in the morning of August 14th
when the city police arrived to their home at Ofelia Nieto 29 with the
intention of tearing down the building. The reason is 6 squared meters of sidewalk that urbanistic regulations put over their property in 2004.
Since then the family has been fighting against Madrid’s city hall. But
police found more than seventy housing right activists inside the house.They were called to camp in the penthouse the night before and some of them even clamped themselves to the roof.

Since then there has been a continuous camp at the penthouse. Multiple
activist have taken shifts in order not to leave the house and the family alone. Police has not tried again to take the house, but they can come at any moment, as the eviction order for the building allows them to enter until the end of august.

But activists have not limited themselves to be waiting for the arrival of police to the house. On monday 19th they brought their fight to the doors of spanish olympics committee, with the aim of signaling them as promoters of real-estate speculation in Madrid. In fact, Madrid 2020 and Ofelia Nieto 29 are faces of the same problem. Madrid 2020 steals money from the workers to put in the hands of big construction companies as Grupo Ortiz. At Ofelia Nieto 29, Madrid city steals benefits from future promotions in the property to put them in the hands of Grupo Ortiz Again. This company is under the shadows of Gürtel corruption plot. At the same time, the family and other activists occupied the urbanism office to call for a paralyzation
of the illegal process. Unfortunately, they didn’t get anything from them and were evicted by the same policemen that went to the house.

The fight will follow in the following days with new actions. Activist
will keep camping at the penthouse and will be taking part in new actions all along the city to visibilize the violence that Madrid puts on their citizens, prioritizing speculation over people’s lives.

All of us live at Ofelia Nieto 29