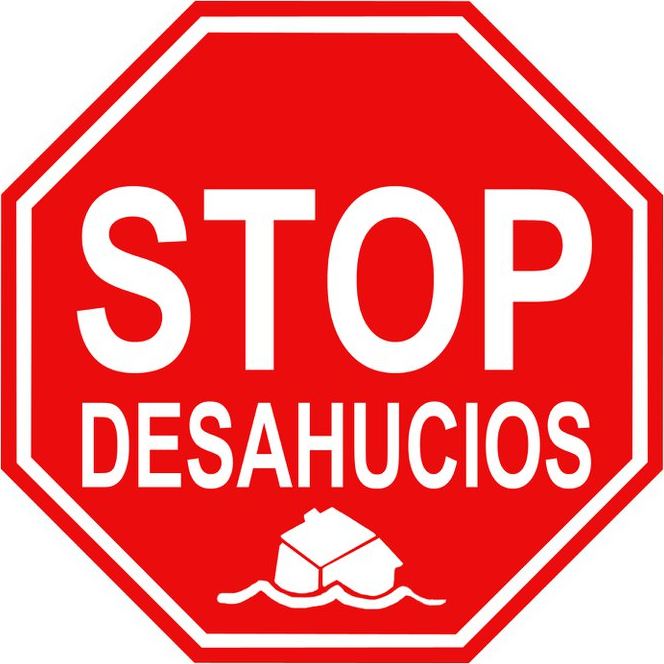 This coming Friday 13 building are to be forcibly evicted from their homes by riot police pushing their way through protesters who try to prevent these cruel and intolerable acts from taking place. The unfortunate families will literally be dragged out of their homes and thrown onto the street in the view of the public whilst their children are led into a van and taken away from them. These outrageous acts are promoted by the Town Hall´s Municipal Housing Company (EMV) which was created to facilitate living quarters to those in special need. However the reality is that it is a creator of this special need, pitilessly evicting without providing any alternative dwelling whatsoever.

The riot police will break down the doors of the flats as protesters
within push heavy furniture against the other side to sustain it as long as possible until it no longer fulfills its function and the police enter to pull out the protesters and the families. Meanwhile the broken wooden door that had offered protection to the family is replaced by a heavy cast-iron door like the one shown above, carried and installed by a four man team, and which serves to shut out the stark reality of homelessness in Spain.

The building is in Unanimity Road, adjacent to other roads named Goodness, Generosity, Happiness, and Conciliation, qualities blatantly lacking in the EMV and more befitting the camouflaged newspeak of Big Brother. The evictions are a disgraceful emulation of the Nazi´s evictions of Jews in occupied Paris. Those that are to be evicted are Dolores, separated from her husband imprisoned for knocking her unconscious, together with her ten year old son and fourteen year old daughter. The single bedroom 30 square meter flat has been her home for twenty years. Hazar, a Syrian lady, divorced and alone, unable to trace her family in the destroyed city of Homs, together with her four Spanish born children, after having lived in the flat for over three years. Coral, too upset to relate her story,together with her baby and her husband. All these mothers suffer sleepless nights and receive treatment for depression. of September three families living in the same community

This coming Friday would have included another eviction had not the
frightened mother, only a few months pregnant, fled with her husband for fear of having an abortion provoked by the oncoming anxiety.

Needless to say the evicted are previously subject to a harrowing mobbing campaign on the part of the EMV which includes numerous cuts in the supply of electricity, lack of repair of dangerous fissures in the walls, lack of fumigation of the little used subterranean car park, the breeding ground of cockroaches that invade the flats and oblige the families to fumigate them.
And rats, seen in the interior garden where the children play, and which obliged the neighbors to clean up and assure there were no organic residues, another maintenance task abandoned by the EMV.

While you are reading this these families are suffering the drama of
knowing that there hopes for a decent future are to be smashed by a
dysfunctional housing bureaucracy overseen by complacent or corrupt
politicians.