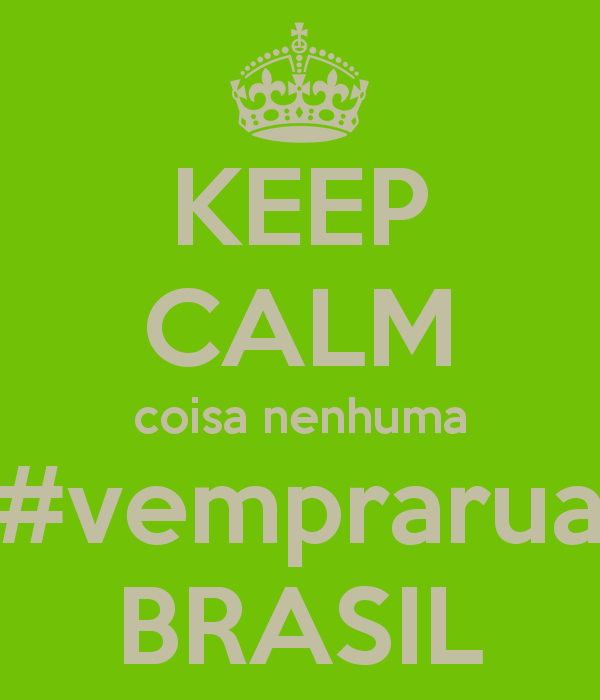 In one of the mailing lists of our networks, this info was post as an update to what is going on in Brazil. So we want to share it 🙂

This week has seen a phenomenal refusal (again) of people in Rio de Janeiro, Brazil to be intimidated off of the streets of Rio despite masses of police violence. As, more or less (*), the last continuing street protests and occupations from the earlier wave this summer across Brazil, three key factors have come together to bring an amazing and dynamic energy to keeping going despite beatings, arrests, injuries and so on.

1)
There has been a long term outside occupation of the Câmara Municipal, Rio’s legislative body. Called Ocupa Camara, the protest has been both inside (and here) in occupation and then outside for a number of weeks. The camp is like any Occupy with tents and banners and meetings and demos. Plus also some creative additions to the landscape (here traffic bollards redone as grave to the politicians inside!).Worth describing the site, as the Câmara is right downtown in the Centro zone. The building is on Cinelândia, a major public square where people hang out in two long-term local cafes, there is the large and newly cleaned Theatro Municipal that somewhat disgustingly now towers over the homeless people who live there too and the coming and goings of the cardboard collectors (for recycling cash) and the street sellers of sweets and crisps and stuff. It’s also next door to Avenida Rio Branco, a central and large and noisy road that traverses the downtown area. So blocking that road is significant when it happens. Interesrtingly on Tuesday night during the protests the Theatro suspended it’s current opera (due to tear gas outside seeping in) as people chanted outside ‘The bourgeoisie are too blame!’. The regular Film Festival at Odeon at Cinelândia was also cancelled on Tuesday due to the protests / gas.

2)
Then the last few weeks has seen a citywide teachers strike by education workers organising in SEPE (State Union of Education Professionals). This is has been quite strong and somewhat a new site of struggle again as the last Rio city teachers strike was a decade ago. There have been some Rio State teachers strikes in the last few years but the more usual education strikes have been in the higher education sector – Rio has seen some long university strikes in the last few years. The teachers have also now been camping outside the Câmara as well in protest against a plan to attack all the usual wages and conditions of the City school teachers plus arguing that public schools have to offer a quality education and not just be let to decay even more. So the City plan is a typical sort of restructuring that we know very well from…er…everywhere else.On Saturday 28th Sept at 9pm, without any a warrant and as requested by the Câmara, police attacked the camp / demo using stun guns, tear gas, pepper gas and the usual beatings. You can see here in the video how intense this was (even if you only watch the first two minutes or so up to the usual Rio cops tear gas-a-go-go party). The occupation was evicted.What’s been great all along in Rio is that people just won’t give up the streets despite months of police violence and repression – 6th September, cops had gone to the homes of the young people doing the Black Bloc Rio facebook page and arrested them due in part to them finding knives and a V for Vendetta (!) mask at their house (pictured somewhat ridiculously here). They had been remanded in custody but are now out. In immediate response 100 people tried to occupy the Central Court of Rio with some aplomb and in solidarity with those arrested. The cops were also sending letters to people they were accusing of organising a lot of the street demos in an attempt to intimidate them. Also this for shock horror proof of a young punk’s ‘stance in relation to the Brazilian state’. The cops have started to do more intelligence on who is who. More filming of demos and so on. Interestingly this often backfires when they release some of the more salacious parts to the media. There was the film they released of ‘black bloc’ people preparing and throwing two molotovs at the cops in the demos outside the house of Rio Governor Sergio Cabral.

Through a painstaking detective-like comparison of videos from youtube and so on, people showed what was obvious all along that the ‘black bloc’ types were cops! That long video is here.The cops are still at a loss to know how to deal with these protests strategically if by comparison you look at the Met’s total policing for demos. The usual cops, the PM (Military Police) are the ones responsible for public order and are the kind of grunts of all this. They are often scared despite their zeal in chasing people to beat them far and wide and exemplary displays of dehumanised violence on folks. They have some kit (gas masks, riot shields) but not much. But they are in fact still maintaining the policing model devised during the dictatorship and a model that contains a generic will to kill quite easily. Beating people only increases the will of people to come back out to resist through sheer numbers despite the ferocity of the assaults. Added in now is also the new stun guns the PM have just got.

Then there are the Choque cops who are the robo-cops – full body armour and sinister black vehicles etc.and the utmost psychos. But the PM and Choque cops are still unable through sheer violence to stop people coming out to the streets to demonstrate. The teachers and others re-established their camp on Sunday. Then on both Monday 30th and Tuesday 1st at night despite repeated police charges and massive use of gas people just gathered and re-gathered at the camp all night long. There were more and more people coming out in support as a result of the police actions. There is real determination to support the teachers but also the ongoing rage against systemic police violence. You can see in this video from Monday both the fear of the police despite their terror tactics and also the overwhelming energies and passion of people to be together and to resist this repression. The first minute is lovely – and not just cinematically !!

On the streets the mood is one that recognises the importance of this moment of constantly reclaiming the city and it’s common spaces in the face of a State strategy to criminalise street protests. There seems to be some kind of phony social contract sought that says ‘we gave you a better economy based on cheap credit and a lots of new Chinese so don’t complain!’. Dilma, the President, has been silent on the protests and the violence for a few months but recently gave a speech in which she outlined how the country needs more ‘engineers’ to aid growth. Exactly the economic strategy of the dictatorship – development at any cost!The proposed restructuring plan for the teachers was also passed by the councillors during the tumult at the Câmara Municipal on Tues night. Earlier this week teachers re-voted in an assembly on the steps of the Câmara to continue the strike and once more today (4th) in an assembly that the strike stays on. Teachers and supporters are organising a big street gathering on Monday 7th at Candelaria, Rio’s big Church, close by to Câmara and the site of one of the worst police massacres of homeless kids in 1993 (eight young teens died in the assault).

3)
The third factor of these demos is the loose crowd of folks that is called ‘Black Bloc’ and which is both a proper Black Bloc (i.e it has all the usual BB trappings and more) but also just other people who are masked up, the much hyped by the media ‘Vândalos’, “Bandidos’ or the ‘Mascarados’. Interestingly the BB is referred to by the media as ‘Black Bloc’ and not as a translation into Portuguese, ‘Bloco Preto’. Proof that the BB is a pretty successful brand maybe?Both recent nights have seen some trashings of banks and the usual symbols of capital. But more salient is the the tangible acceptance of the presence of this more militant protest within the general demos. Not only this but how the presence of the Black Bloc can also act to bring a determination to face up to the cops or in parts to attack back. Of course, this is not to say that this only comes from having a more up for it self-identified groups of anarchos / others present. From the videos you can see right away that the composition of the crowd defying and being in the face of the cops is super mixed. The BB stuff certainly helps though.

As one teachers placard read on Monday – ‘The Black Bloc don’t beat teachers!’.Funny BB stories abound between the recent and somewhat beautiful political act of BB people giving Free Hugs to passersby at Cinelândia on Sept 2nd to counter the law that was proposed in emergency from the politicos about banning masks on demos, to the testimony of an elderly woman protestor who wrote about how two young BB boys looked after her after she had been terrorised by the police, to how some young teens in the BB were setting up a study group of Brazil’s own Carlos Marighella’s Minimanual of the Urban Guerrilla!!Definitely interesting that the usual and initial denunciations that came from both the State, the cops and …er some parts of the Left about the BB being fascists, cops or un-usefully out of control has not been taken up as a truth by the continuing protests. Anyhow, in the aftermath, there is now some attempt at ‘disentangling’ from the PT (Workers Party). Although they are the government in power in Brazil, in Rio they entered into a crazy alliance with the centre-right PMDB (Party of the Brazilian Democratic Movement) although this doesn’t mean much as the ruling coalition is made up of dozens of parties although the PMDB are both the Mayor of Rio (Eduardo Paes) and the Governor (Sergio Cabral). PT in Rio was unable to contest the election for Governor due to it’s feeling that it lacked anyone strong enought to win against Cabral. It’s a pretty much fucked up party political clusterfuck in Rio, for what it’s worth.In the swell of anger and determination, there is a spread call out now for 15th October to be a more generalised demo against police violence.

—–(*) In Sao Paulo there has is now an occupation in progress since yesterday at USP, the big university, after a demand for direct election, amongst other things, of the University chancellor. On Monday students rather (ahem) forcefully tried to enter the meeting of the USP board to demand these elections. Photo here and here and here of attempted force.