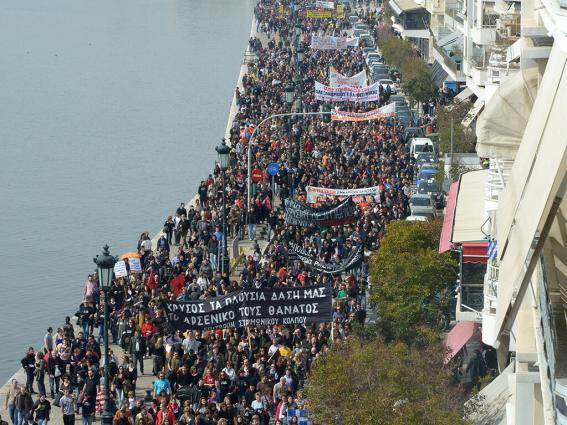 Under the pretext of the country’s devastating financial crisis, Greece was considering opening up all gold mines across the country despite their huge environmental impact, as they were said to create jobs and pour hundreds of millions into the economy.

The background for the purchase of the land is that in December 2003, the assets of Cassandra Mines in Halkidiki that were previously owned by TVX HELLAS were transferred to the Greek State for 11 million euros. On the same day, they were sold to HELLAS GOLD S.A. for the same price without prior economic assessment of the assets and without an open competition.

This transaction has been found by the European Commission to be in violation of EU competition rules and Greece was ordered to reclaim 15.3 million euros from Hellas Gold. This sum has still not been reclaimed; instead the Hellenic Republic challenged the validity of the Commission’s ruling at the European Court of Justice. Furthermore, this concession exempts the company from any transfer tax or other taxes and relieves it in advance from any financial obligations concerning environmental damage resulting from previous operation of mines.

Greece’s major miner, Hellas Gold holds mining licenses for an area covering 317 square kilometers with proven and probable reserves of lead, zinc, silver, gold and copper. The transaction was ratified by the Greek parliament with law 3220/2004. Right after ratification from parliament, “Hellas Gold” started selling pieces of the Cassandra Mines to other parties, at a huge profit for shareholders no benefit for the state. By late 2007 the mines were 95% owned by the Canadian “European Goldfields” and 5% by the Greek construction company AKTOR.

The method of “flash smelting” they claim that are going to use:

(a)   has never been applied on an industrial scale for the production of gold;

(b)   does not give pure gold but mixtures with copper, lead and iron and there is no reported separation method. The company, most probably, will eventually implement the method of cyanation.

There is scientific evidence that the selected processing method (“flash smelting”) is not suitable for the specific type of ores of the Kassandra mines. If built, this plant will emit more arsenic into the environment than any other plant in the EU. In fact, the Finnish company Outotec who developed the flash-smelting technology has expressed serious reservations for its application as proposed by European Goldfields/Eldorado on an industrial scale. It is a great cause of concern that this plant has been approved by the Greek government for construction in a densely populated, tourist area.

In July 2011, the Greek State approved the Environmental Impact Assessment after a shockingly ostensible public consultation. According to the Greek Mining Regulation:

In theory, mining activity can be sustainable only if it does not alter the character of a region, and developmental if it is carried out in the overall interest of society. This includes the assurance of public interest, the existence of reliable inspection mechanisms, and long-term preponderance of overall benefits over negative impacts. None of those criteria are met by the “investment” plan of the Hellas Gold S.A.

The copper-gold Skouries project is the “crown jewel” of the Greek mines but it is also the main source of conflict with the local people. The mine is located on top of Mount Kakavos which holds the largest fresh water reserves in the entire Halkidiki. In order to mine, Eldorado plans to de-water the mountain, lowering the water table by 300-400 m., with serious consequences for the whole of Halkidiki. According to the company’s environmental study, dust emissions from the open pit mine will be a staggering 2.100 tons per hour.

Since late March 2012, Eldorado Gold has fenced of large parts of the mountain with barbed wire, placed security guards and traffic control systems and started razing the forest in order to construct the open pit, processing plant, roads and tailings dams. The area is extremely valuable from an ecological point of view as it has a unique 95% forest cover, part of which is ancient (old-growth) forest.

It appears public sentiment is firmly against operations that would seek to restore the economy at the expense of Greece’s environment. At first, the protests were fairly low key, although there were times when the trigger-happy Greek police flung tear gas canisters at hothead protesters armed with flares, rocks and gasoline bombs. By the autumn of 2012, something akin to civil war had broken out.

The turning point came on Oct. 21 when about 2,500 protesters fought a pitched battle with more than 200 police along the forest road leading to Eldorado’s Skouries gold-and-copper deposit, the centrepiece of its Greek strategy. 14 people were arrested. Retribution came on the night of Feb. 16, when about 40 masked men invaded a Skouries work site in the forest, set fire to machinery and vehicles, and doused three security guards with fuel, threatening to burn them alive. Eldorado put the damage of the firebomb attack at $1-million (U.S.). Two men were arrested and another 18 are under investigation.

Abiding by the orders of Eldorado Gold extraction company, police forces imposed a regime of occupation in Ierissos, conducting continuous house searches, interrogations, arrests to take DNA and detentions, an Orwellian reality that residents of Ierissos and the neighbouring areas were forced to experience. Governmental forces threw in the dustbin every pretext of ethical and social legitimization. They were doing so because they could, using violence and blackmail.

The new cycle of persecution included 16 people forced to give a DNA sample, while there were new summons to more “suspected” people to go through this humiliating procedure, having no access however to court files and lacking specific bill of indictment or testimonies that would implicate the people summoned.

However, this form of persecution came face to face with the proud people of Ierissos, who fought back and self-organised their lives and fight based on true solidarity and a sense of social responsibility and participation, thus representing contemporary dignity in revolt. Through their struggle, they managed to shed public light on the disgrace of profiteering and plundering on nature throughout the Hellenic and international society, turning peoples’ eyes to their own example.

In July 2012, after his visit to Skouries, Halkidiki, the Greek-Canadian federal MP, Jim Karygiannis, said he felt wronged as a Greek. Paying a visit to the company’s facilities, he was faced with an attack by a security company and witnessed illegally cutting trees.

In 15 July 2013, there was a massive gathering in Polygyros, which grew into a fight between the supporters and opponents of the project. The union of the activists against the development of the deposits reports that the miners had vandalized a car in the centre of the village first. The spirits rapidly ran high and the two opposing groups started quarrelling first and fighting later. According to the information of AMPE agency, the miners had rushed into the house of one of the activists and caused damage to it. The residents of the village of Megali Panagia have filed a complaint of assault against the employees of the gold mines in Halkidiki.

On 16 July 2013, Eldorado Gold announced that it would defer an expansion, slow development of projects and review its dividend policy after gold prices dropped. According to Reuters, Eldorado Gold Corp said it will cut 2013 capital spending by 35 percent and push back the start of various projects, making it the latest producer to curb spending in response to low gold prices. The Greece delays will take place at the Perama and Skouries sites, where Eldorado is up against firm opposition from local and environmental groups.

The fall of gold price lately led many mining companies to review their plans. In a Reuters’ report, a financial analyst said that it is very difficult for mining companies to cut spending in order to meet the reduced price of gold, and the author predicted that many of these companies will completely stop their activities.

For residents of Halkidiki, this review of the production plan and the delay of the “investment”, does not mean in any way complacent. It is a serious development with ambiguous readings, and not only due to the price of gold. The company has already stopped many of its projects, due to law violations and after official complaints of residents. At the same time, the strong, durable and dynamic resistance of the residents creates serious problems for the company, which, in no way has ensured social consensus and social license in order to be able to operate in the region.

–          For a detailed description and the full history of the issue, see here: http://www.nomines.org/en/the-issue

–          A Canadian company, the police in Greece and democracy in the country that invented it: http://antigoldgr.wordpress.com/2013/06/17/a-canadian-company-the-police-in-greece-and-democracy-in-the-country-that-invented-it/

–          Reports from the edge of borderline democracy: http://borderlinereports.net/2013/02/23/report-gold-mining-in-chalkidiki-part-1-greek-governments-in-the-service-of-mining-companies/